Rebecca Grafton told POPSUGAR that after college, "My weight ballooned up higher than it had ever been before." After graduating and living on her own, cooking all her own meals, and drinking more alcohol than she had before, Rebecca said, "It got to the point where my body was changing so much — my face showed the weight gain so much that I couldn't even recognise myself in photos anymore." 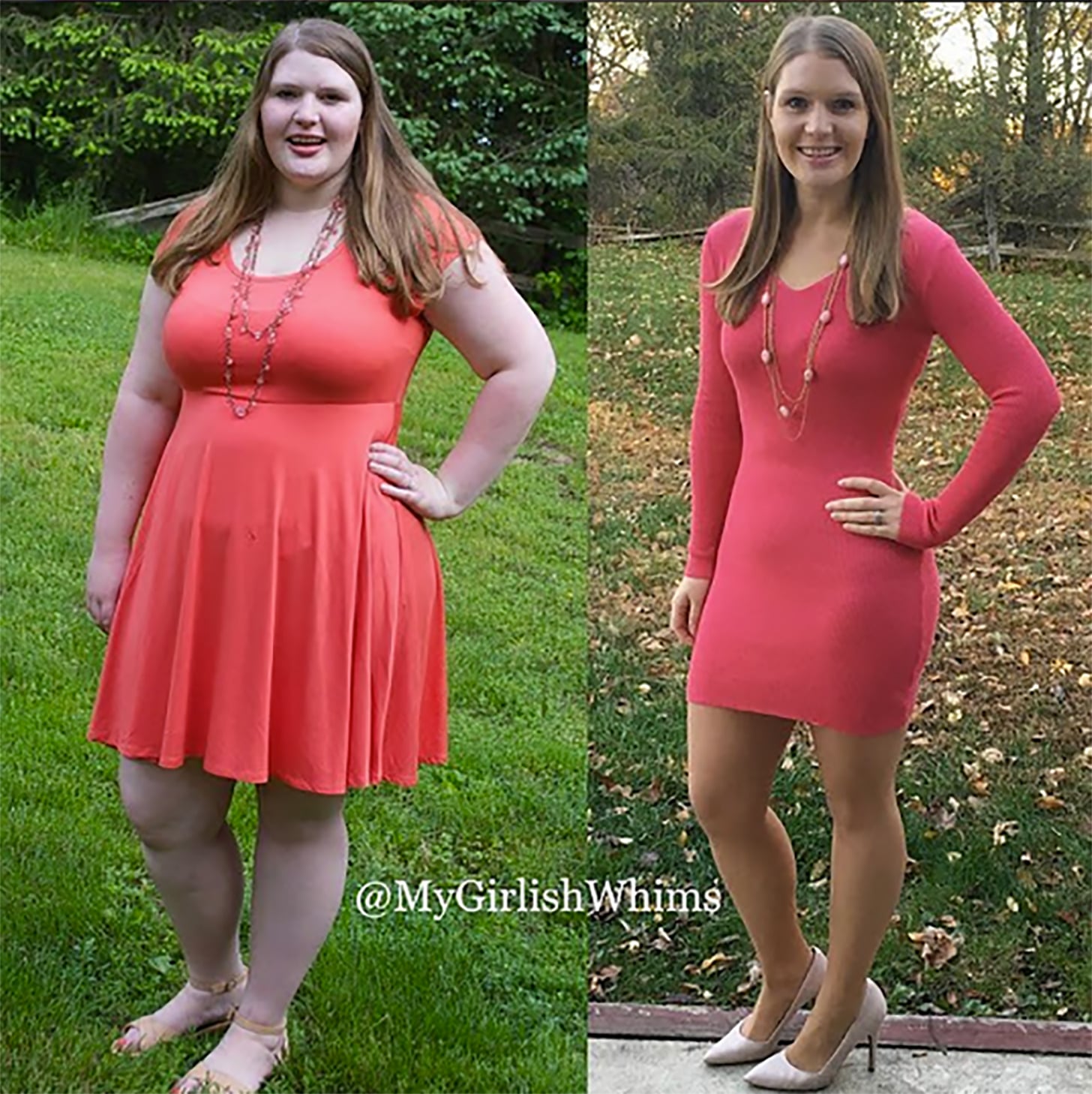 After scheduling a holiday to go to Jamaica in May, Rebecca began her weight-loss journey on January 13, 2014. She said, "I didn't want to look back on all the pictures from my trip to Jamaica and not be able to remember how much fun I had because all I could see was how fat I looked in the photos."

Beginning at 17 stones, 5 pounds, Rebecca lost an impressive 7 stone, one pound in two years. Here are the three things she did to drop the weight and keep it off.

1. She Tracked Her Calories

Rebecca explained, "I first started by tracking my calories, using the app My Fitness Pal. The app set calorie goals for me, and I would follow those goals and also add in the calories I burned from exercise. That worked for me until I stalled at 95 pounds lost. Then I switched to the If It Fits Your Macros (IIFYM) diet plan, where instead of tracking only calories, I track the grams of protein, carbs, and fats I eat and have specific goals and ratios for how much I eat of each macronutrient."

Related:
Kristina Dropped Over 7 Stone by "Doing Zero Exercise" in the First Year

2. She Allowed Herself to Eat More Freely Every Now and Then

At the end of the week, Rebecca said, "I gave myself some breaks." She followed the "80/20 rule of diligently tracking most of the time" so she could have a few days off without ruining all her progress. It's great to be consistent with eating healthy and watching your calories or macros, but allowing yourself some treats and a little wiggle room a few days a week can satisfy cravings so you can stay on track the rest of the time.

This is what a typical day of eating looks like for Rebecca: 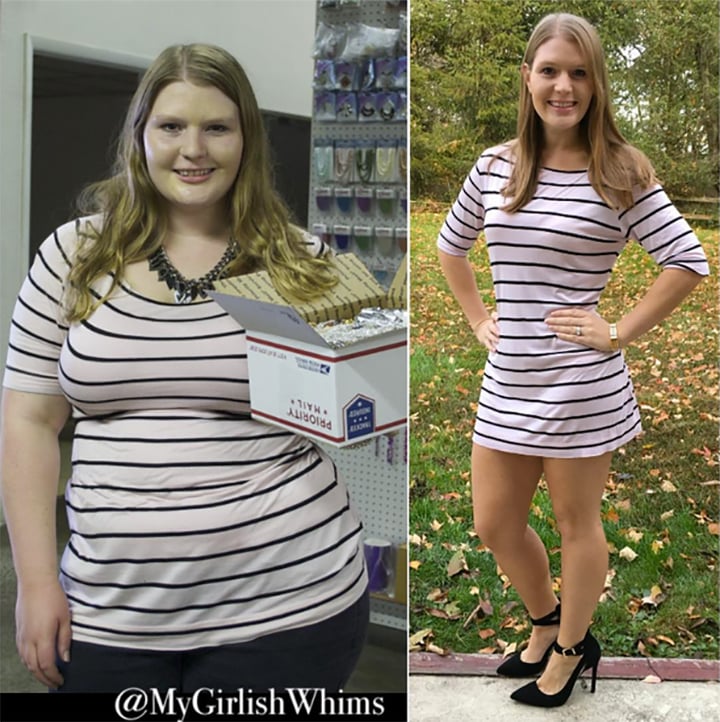 3. She Worked Out Nearly Every Day

Rebecca shared, "I typically work out every day for about an hour." Here's what a normal week of workouts looked like for her. 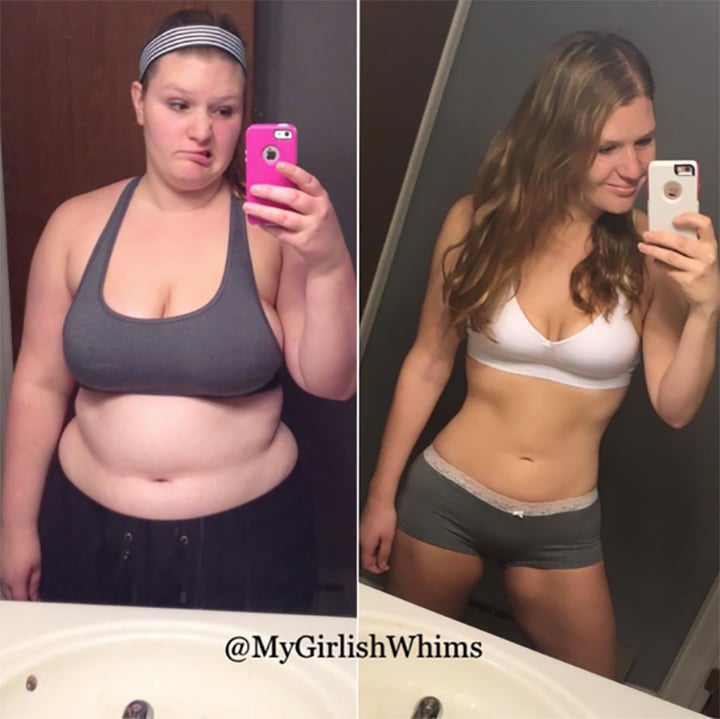 Seeing the numbers on the scale decrease was huge for Rebecca. But since she was always heavy, she also shared that "seeing my body change was the craziest thing for me. My fingers shrunk from a size 10+ to a 7. And for the first time in my life, I had a flat stomach and was finally confident enough to wear a bikini in public. My face changed so much that once my mom didn't even recognise me while out in public!"

Rebeccca also gained a passion for learning how to cook food that tastes good and is still healthy. She also "started to really enjoy fitness. I was the girl in high school who huffed and puffed around the track for the one-mile run we had to do and was the last one to finish, and now I've completed two half-marathons!" 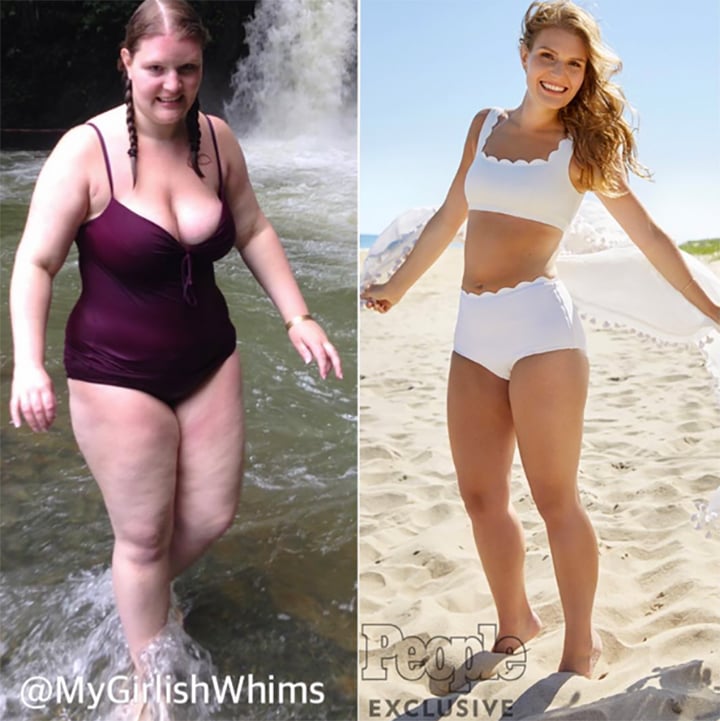 "I get constant comments and messages from women who say that because of me they had enough courage to step into a gym for the first time."

Rebecca stayed motivated at the beginning of her journey by reaching new milestones and goals. "Success becomes addicting!" she said. Now, at age 27, her motivation to maintain her weight comes from how her journey has impacted so many people. Rebecca told POPSUGAR, "I started sharing my healthy recipes, 'sweaty selfies,' and before-and-after photos on my personal Instagram account, MyGirlishWhims, way back at the beginning of my journey."

As she made more progress with her weight loss, her account grew, and she started reaching thousands of people who were following her for tips on weight loss, healthy living, and inspiration — she now has 137,000 followers!

Related:
Tiffany Went From a Size 2XL to a Small in 1 Year — and She Didn't Go to the Gym

Rebecca said, "I get constant comments and messages from women who say that because of me they had enough courage to step into a gym for the first time. Or because of me they decided to change up their eating habits and lost 10, 20, even 100 pounds like me, just from following along with my story and feeling inspired enough to believe that they were capable of making a similar change."

Being able to reach so many people, showing them that getting in control of their health and fitness again is completely possible, and seeing so many success stories that have transpired because of that is what truly keeps Rebecca motivated to keep going. 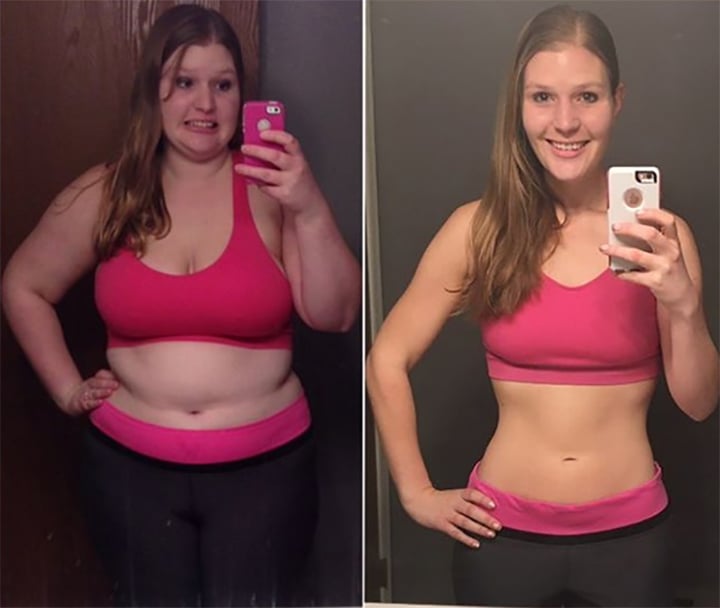 If you're on your own weight-loss journey, Rebecca said, "Never doubt what you are truly capable of achieving." Her first goal was just to reach 190 pounds and get back to her "normal weight" — the normal size 12 she had been most of her life. She excitedly shared, "I had NO IDEA I was actually capable of losing 100 pounds!" Once she truly focused all her efforts on weight loss and it became a lifestyle change, after she hit that goal of reaching 190 pounds, she knew she was capable of continuing on.

Related:
Gabriella Was Sick of "Being That Fat Girl With the Cute Face" and Lost 170 Pounds

Rebecca wants you to know: "You are so much stronger than you think: you just have to decide to start and stay committed, no matter how long it takes. There will always be bumps along the way. There were countless weekends where I ate like crap or drank my body weight in wine, but every Monday was a brand new start to stay committed to my goals. No matter how many times you screw up along the way, you just have to get yourself recommitted week after week, and eventually you will see progress!"

Image Source: Rebecca Grafton
Then And NowBefore And After Weight LossWeight LossPopsugar Interviews