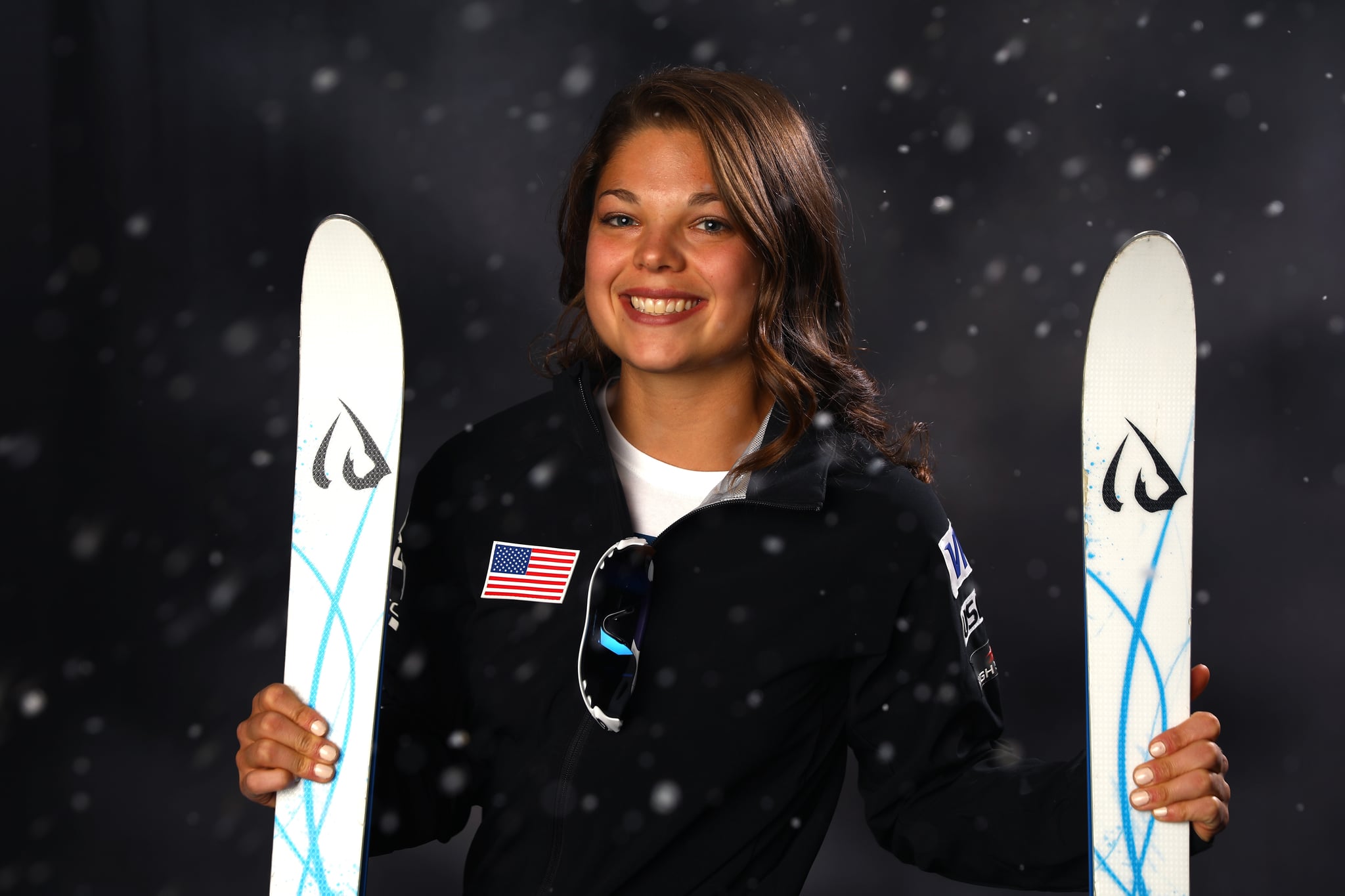 Ashley Caldwell is a slope-jumping, body-flipping, trick-landing force to be reckoned with. If you don't recognize her name already, you sure as hell will soon because the 24-year-old freestyle aerial skier is set to compete in the 2018 Winter Olympics in Pyeongchang, South Korea, marking her third time participating in the renowned competition. We caught up with Ashley to learn more about her exercise routine, eating habits, and what keeps her hungry for more jaw-dropping flips. Read on to learn more about the most badass chick on the slopes.

Rising to the Occasion

Ashley didn't always have her sights set on being an Olympic skier. She actually grew up focusing on gymnastics, which she started doing at the age of 3. But that all changed when she and her mother tuned into the freestyle aerial skiing events for 2006 Winter Olympics. "My mom looked at me and said, 'You'd be good at that sport,'" she recalled. "I was like, 'Mom, first of all, they're doing a hundred million backflips and I can't do that. But also who tells their 12-year-old daughter they should go do that?'"

"It was a pretty fast turnaround from first seeing the sport in 2006 to walking into Opening Ceremonies in 2010."

At that point, she'd been skiing recreationally and doing gymnastics for nine years, so she just brushed off the suggestion — until her mom signed her up, almost without her knowing, for a Summer ski camp at Whistler Blackcomb, a renowned snow school in Canada. From there, things escalated pretty quickly. "Within two months, I had tried my first backflip at the water skiing classes, met the entire national team, quit gymnastics, started online school, and moved to New Hampshire," she told POPSUGAR. On her 14th birthday, she was living by herself a couple hundred miles away from her parents, but it was all worth it because after just two — yes, only two — years of training, she made the Olympics team at the age of 16. "It was a pretty fast turnaround from first seeing the sport in 2006 to walking into Opening Ceremonies in 2010," Ashley admitted.

Though Ashley didn't medal in either the 2010 or 2014 Olympics, she's certainly earned her fair share of street (er, snow?) credit while on the slopes. She was the first US woman to land a trick known as a full, full, full (note: a full is one flip with a 360-degree twist). As if that wasn't crazy enough, Ashley is also the second woman to cleanly land a trick referred to as "The Daddy," a quadruple-twisting triple backflip. Is your head spinning or what?

Of course, sticking the landing of such huge tricks requires quite a bit of physical strength, and the Olympian gave us the scoop on some of her go-to moves. Ashley told us that her favorite exercise for maintaining muscle mass is front squats, which she feels often take the back seat (pun fully intended) to back squats, which are more popular. "They really, really help your core, and especially for someone like me who's landing forward, that's important," she noted. Another one of her favorite moves? "This combo routine where you have the bar held as a front squat and you do a reverse lunge on your left leg, reverse lunge on your right leg, and then you do a front squat. And then you do that three or four times through. It's really tough and I feel like I'm getting strong." See it in action below.

"I haven't done that floor core in a really long time, and I feel like I'm stronger in my core and feel and look fitter than I ever have before."

Besides using front squats to engage her core, the skier also relies on a host of other exercises to work her abs. Whereas she formerly did lots of floor exercises like v-ups and situps — "the same thing over and over again," she joked — she decided to switch things up two years ago. "Now I do a lot more stabilization — so holding a weight above my head or doing cable pulls — where you're moving around, but you're trying to keep your core stable and engaged. It has really made a difference in how strong and stable my core is, versus just the normal burning crunch routine. I haven't done that floor core in a really long time, and I feel like I'm stronger in my core and feel and look fitter than I ever have before," she said.

Related:
Tone Your Muscles Faster With These Stability-Ball Moves

Ashley is always on the go for her skiing career, which makes it hard for her to get the necessary amount of protein each day. "I struggle to stay away from the 'white food diet,' which is a lot of bread, rice, and pasta," she told us, adding, "There's a lot of times where you have to substitute meals because you can't find food in Moscow or China, or you find it, but you're not really sure what it is." To get the nutrients she needs, Ashley relies on supplements like Rockin' Protein, a protein shake brand for which she's an official ambassador.

Ashley describes herself as an "eat to feel good kind of person" because of what her sport entails. "As an athlete, especially one that does a lot of backflips, making sure my stomach feels good is sometimes pretty hard," she told us. "The foods that may be the healthiest for me aren't necessarily the foods that don't make me nauseous before I go do triple backflips. What I feel good eating right before I train might be just some pretzels or tortilla chips." Heck yes — this totally makes me feel better about binging on tortilla chips. If an Olympian does it, it's not too bad, right?

"I'm huge on eggs for breakfast."

Her diet isn't all chips and pretzels, though. She's "huge on eggs for breakfast," usually opting for a spinach, egg, and cheese sandwich in the morning. Yum! While discussing post-exercise snacks, Ashley admitted she has "a big problem with eating right after a workout" because she usually fills up on water. In order to get her fill of carbs and protein to refuel, she usually eats a Clif Bar or something similar after leaving the gym, and she advises that others do the same. "If I don't, then I struggle the next couple hours or even days," she said. "It's crazy how much nutrition the day of training affects you two and even three days later. Your energy stores really build up over a couple of days."

How She Stays Motivated

We couldn't help but ask Ashley how on earth she stays motivated to work out so much and so consistently, and she gave us some insight into what she does each morning to prep. "I set my alarm — and then I set seven more alarms like five minutes after one another, so even if I turn off the one alarm, then next one goes off soon," she said with a laugh, adding that she makes sure each of her alarms plays music. Once she climbs out of bed, she makes a pot of coffee, usually adding a bit of Rockin' Protein to her mug instead of creamer, and pulls out her yoga mat to get the blood flowing until her body feels awake and ready to tackle the day. "It puts me in this mental zen instead of this mental sleep, and it's almost like a warmup for your warmup," she said of her morning routine. Just picturing a coffee-fueled AM yoga session is making us feel zen, too!

Related:
10 Ways to Make Self-Care a Part of Your Morning Routine

Ashley's fitness motivation stems from way more than just repetitive alarms and early morning yoga flows. The skier must dig deep to find the inspiration to keep hitting the slopes and trying out tricks like the aforementioned "Daddy." Whereas before she strove to keep up with her male teammates, her current focus is more internal. "It's really just jump as good as I can — making sure that when I go out and train and crash and compete, I'm not comparing myself to anything else," she said. "I really try to dig into myself and think about what I'm capable of today. That motivates me and makes me wanna prove to myself and show my own character and the kind of jumper I want to be. That means getting up from crashes, but it also means being smart and not getting injured."

"When you crash, it's actually one of the biggest opportunities to prove yourself."

Speaking of crashes, they have happened for Ashley, and yes, they royally suck, but the athlete pointed out a silver lining that she chooses to focus on when she doesn't land a big trick. "When you crash, it's actually one of the biggest opportunities to prove yourself," she said. "When I go out and I crash, the first thing that I think of — and it's probably a coping mechanism that I've developed over the years — is that I have the opportunity to go from the worst jump of my life and the hardest hit and scariest jump to the best one right now, and I have that opportunity and I'm gonna seize it. Some of my best jumps come out of my worst crashes because of that motivation." We can most definitely see how that wise mantra can apply to other fitness realms far beyond aerial skiing! 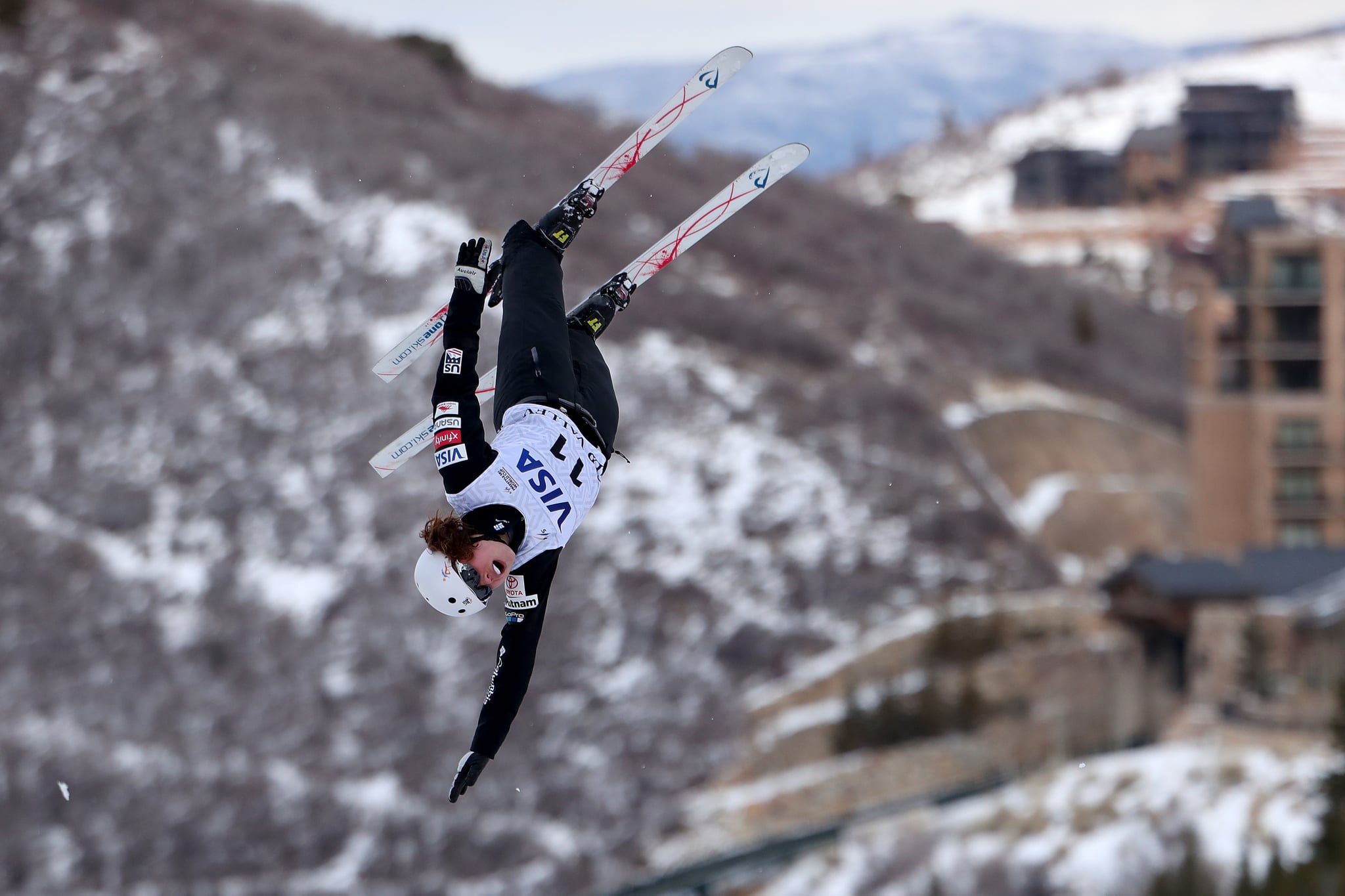 Her Overall Outlook on Health

Great power certainly comes with great responsibility. For Ashley, that phrase should perhaps be edited to read "with great crashes come great injuries." Ashley has suffered through her fair share of trauma during her career, the most notable instance being when she tore both of her ACLs, which took her out of the game for two years. "Sometimes you crumble off of that jump, but that's not to say there's nothing you can do [about falling during a jump]," she explained.

Ashley went on to detail how athletes must maintain a positive mentality and a solid approach to physical training to bounce back from such injuries. "Keeping your body healthy is not a three-hour-a-day deal. It's 24/7," she said. "It's making sure that if you don't sleep the night before, you take a training day off, and making sure you do the right warmups and cooldowns, you go ice when you're supposed to, you do your rehab exercises, you check in with your body on a day to day basis. Make sure you're not being stupid. You make sure you have longevity in your career by keeping up with those daily routines."