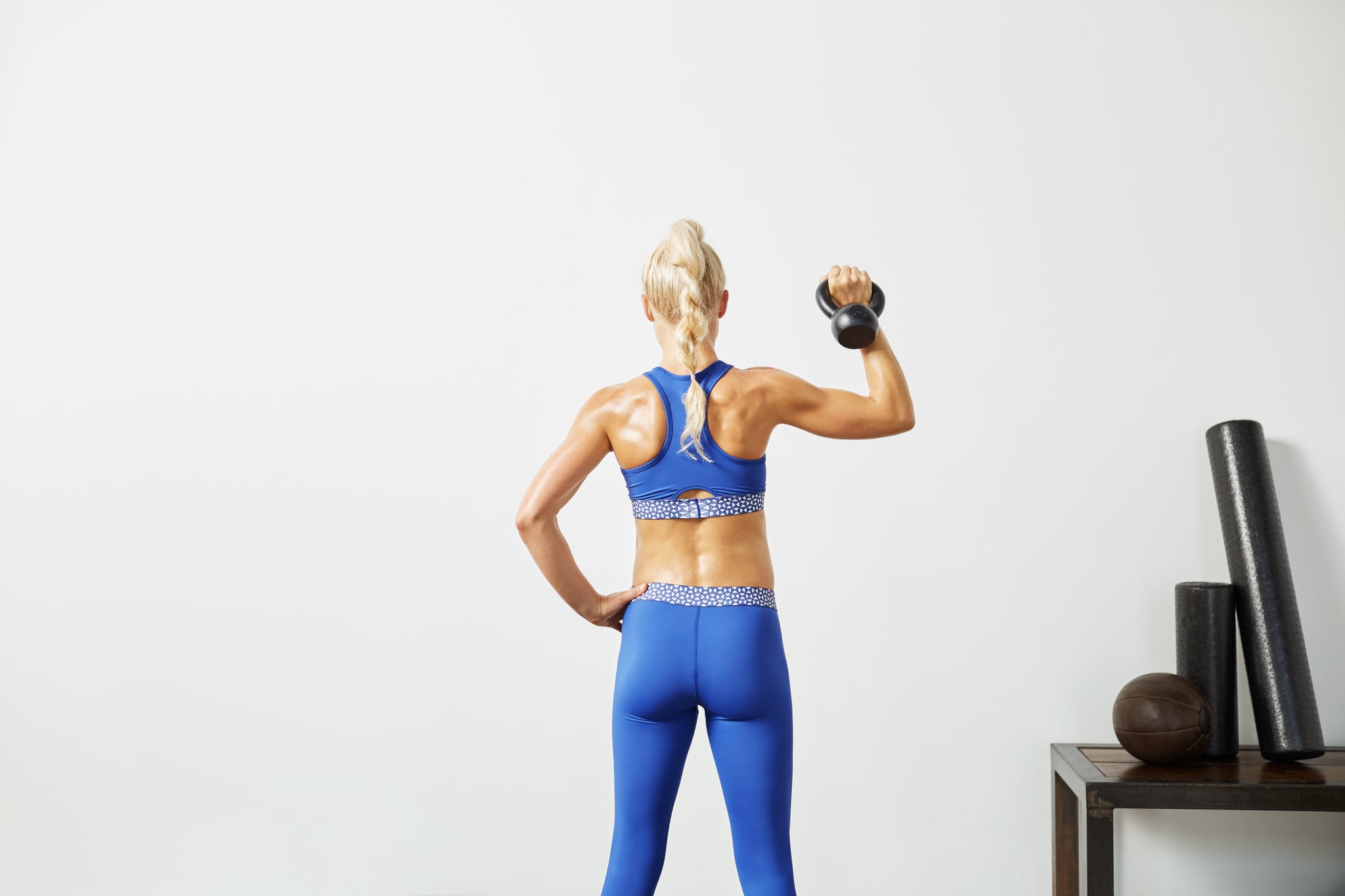 I recently sat down with DIAKADI personal trainer Liz Letchford, MS, ATC (and PhD candidate!), and lamented about how sore I was after a recent Megaformer class. "It's because of the eccentric exercises," she told me. Those slow and controlled resistance movements? "They leave you the most sore . . . but the good thing is that they also make you stronger."

Are you familiar with eccentric exercises? Liz shared that they're the best kind of move you can do for gaining strength. "You are maintaining the contraction as the muscles are lengthening, which creates a lot of tension on the sarcomeres (tiny structural bits of the muscle) which creates damage, so you get stronger . . . but also feel way more sore due to the damage."

Related:
Why Lifting Heavier Weights Helps You Slim Down, Not Bulk Up

Here's an example she described: you're slowly lowering yourself from a pull-up position instead of letting your weight pull you down. Or think about doing a bicep curl — you'd curl in quickly, then release much slower; curl in for one count, out for four counts. Make sense?

Try this: do a "negative" push-up. Start in a plank position with your arms and legs straight, shoulders above the wrists, core engaged. Take a breath in, and as you exhale, slowly bend your elbows, lowering your entire body to the floor for a six- to eight-second count. This counts as one rep and as an eccentric exercise!

Liz said that "by increasing your muscular strength and the body's requirement for energy (aka your metabolism), your body uses its fuel more efficiently." What this means is you're using calories and energy to "fuel your muscles instead of storing it as fat." She noted that eccentric moves create "strong muscles," which in turn "will increase your metabolism."

She also said it's important to note that "there's no such thing as 'long, lean muscles,'" but you also shouldn't worry about the idea of "bulking," because that's a myth as well. "Women don't have the physiological ability to get bulky," she told POPSUGAR. "Not without seriously training, eating [a very specific diet], and taking supplements and hormones. . . . We lack the levels of testosterone that help men gain muscle and metabolise fat easily."

"Your muscles will grow according to how much demand is placed on them," she said. "If you want the 'long, lean' look, it's about not training for hypertrophy," (think moderate to light weight but tons of reps) "but instead training for strength" (i.e. eccentric exercises!) "and following a healthy diet."

20-Minute Workouts
Want to Burn Calories With No Impact? This 20-Minute Sliders Workout Is the HIIT You Need
by Maggie Ryan 2 days ago

cardio strength workouts
Get Sweaty, Strong, and Shredded With This 30-Minute Cardio and Abs Ladder Workout
by Jenny Sugar 2 days ago

Instagram
Kickboxing, Pilates, and LIT Method: 3 Live Workouts to Get You Moving This Week
by Maggie Ryan 4 days ago