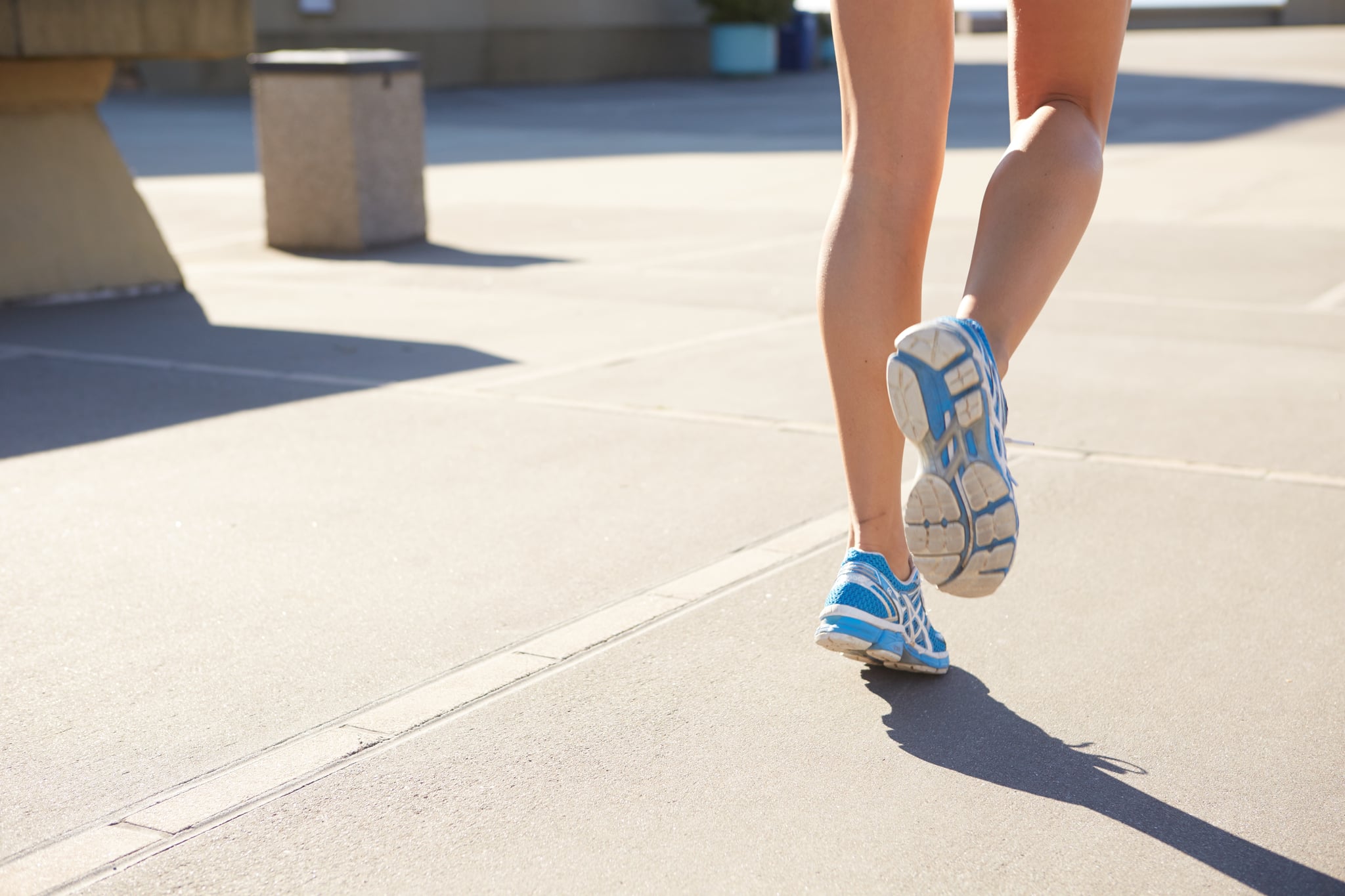 A couple of years ago, my doctor warned that my blood sugar levels had been consistently high for two consecutive years (one year is a possible anomaly, two years is a pattern). So high, she was worried that I was on the cusp of being prediabetic. I got the dreaded lecture, "You need to cut your sugar intake and lose some weight. You must exercise. Consistently."

I had prioritised family and work while relegating my self-care to nights in front of a TV . . . now I faced the consequences.

Back in the day, I used to be active: running, biking, swimming, Jazzercise (LOL), even kung fu (not kidding). But life — and TBH a touch of my own innate laziness — had sidetracked me. I had prioritised family and work while relegating my self-care to nights in front of a TV or cooking amazing desserts. I'm not abdicating; I made those choices, but now I faced the consequences.

Lucky for me, family and friends were ready to reintroduce me to a more active lifestyle. I started out slowly: walking, then hiking, and eventually working up to long-distance walks like half-marathons. I even joined a running group, San Diego's In Motion Fit, so I could improve my half-marathon walking speed.

My daughter Dominique, a POPSUGAR Fitness editor, consistently championed my journey and encouraged me to push boundaries. A recent conversation went something like this:

Me: "My blood sugar levels are improving, but I'm still not losing any weight."
Dominique: "You have to do cardio."
Me: "I'm walking and hiking."
Dominique: "Get your heart rate up. Try running with your group instead of walking."
Me: "I'll try."

I lied. I wasn't going to try.

I went to my Saturday group run with all my justifications lined up: a recent broken ankle, my chronic knee issues, an inability to keep up, it was too hot, it was too cold. You name it, I was prepared.

And that is when I accidentally ended up running.

In Motion Fit groups runners together by goal and by speed. I was with the half-marathoners in the 15-minute-mile group. That morning, I began talking to some women I thought were fellow walkers as we started walking that week's scheduled six-mile course. A couple of minutes in, they all began to run. As I was mid-conversation, I ran to keep up. And then they stopped. Whew, I was so relieved . . . the running was just a fluke. We walked for another minute, and they began to run again. Then walk. Then run, again. "What madness is this?" I questioned. 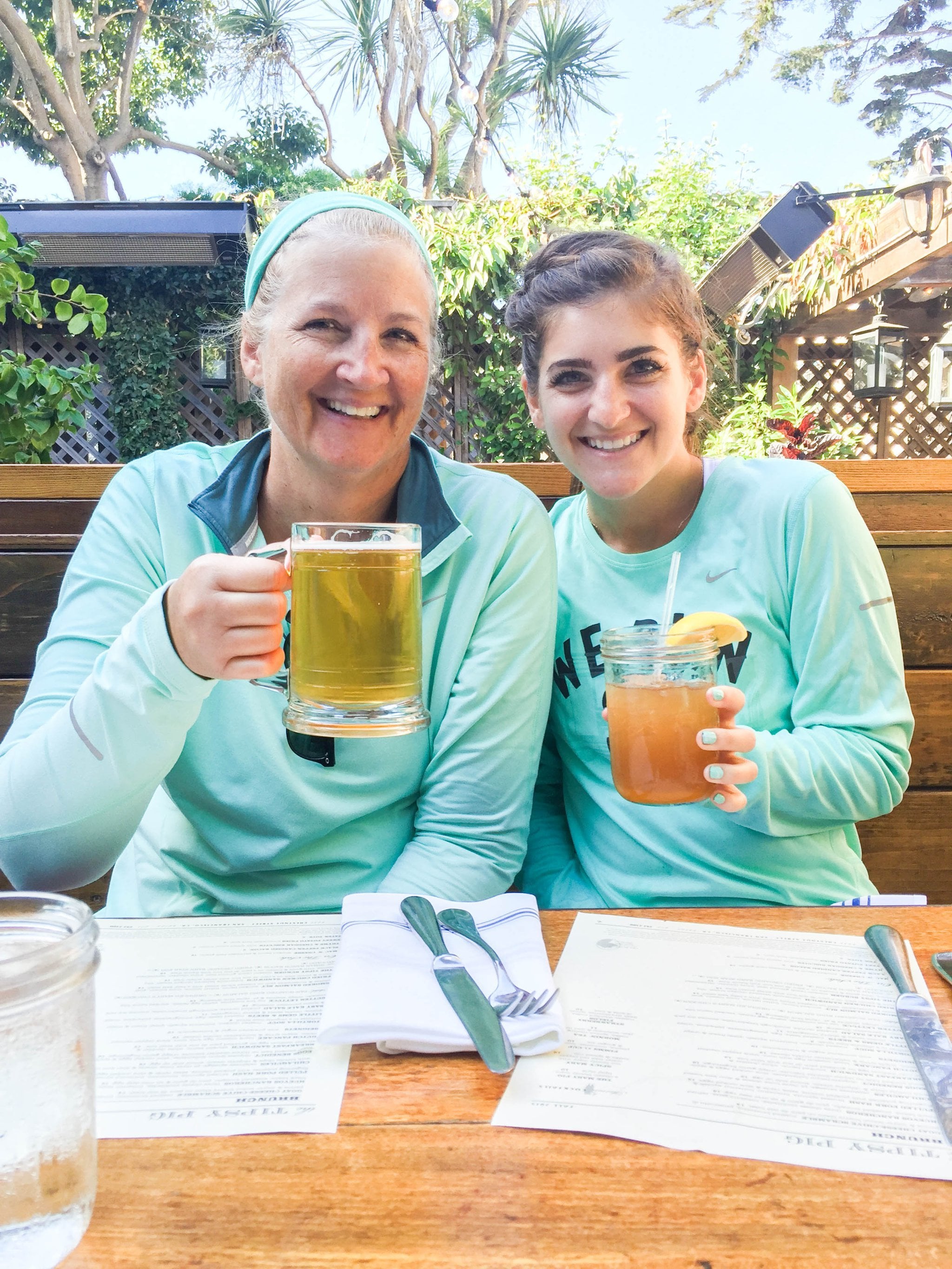 The author (left) with her daughter after a half-marathon in San Francisco.

Related:
3 Reasons New Runners Should Sign Up For a Half-Marathon (It's Not as Crazy as You Think!)

Well, as I said, I didn't want to be rude. And they weren't going that fast. I figured I could tolerate anything for 45 seconds. I would try it for one mile.

Six miles later, I was incredulous. I hadn't run in 30 years, and I had just run-walked-run SIX miles.

My health and fitness had just taken a turn for the better. I kept training with that group and I completed a half-marathon (13.1 miles) using the run-walk-run (RWR) method for the entire distance.

The method is as straightforward as its name implies: run — then walk, then run — for short, timed intervals, over any distance. I use the Nike+ app to track distance and the HIIT timer in the Seconds Pro app to time the intervals.

Recently, I ran into the person behind the RWR method at a Disney Half Marathon prerace expo; I noticed a long line of people waiting to shake hands with none other than Jeff Galloway, member of the 1972 US Olympic Team, former All American Collegiate athlete, author, and entrepreneur. I, too, stopped to thank him for changing my life . . . and he graciously told me I was doing it all wrong. 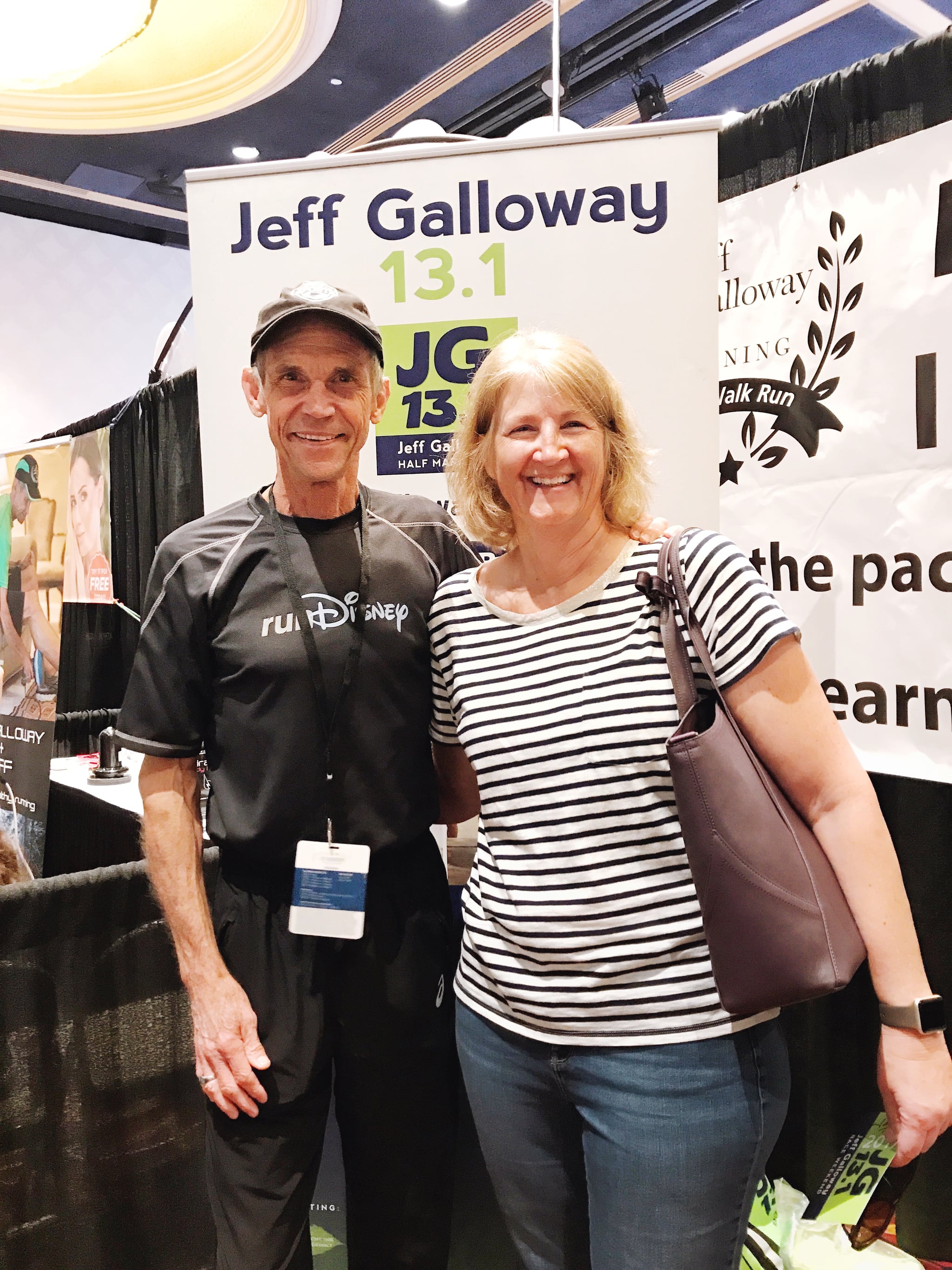 The author (right) with Olympian and RWR creator Jeff Galloway.

Well, maybe not all wrong. Galloway shared a few things that I might consider, like changing the interval timing for the pace I was striving to hit (13:44 to break a three-hour half-marathon) to 0:15 run/0:15 walk or 0:30 run/0:30 walk. He also suggested the walking interval never be longer than 30 seconds because as the distance increases, it can get harder and more tiresome to start back up from the walk to the run.

Related:
The 5 Worst Mistakes I Made as a New Runner and How You Can Learn From Them

I was further intrigued. I picked up his book The Run Walk Run Method ($20) and followed up with a call to find out what sparked him to create this training approach.

Galloway related that shortly after he opened a running store in the early '70s, he was asked to teach a running class. He soon realised that inserting walking breaks into the training was very beneficial to his beginners. At the end of the 10-week training, every participant was able to complete a 5K or 10K race. More importantly, he realised no one had suffered an injury, which was rather unusual in Galloway's running experience.

At the end of the 10-week training, every participant was able to complete a 5K or 10K race.

When I asked why he — a highly trained marathon athlete — continued to run this way, Galloway said, "I haven't had a running-related injury since 1978."

Galloway is adamant that the RWR method can help anyone run while reducing or eliminating running-related injuries but also relieve stress while improving mental acuity. He states that by focusing on the intervals, a person assumes cognitive control over their workout, allowing them to better control fatigue and avoid negative or detrimental thoughts that can derail training.

I'd have to concur. I've been using RWR for nearly a year and had no injuries — and my joints are on the older side. On a few hill-training days when my knees started to act up, I shortened the intervals to 0:15/0:15 and avoided pain and injury. I actually look forward to run days, and I'm no longer as exhausted (physically or mentally) at the end of distance runs.

My blood sugar levels are under control and I'm off my doctor's prediabetic radar. And I'm losing weight — about eight pounds so far — which has stayed off. I've completed two half-marathons this year, with one more scheduled wherein I hope to break that three-hour time.

A simple approach with amazing results is worth a shot, right? I know it's cliché, but if I can do it, anyone can do it. 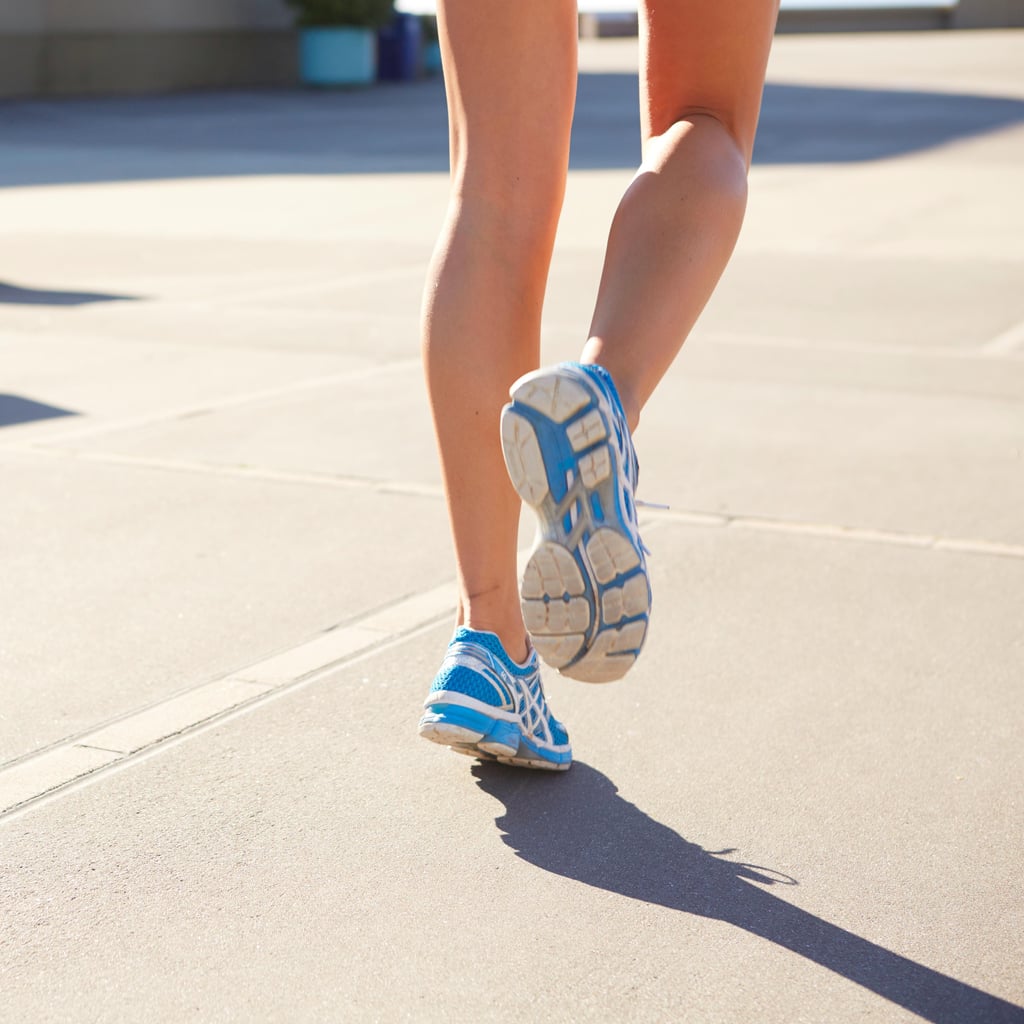 20-Minute Workouts
Want to Burn Calories With No Impact? This 20-Minute Sliders Workout Is the HIIT You Need
by Maggie Ryan 6 days ago

cardio strength workouts
Get Sweaty, Strong, and Shredded With This 30-Minute Cardio and Abs Ladder Workout
by Jenny Sugar 6 days ago