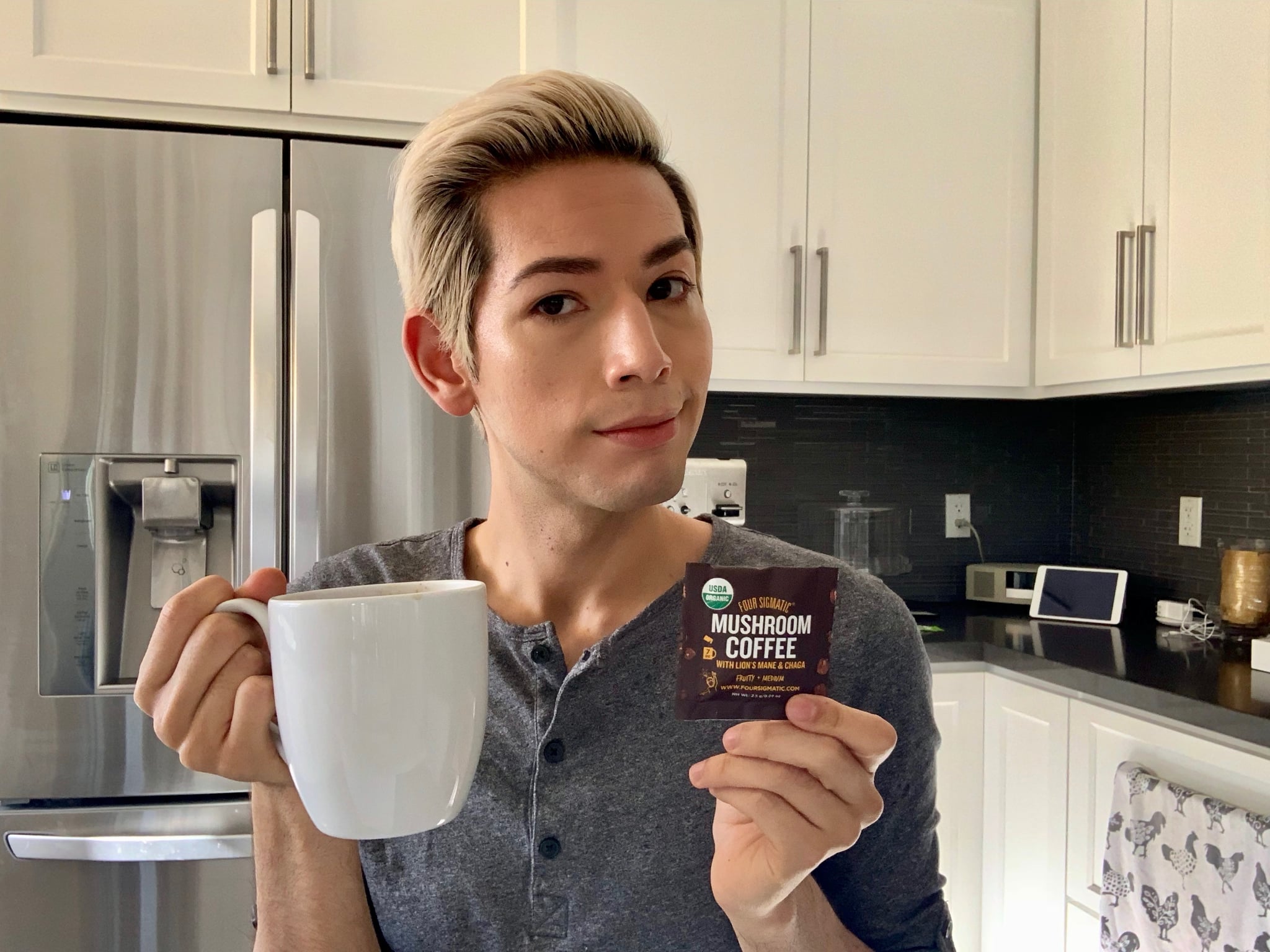 First we added nut milk, then we added butter, and now the world may have just gone mad with the addition of mushroom coffee. I'll be the first to admit that it sounds gross — but let me explain why I decided to try it.

The mushrooms in question are actually a new kind of "magic" mushrooms, called adaptogens. They come with a range of benefits, from increased focus to reduced anxiety, and can even contain anti-ageing benefits. With the rise in popularity of these adaptogenic herbs and mushrooms, comes the rise in all sorts of fun, new, Instagram-worthy beverages, just like the mushroom coffee.

Now, when you think of mushroom coffee, you may think of these little veggies floating around in a hot cup of joe, but that's not what this is. It's actually a finely ground blend that's packaged into little pouches you mix with hot water. It's basically instant coffee with some (nearly tasteless) mood-enhancing adaptogens that pack an extra punch. 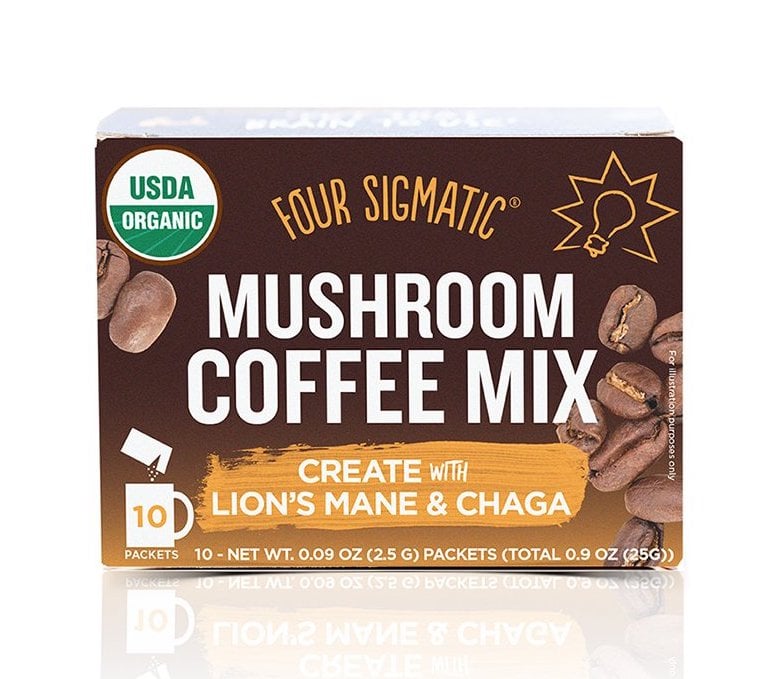 I tried two blends over the course of the week to truly put this trend to the test: Four Sigmatic Cordyceps Mushroom Elixir Mix ($38 for 20 packs), which I mixed into my regular brew, and Four Sigmatic Mushroom Coffee Mix ($15 for 10 packs), which I tried in just plain hot water. My initial reaction to trying the mushroom coffee was that it did have a slightly soup-y flavour to it. (After all, mushrooms are still mushrooms.) It was a little more earthy and savory than one might expect, but it's very subtle. Think of it as a standard cup of black coffee with a tablespoon of vegetable broth. It's not wildly noticeable, but it is different.

The first couple days I drank the Cordyceps Mushroom Elixir in my regularly home-brewed coffee. It's the company's revive blend containing a mix of cordyceps extract, field mint extract, rose hips extract, and schisandra extract. Cordyceps is a medicinal mushroom that is great for athletic performers and contains anti-ageing properties. While I still felt forever-21 (as I normally do after my morning coffee), I did have a little extra pep in my step and felt a little more alert than usual throughout the day. Subtle, but still noticeable.

I also tried a second round in the afternoons, minus the coffee, to see if it stood the test. While it didn't pack the same punch, I did feel a little boost in my energy. On a scale of one to 10, I would say it ranked about a two, whereas a regular cup of coffee would rank about an eight. But that's understandable considering the lack of caffeine and the time it takes for your body to adapt to the change.

For the second half of the week, I tried the Mushroom Coffee Mix, which is a blend of instant coffee powder with lion's mane extract, chaga extract, and rhodiola extract. All three of these are thought to improve cognitive function. And in my view, they did! This blend was my favourite of the two, mainly because it contained actual coffee. I felt ready to tackle the day. In fact, I was amped enough to go for a run and still had enough energy to do some creative brainstorming. It was a very nice surge of mental alertness. The taste wasn't as bitter, either. It had a fruitier finish, which was nicer on the palette. It's definitely an upgraded cup of coffee!

Mushroom coffee definitely has an earthier flavour than anything you'll find at your local coffee shop, but the adaptogens certainly give it an edge. And in the case of the products I tried, even the price is fair, which isn't always the standard when it comes to fancy adaptogen blends. The coffee mix comes out to only $1.50 per cup, and the elixir is just a tiny bit pricier. Since I'm a true coffee person, I probably won't be opting for the elixir alone, but adding mushrooms to coffee? I'm officially sold.

Related:
I Replaced My Morning Coffee With a Ginger Shot Years Ago, and It Seriously Changed My Life
Image Source: POPSUGAR Photography / Zack Peter 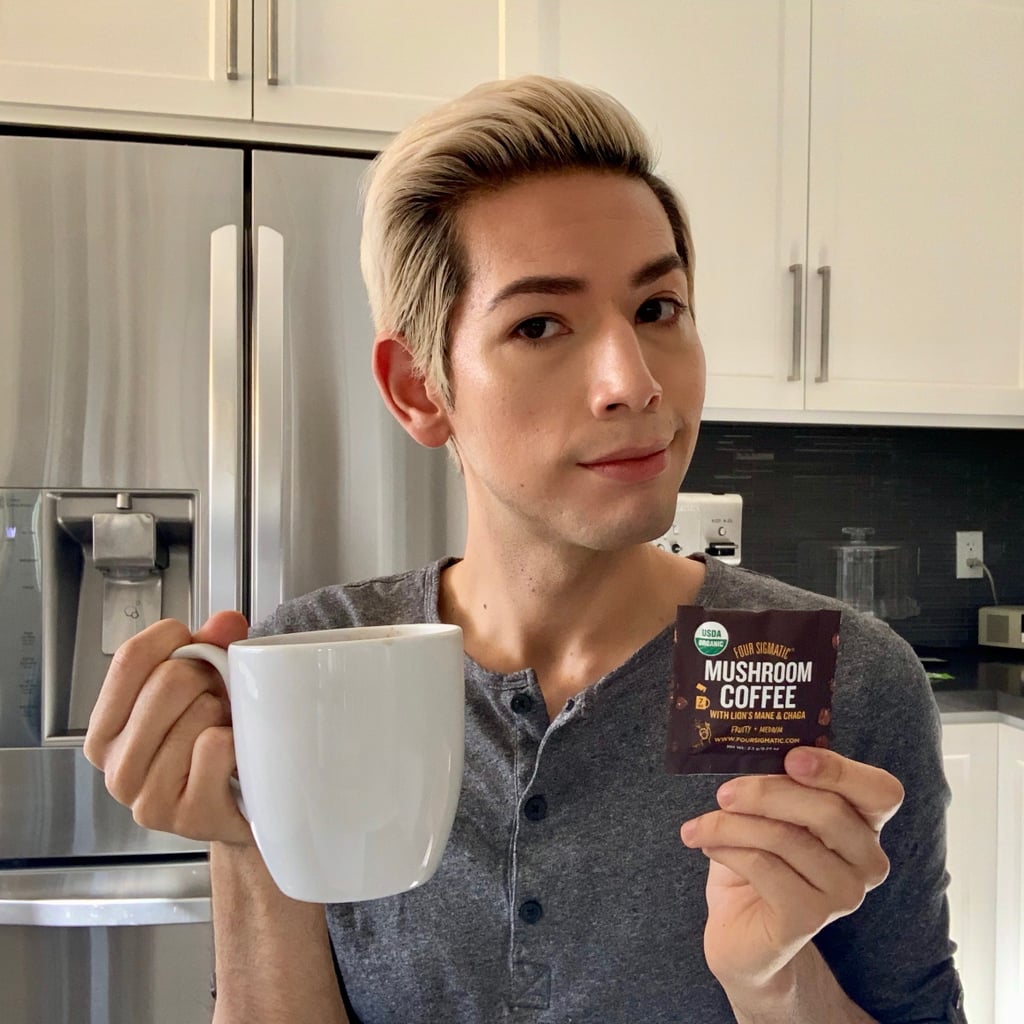 Skin Care
I Tried the Kiehl's Rare Earth Deep Pore Daily Cleanser, and My Sensitive Skin Is Glowing
by Angelica Wilson 14 hours ago

Makeup
I Tried the Viral "Eyebrow Mapping" Hack From TikTok, and I Have Thoughts
by Jessica Harrington 1 day ago