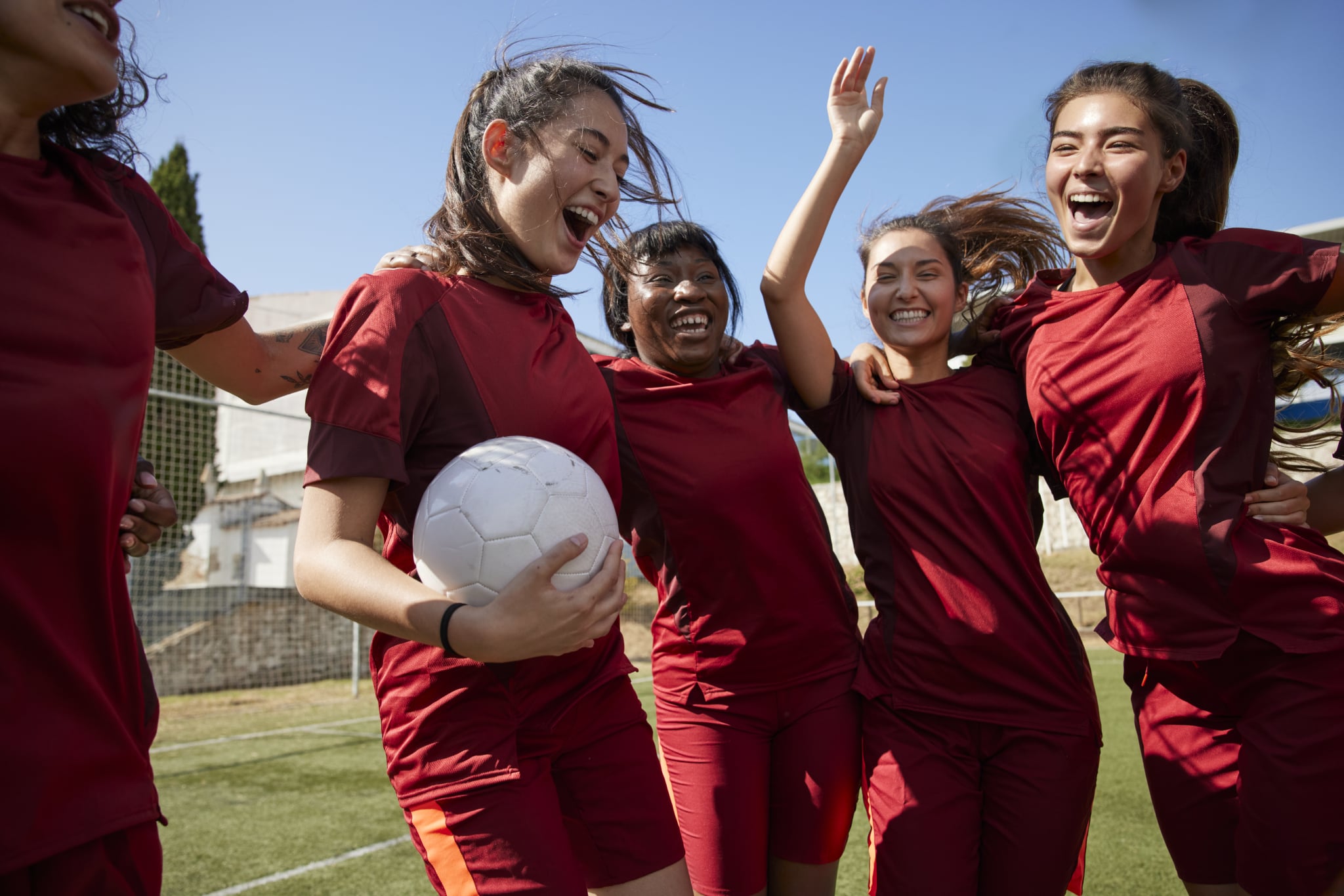 ADHD is incredibly common among elite athletes, and yet for the majority of sufferers, ADHD makes it doubly hard to perform.

I was 37 when it was first suggested to me that I might have ADHD, so I obviously went straight to Google to see what kind of company I was in. I landed on an article about how common ADHD is in elite athletes — Simone Biles, Michael Phelps, Nicola Adams, gymnast Louis Smith, and Shaquille O'Neal are all in the club — and thought that, perhaps, everyone had been wrong about my diagnosis after all. I am not sporty. I hadn't even owned a pair of running shoes until I was 30, and the sweats I wore in 1995 were really just for show.

The first incident I'd blame for my lack of interest in any kind of movement was a ballet class I took when I was 4. Just that afternoon, I had touched a burning hot lawn mower because my mom had told me not to, so my hands were wrapped in cellophane as my fingerprints slowly melted off. I couldn't hold hands with the other children in the class, and without the familiar push-and-pull of their movements, I had no idea where I should be in the routine we'd practised for nearly a year. The teacher shook her head, told me to L-I-S-T-E-N. I was filled with shame and didn't go back after that.

"It was during my assessment for ADHD that I realised for the first time it might be something else making me hate my uncooperative body."

At school, I often began a new sport with some confidence, but dropped it within two sessions, either bored or beat. I was sent from the pitcher's mound to the tennis court as teacher after teacher tried to find that one sport I could play properly, where I wouldn't fall over, forget the rules, or slow everyone else to a grinding halt. I thought I'd found it when they offered us a semester of Vogueing — it was the closest I felt to happy in those scratchy mesh T-shirts — but when it was time to be graded on the set routine for class, the assessment was that while I had the personality for it (you bet your ass I did), I lacked the coordination, and I got a C. Within a few months, I knew how to fake a sprained ankle and a "heavy flow", and that was that.

I've blamed my poor self-esteem and total lack of trust I had in my body for the lifelong avoidance of exercise that followed. I was too weak and erratic. Not lazy, because ironically my default pace is "run", whether that's from the bus to work when I'm already an hour early, or just navigating the supermarket aisles. But inadequate. It was during my assessment for ADHD that I realised for the first time it might be something else making me hate my uncooperative body.

"In order to engage with most sports and forms of exercise, you have to keep to a routine and follow instructions," explained consultant psychiatrist Mohamed Abdelghani, MBBCh, FRCPsych, MSc, of Dyad Medical in London. "You have to put the work in to see a gradual improvement in your performance — it's not often about immediate results. You might have to commit to early starts and a monotonous, repetitive practice. You may have to take turns if it's a team sport. All of this can be incredibly difficult for someone with ADHD, who is likely to be more clumsy, more fidgety, restless, impulsive, and struggle with both following instructions and time-keeping."

Check, check, and check. Spending tons of money on head-to-toe Sweaty Betty outfits and a new yoga mat, only to quit three classes in? Yep. Getting hyper focussed on goal-setting and a prework swim routine only to realise schlepping up and down a pool is f*cking dull? Same. I realise now this means I've never given myself the time to improve at anything. But this boredom also has a very real physical fallout in a body with ADHD: with the slump in dopamine comes a huge energy crash, to the point where I'd get dizzy and have to sit out.

"We see this 'boom and bust' a lot in ADHD — the energy levels aren't well regulated," said Dr. Abdelghani, "It's hard to anticipate when you'll experience fatigue, so you'll be put off committing to regular classes, especially when you're juggling other demands at home and at work. Some days, you won't be able to perform."

There's also evidence to suggest that while boys, men, and AMAB (assigned male at birth) folks are just as likely to be affected, certain gender norms mean that girls are simply less likely to participate in organised sports from an early age. "Girls receive less social support to take part in sports, they may have the perception that they enjoy sports less than boys, and then puberty can also play a part in making girls more reluctant, whether because of concerns about their body shape or image, or adjusting to the changes they're going through," says author of Understanding ADHD in Girls and Women, clinical psychologist Jo Steer, PsychD, BSc.

Then there's the low self-esteem to contend with — girls, women, and AFAB (assigned female at birth) folks with ADHD are far more likely to experience a general lack of self-worth, making class activities an ordeal.

"[Coaches] need to be informed of ADHD, how it impacts on the individual they are coaching, and what reasonable adjustments need to be in place."

"Any negative feedback is going to be detrimental, too," said Dr. Abdelghani, "Depending on the level of emotional dysregulation a person with ADHD has, certain comments will really hit home. It's harder to overcome performance anxiety if there's an element of trauma involved, and so you do your best to avoid it in the future."

But before I resign myself to the sofa for good, poor physical health often goes hand in hand with ADHD, too. Exercise is therefore vital in improving this picture, and can actually help with the symptoms, too, said Dr. Abdelghani: "It's something to do with the excess energy and exertion that can help improve sleep. It can also give you a structure to build your day around." Exercise also increases dopamine in the brain, which helps improve attention and focus in ADHD, as well as endorphins to make us feel good.

Imagine, then, if this pattern of poor performance, criticism, and eventual avoidance could be broken in childhood, so that more of us can hope for a more balanced approach to sport. Dr. Steer thinks the approach of the coach is central to this change: "They need to be informed of ADHD, how it impacts on the individual they are coaching, and what reasonable adjustments need to be in place. For example, perhaps the girl can be set a task to do while waiting, and then there should be time for a quick check in following group instructions to ensure she has heard and is clear on her role. Individual-based sports can be ideal — I've worked with girls who excel at athletics, karate, trampolining, and gymnastics."

Certainly as an adult who's armed with a better understanding of my ADHD symptoms — specifically, my boredom, inattentiveness, fluctuating energy levels, and difficulty following instructions — I know I'm best off with a teacher for a one-to-one session. That dedicated attention keeps me focussed on the job in hand, ensures I'm doing it right, and my instructor knows to keep things varied and not let me try to talk my way out of moving by bringing up Adele's new album. It's too expensive to do forever, but I plan to mix it up with the briefest HIIT videos I can find, swimming when it feels COVID-safe again (channelling my inner Michael Phelps, because you can't really get bored of swimming — you either splash on or drown, right?), and dance. The writer and fellow ADHD-er Natalie Hughes pointed me toward The Fitness Marshall videos on YouTube for something lively and stimulating that doesn't feel like a workout. I've also heard from so many women with ADHD that cycling is great for them, so if Peloton is looking for a neurodivergent ambassador who may or may not quit after week one, I'm here ready and willing in my brand new bike shorts.