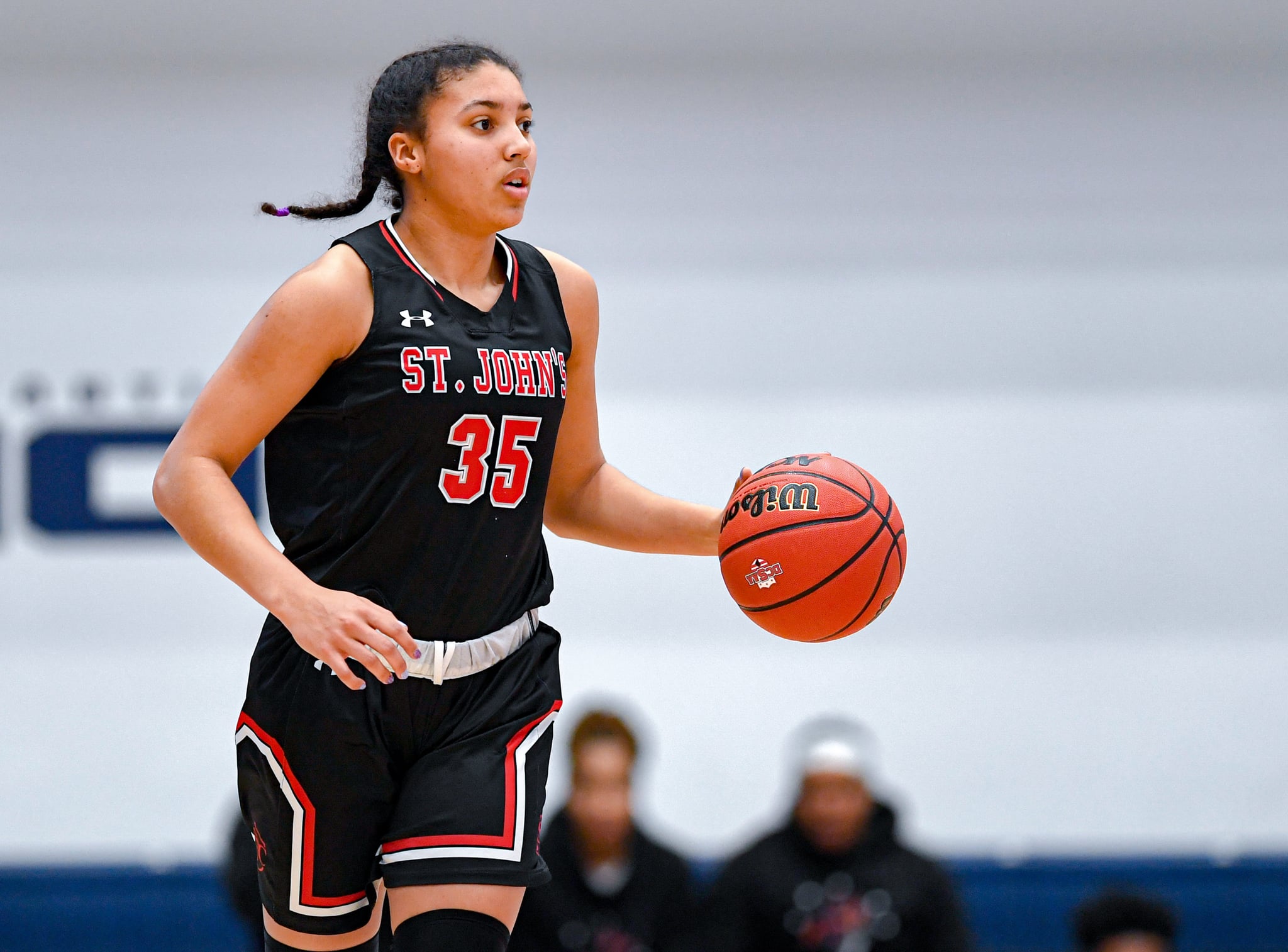 Azzi Fudd is a normal 18-year-old high school senior. She's student body vice president at Washington DC's St. John's College High School, she listens to Drake when she needs a pump-up song (she can't pick just one favourite), and she's in the process of choosing a major for when she becomes a freshman in the fall (she'll probably create her own with some sort of combination of communications, psychology, or marketing). But Fudd isn't just a normal 18-year-old high school senior. In fact, she's extraordinary.

Fudd was the top recruit for women's collegiate basketball in the 2021 class, has impressed the likes of Stephen Curry and schools across the nation, was the first high school sophomore to win Gatorade National Girls Basketball Player of the Year (she averaged 26.3 points per game that season), and is touted as one of the best young talents this sport has seen in quite a while. The guard was just named the Morgan Wootten National Player of the Year, given annually by McDonald's All American Games to the greatest high school basketball players in the country, previously presented to athletes such as Maya Moore and the Seattle Storm's Breanna Stewart. On the men's side, Minnehaha Academy senior Chet Holmgren received the award.

"It's such an honour. I'm super excited about it, and honestly, I take these things as kind of a way to humble myself and motivate myself, just seeing all the past people who've won the award and where they are now and how well they're doing, both at basketball and just in general," Fudd told POPSUGAR via Zoom while holding a small dog fitted in a sweater (no big deal). "And so, I use that like as, 'I need to keep working hard,' so one day I can hopefully follow in their footsteps."

Fudd is committed to the University of Connecticut, but, as outlined in a recent cover story by ESPN, it wasn't an easy decision. She ended up picking UConn because it's not too far from home ("It's not a bad drive," she said, adding that it's "close-ish") and she's confident in the women's basketball program — on its way to a 13th consecutive Final Four on April 2 — and its players. "I know what I'm getting out of it. I know that the coaches are the best, so I'm going to be able to develop and hopefully, potentially, be able to reach my goals, which are play professionally, be an Olympian," she noted. "I'll be able to be pushed by the coaches and the players, day in and day out, at practice."

Fudd will be joining good friend and UConn star guard Paige Bueckers, the very first college freshman to win Women's Player of the Year by The Associated Press (Bueckers led her own recruiting class in 2020). Fudd is looking forward to playing with all of the Huskies, she stated, especially after her senior season was cancelled due to COVID-19. Her team was still able to get in two official games, she said, but continued on to participate in unofficial court matchups after. As the cover story details, their principal gave them the OK to play unofficially.

The incoming UConn freshman actually hurt her foot during one of those official games, she revealed, but she's starting to make her way out of her boot. "I want to make sure that it heals properly and I have no lingering issues before I head up to school," she said. That'll be on June 1, she noted, giving her plenty of time to get to know her new teammates and return to proper training before the season starts.

Related:
For the First Time in History, 2 Black Coaches Will Be in the Women's Final Four

The injury Fudd is getting over now is minor compared to the ACL and MCL tears she experienced at USA Basketball 3-on-3 U18 nationals in 2019. It would be nine months — including knee surgery, rest, and physical therapy — before she even tried to go back on the court for a game. Through it all, her love of basketball never dwindled.

Both of Fudd's parents played collegiate basketball and coached her at one point or another growing up, and her mom was drafted into the WNBA after playing at NC State and Georgetown, though she was cut before her debut season, and a knee injury (of all things) prevented a comeback attempt once Fudd was born. Fudd's parents were always supportive, especially when it came to checking in on her passion for the sport. "On some of our bad days, they would tell me like, 'If you don't love it, if you don't want to play it, just let us know, and we'll back off,'" she recalled. Knowing that basketball was her choice, her commitment, helped Fudd through her arduous recovery.

Though going pro is her dream — she "fell in love" with the whole Washington Mystics team after sitting courtside when they won the WNBA championship title in 2019 — Fudd is ready for the next chapter in her career: college ball. And she'll be suited up in a jersey with the number 35, the same number her mom donned all those years prior as an athlete. See? Extraordinary.