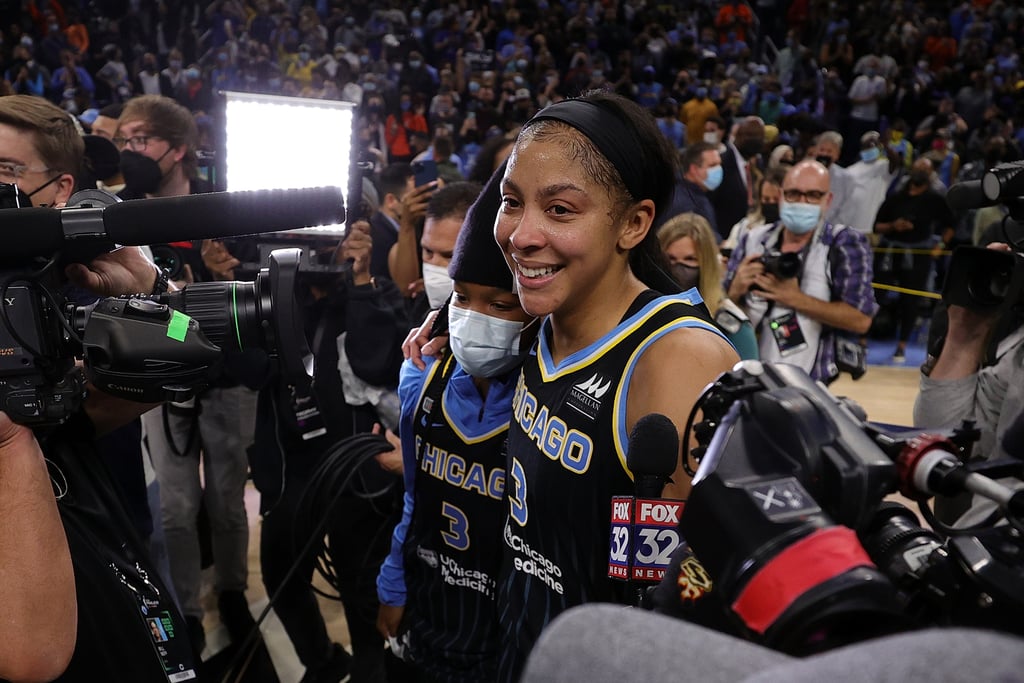 Candace Parker won her second WNBA title on Oct. 17 with Chicago Sky's 80-74 Game 4 victory over Phoenix Mercury. Parker grew up in the Chicago suburb of Naperville, and in her first year with Chicago Sky, she was able to help them earn their first-ever WNBA Championship trophy. Back in February, when she signed a two-year deal with Chicago Sky, she said that "going home has given me a sense of peace," and to play professionally in the very place she started basketball makes life come "full circle."

Seen ahead, Parker, a two-time Olympic gold medalist and two-time WNBA MVP, embraced her 12-year-old daughter Lailaa amid 2021 WNBA Finals celebrations. It's an emotional moment, and one they had shared previously in 2016 when the Los Angeles Sparks, her longtime team, claimed the title against the Minnesota Lynx. "I have a picture of Lailaa in Minnesota when we first won, and it was in similar fashion . . . and she's like yelling, 'Mom, we did it!'" Parker said in a press conference after the Game 4 match on Oct. 17. Seeing Lailaa exclaim the same phrase to her this time around was surreal, she stated.

"She sacrifices her mom so that I can live my dream."

Parker noted that it's been hard being away from her daughter due to basketball this season. When she asked Lailaa if it was OK that she came to play for Chicago Sky, Lailaa told Parker she wanted a picture like the one they took in 2016. And another winning photo op is what they got!

"She's grown up. I owe everything I am to her just because she's been my motivation and my reason for everything," Parker said. "She sacrifices her mom so that I can live my dream. . . . I just am so over the moon about how amazing she's grown up to be."

Watch Parker's heart-warming celebration with her daughter ahead, plus a tear-filled on-court interview from Parker with ESPN's Holly Rowe. Congrats are in store!

Related:
Just a Reminder: the WNBA Has Been Leading the Social Justice Charge For Years
Previous Next Start Slideshow
WNBABasketballAthletesSports