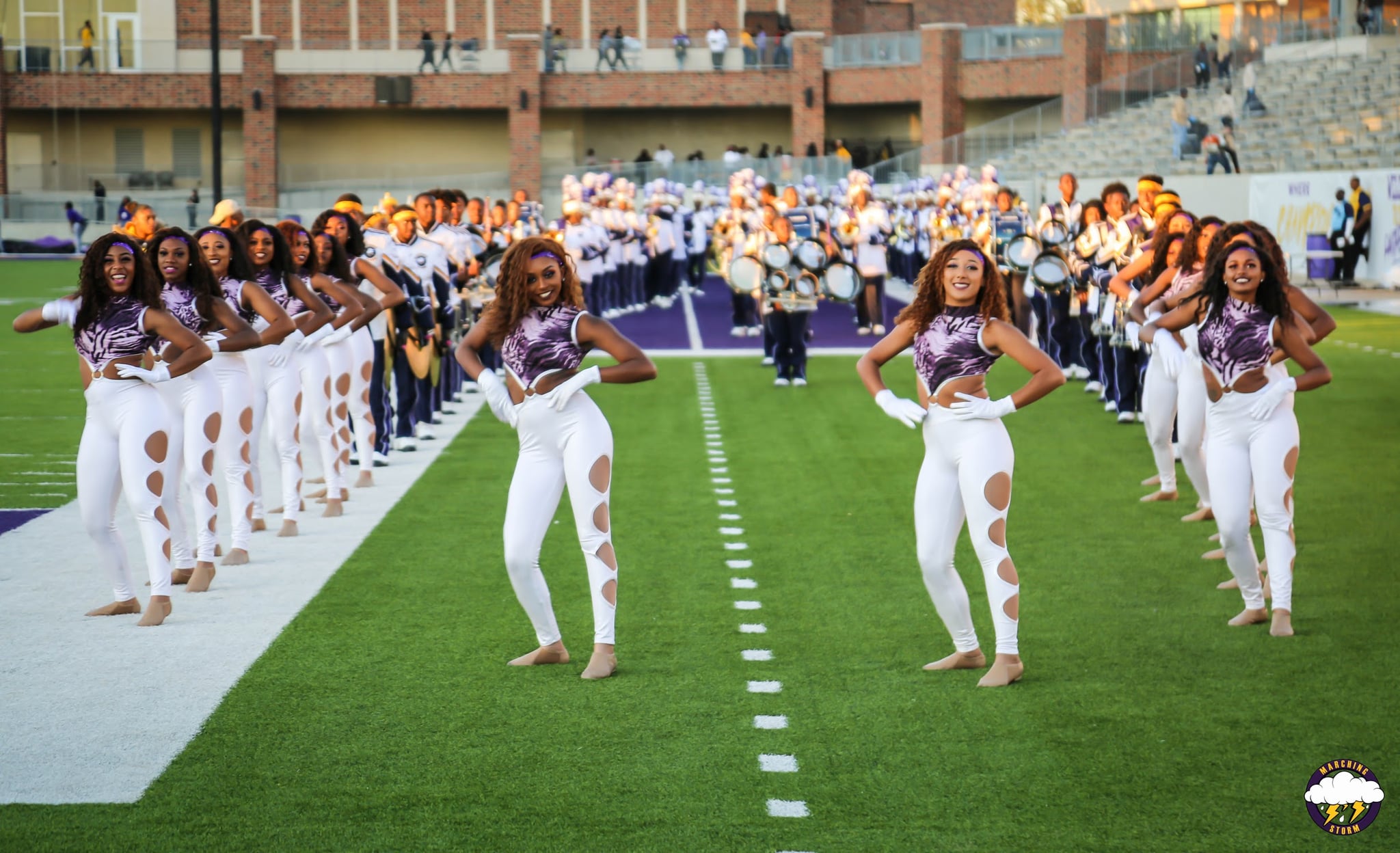 It starts with an eight-count, but dancelines at historically Black colleges and universities are more than just their flashy performances and infectious energy. They are, in many cases, the face of their school. Their choreographed stands — routines done entirely in the bleachers — and hard-hitting presence on the field, personify marching band music. They are a force. Furthermore, they are a sisterhood.

Shawn Zachery, director of the Prairie View A&M University Black Foxes since 2013, was on an HBCU dance team in the 1980s, specifically the Southern University Dancing Dolls. She told POPSUGAR that the majorette style of HBCU dance — which started out as baton twirling — originated in Mississippi in the '60s, naming notable schools like Alcorn State University and Jackson State University as pioneers (the Dancing Dolls were established in '69, Alcorn's Golden Girls in '68, and JSU's Prancing J-Settes between 1970 and 1971). Shirley Middleton, a former member of the Prancing Jaycettes at JSU, before they became known as the Prancing J-Settes, is said to have made the call for majorettes to drop their batons.

Still, Zachery said teams existing before 2000, including her own in the '80s, aligned with a drill-type of performance. "They did a lot of arm movements and very simple things like kicks. You weren't going to see pirouettes and à la secondes," she noted. Many teams have now morphed into a style that is more technique-based. BuzzFeed contributor Frederick McKindra classifies the HBCU majorette style overall as "hip-hop majoretting". But Z'Nae Mangum, captain of the PVAMU Black Foxes, still describes two distinct categories of movement you'll see from HBCU dancelines even now: "really smooth" and "really hard." (BuzzFeed's McKindra defines this as fluidity versus movements like bucking.)

HBCU dancelines have developed a great deal over the years. "And now what you're seeing, in mainstream, is people using the HBCU genre or style of dance," Zachery said. "The interesting thing is that we have borrowed from professional dancers, and professional dancers are now borrowing from us." (Think: Beyoncé's 2018 Coachella performance.) She explained, "You're starting to see this cross-pollination of the different styles. And so you will see hip-hop, you will see jazz, you'll see modern, you'll see all different influences into what is combined and called the HBCU style.

But it's not just about dancing at sports games and other school functions. The PVAMU Black Foxes have also performed as part of the school's Marching Storm at a Formula 1 opening, the Houston Rodeo, and even the 2017 Macy's Thanksgiving Day Parade. The Howard University Bisonettes had the honour of doing halftime with the Wizards Dancers last year.

HU Bisonettes captain Piaja Brooks, 21, a senior at Howard University, told POPSUGAR that the Bisonettes' versatility attracted her as a dancer of almost 15 years. She said they're on the basketball court one day doing jazz numbers to Janet Jackson; then, "we're doing a contemporary number for breast cancer awareness, and the next day we're doing a hip-hop number." And that goes for stands too: "We can throw anything out at any given time."

Brooks explained that the audition process this year went virtual due to the COVID-19 pandemic. Nonetheless, members had to showcase three dance pieces: jazz, hip-hop, and technique. "So it's like you have to check off three for three initially right off the gate," she said, adding that the group considers themselves to be a pre-professional team. 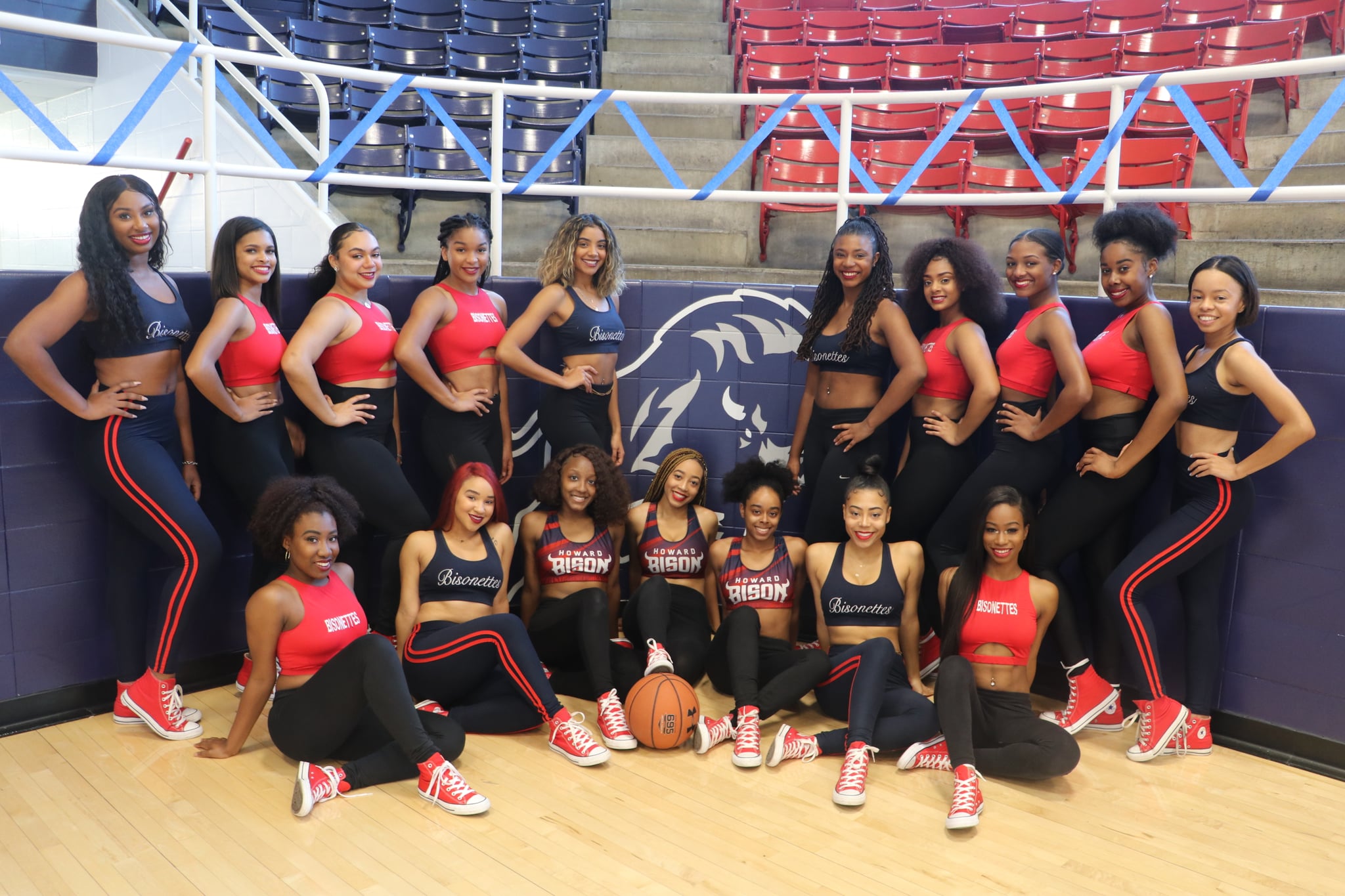 What attracted Mangum, also 21 and a senior, to the PVAMU Black Foxes was the sense of being welcomed home. She told POPSUGAR she's been dancing since she could move her feet, and she classified their style as "groovy" and "saucy," being able to blend the smooth and hard elements of HBCU dance. She added that when they perform and "make up stands," they try to tell a unique story. "That's what really makes us stand out, that we're always reaching for something new, trying something different," she said. This push for creativity, too, Shawn explained, comes from social media, where fans constantly press the group — and other HBCU teams — to figure out what's next.

"Being able to be a part of such greatness and Blackness is just amazing."

Both Brooks and Mangum talked about their teams with an assured sense of belonging. "Being able to be a part of such greatness and Blackness is just amazing," Mangum said. Brooks lit up when discussing the electric atmosphere that the Bisonettes create on stage or in the stands: "We're a team of Black dancers performing in front of a predominantly Black school. We're doing these songs that everybody knows. We're giving you the viral dances you want to see. We're giving you the technique. We're giving you the face, the attitude. We're giving you the full package. That's why it's so easy for the crowds to just jump in and live in that moment with us, because we're inviting them in while we're dancing."

Brooks noted, "We emulate Black joy by coming together, being a melting pot of Black women from various places around the country with our various dance backgrounds, collaborating on choreography, and dancing to songs that we feel emulate our Black joy or our Blackness that our peers will resonate with. Having that comfortability amongst our peers and even our staff to just go out and do what we feel is unapologetically us . . . there are no words to describe that."

Brooks and Mangum encourage Black girls and women to join HBCU dancelines and dance teams whether or not they aspire to be at Howard University or PVAMU. Mangum said it takes passion, attentiveness, and selflessness to truly commit to a group all the while stepping into your own authentic self. At the end of the day, when the stadium lights dim and the dancers revel in their post-performance glow, they are a family.

It's the same for the HU Bisonettes. Prior to any performance, the team will go through their dance behind closed doors. They lock arms and recite what Brooks calls their "sister prayer," explaining that it unites them together. "We say, 'We are a family. You are my sisters. I admire your strengths and understand your weaknesses.' We finish the entire chant, and then we're just ready to go out," she shared. "It's like tunnel vision."

Black Joy
Can We Get a "Hell Yes" For All the TV Shows and Movies With Black Hair and Makeup Teams?
by Natasha Marsh 2 weeks ago