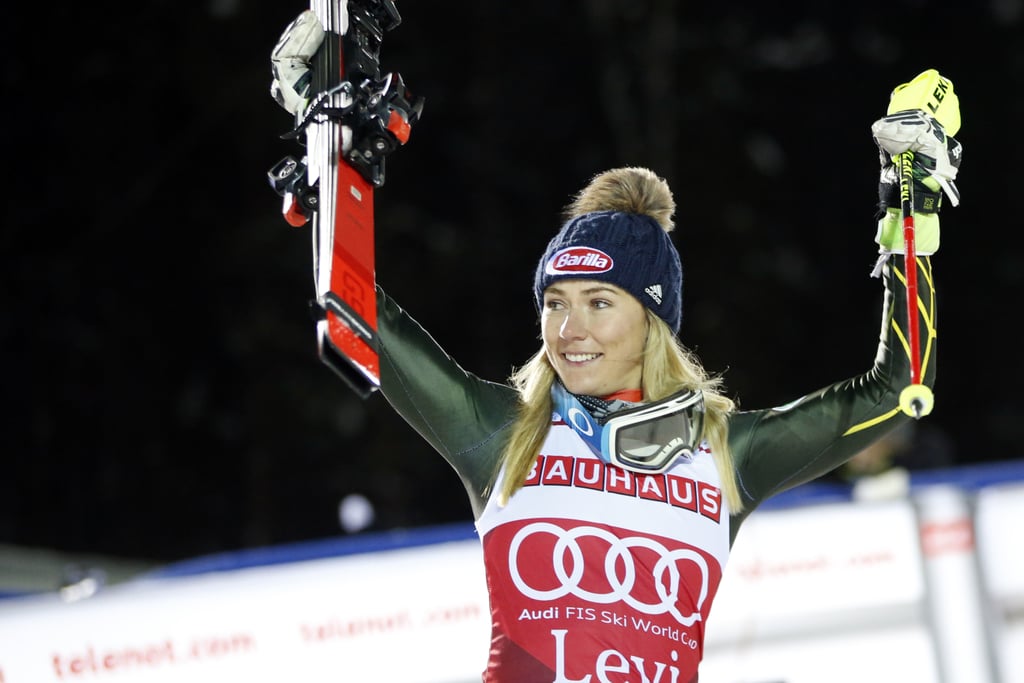 Mikaela Shiffrin Breaks the Record For Most World Cup Slalom Wins — and Gets a Reindeer!

On Nov. 23, at the Levi, Finland, 2019-2020 FIS Alpine Ski World Cup event, two-time Olympic gold medalist Mikaela Shiffrin clinched the title of skier with the most career World Cup slalom wins in history. The great Ingemar Stenmark from Sweden held that record for over three decades, with 40 titles, until Mikaela's 41st world cup slalom victory. This was her first win of the season — and a monumental one at that. Slovakia's Petra Vlhova crashed on her second run after leading the competition. Switzerland's Wendy Holdener ultimately finished second behind Mikaela, and Austria's Katharina Truppe finished third.

Mikaela, 24, claimed the women's record for World Cup slalom wins back in December 2018 when she surpassed Marlies Raich's total of 35. Earlier this year, Mikaela became the first person to earn 15 World Cup wins across disciplines in a single season, breaking the record of 14. Then, she finished out the 2018-2019 season with two more victories.

In Levi, Mikaela also won a reindeer — World Cup champions there are traditionally gifted reindeer, which are reportedly kept in Finland year-round. Fittingly, she named it Ingemar. "I was thinking about this name yesterday after the race when someone mentioned the record, but there were a couple things to sort through before announcing it," Mikaela wrote on Instagram the day after her victory. "First was to ask for Ingemar's permission of course! But I also wanted to take a quiet moment to think about the day and what this race meant to me. The truth is, it did not feel like a record-breaking day for me. It felt like a day. A race day. A wonderful slalom race day, albeit a little foggy."

She continued, "And now I have this record to my name — a milestone that I never in my wildest dreams thought I would achieve when I was younger — but all I could think was, Ingemar was better. I don't see it as 'breaking his record,' I am just continuing it. So even though the idea of naming my reindeer after Ingemar was born from the talk of 'breaking' the record, in the end that is not why I chose to do it. It is simply a tribute to one of absolute greatest ski racers to ever live."

Mikaela's three other Levi-won reindeer are named Rudolph, Sven, and Mr. Gru, according to NBC Sports. Ahead, check out footage from her record-breaking slalom performance as well as photos of her fourth reindeer friend. It doesn't fly or pull any sleighs (that we know of), but it does belong to a history-maker who still has an entire season ahead of her. And that's pretty epic!

Related:
"I Laid It All on the Line": Lindsey Vonn Wins Bronze in the Final Race of Her Career
Previous Next Start Slideshow
UnstoppableSkiingAthletesWorkouts