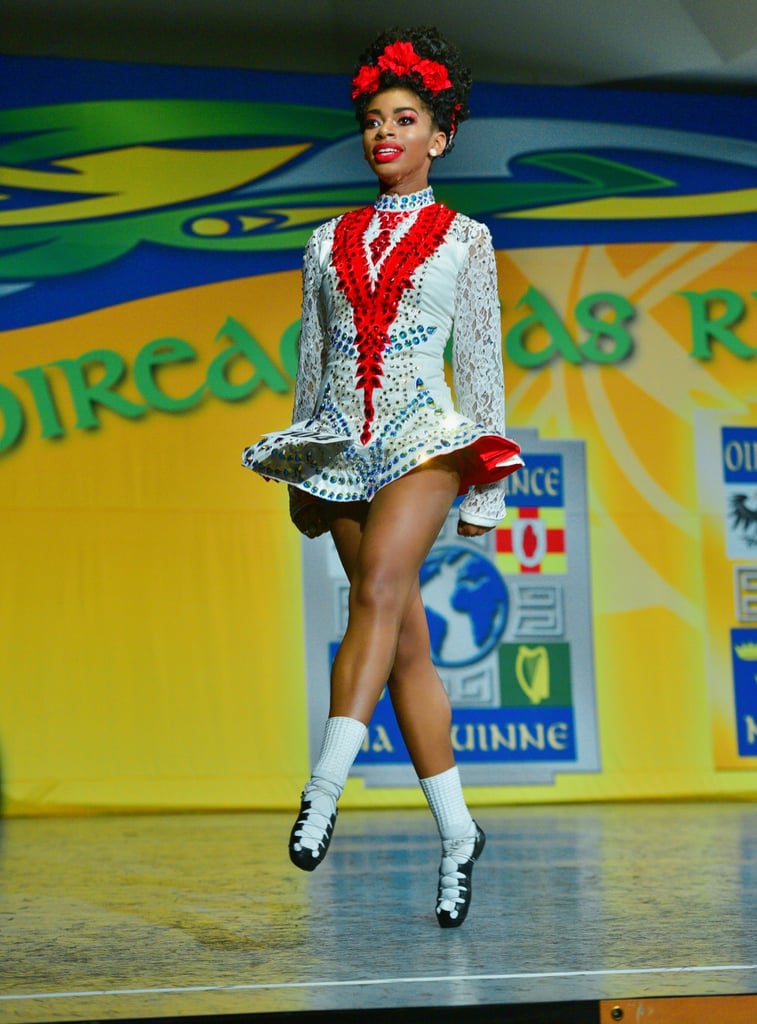 Morgan Bullock first started taking dance classes when she was 3 years old and fell in love with Irish dance when she was 10. Now, at 21, she's recognised as one of the top 50 dancers at the World Irish Dance Championships. She's been invited by the Prime Minister of Ireland to perform at their annual St. Patrick's Day celebration, and was even offered a spot on the Riverdance theatrical show world tour. Oh, and she also makes badass TikTok videos.

Beyond the world of competitive dance, Bullock first gained internet fame in 2020 when she posted a video of herself doing traditional Irish steps to Megan Thee Stallion's "Savage." "I just started choreographing and I made a quick video," she told POPSUGAR. "I almost didn't post it because I was just like, 'I could do better than this.'" The video has since gained over 1.3 million views and several TikTok users have attempted to recreate Bullock's moves, even tagging her in their videos. "It's really cool to see other people doing my choreography," she said. "Hopefully, with more people seeing Irish dance, more people will be interested in it and try it out."

I feel really fortunate to have the opportunity to inspire other people who look like me to try Irish dancing."

Bullock, who's a student at the Baffa Academy of Irish Dance, remembers seeing Irish dance for the first time at a recital when she was 10. "It was like nothing I'd ever seen before, and I immediately asked my mom if I could sign up for classes," she said. Bullock says her mom was initially hesitant to let her take classes because she would be the only Black student, but she remained persistent and quickly developed a passion for the dance. "I had been doing other kinds of dance, and it was just really crazy to me that the dancers were doing all these intricate moves with their feet and their upper body was completely still . . . I was like, 'How is that possible?'" she said.

During regional competitions, or Oireachtas, Bullock and her team dress up in traditionally bright, embellished costumes and wear pageant-worthy wigs covered in bouncy curls to compete by age group for a spot at the world championships. Bullock, who sometimes trains up to 18 hours per week, compares the sport to gymnastics in that dancers are graded based on team performances and individual performances, which are her specialty. Over the years, she has qualified to travel to Glasgow, Scotland, and different parts of Ireland, where she hopes to perform again once shelter-in-place orders are lifted.

In the past, Bullock has faced criticism from people accusing her of cultural appropriation, but she has made it clear that there's a difference between appropriation and appreciation. In fact, one of her proudest accomplishments has been inspiring other young Black girls to take up Irish dance, making the sport more diverse. "There are Irish dance schools all over the world, on every continent, and Irish dance is something that anyone who wants to do it can train and do it," she said. "I am one of few, but there are other Black Irish dancers who I know or know of, and every year I see that growing more and more, and I just see more Irish dancers who don't really fit the typical mould of Irish dancers . . . Irish dancing is getting more and more diverse, and I feel really fortunate to have the opportunity to inspire other people who look like me to try Irish dancing."

Most recently, Bullock performed in an online festival celebrating St. Brigid's Day, a Gaelic festival that marks the beginning of spring, and she looks forward to starting rehearsals for Riverdance. Check out Bullock's dances to "Toosie Slide" by Drake, "Candy Shop" by Pop Smoke, and more here.

Related:
I Lived in Ireland For 2.5 Years, and These Are the Places I Tell Everyone to Go When Visiting
Previous Next Start Slideshow
TikTokDance