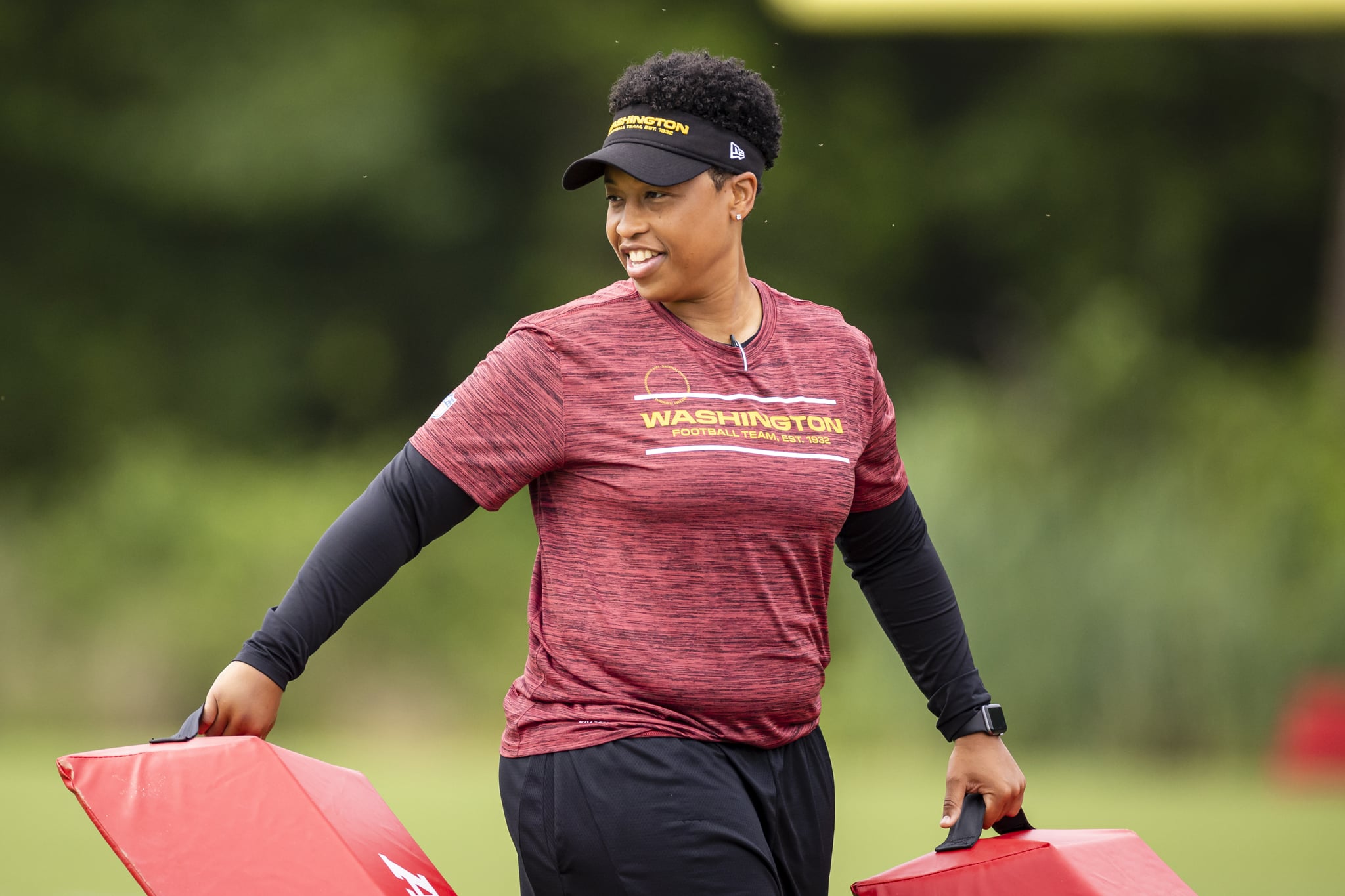 The 2021-2022 NFL season kicks off Sept. 9 with a record 12 women holding coaching roles in some capacity. This comes after a number of women made history during the last two seasons: Katie Sowers became the first woman to coach at the Super Bowl in 2020 when she was an offencive assistant coach for the San Francisco 49ers. That appearance also made her the first openly LGBTQ+ coach in Super Bowl history. Cleveland Browns' Chief of Staff Callie Brownson and Jennifer King, a full-year Washington Football Team coaching intern at the time, took part in a historic game that fall when they were on opposing sidelines with another woman, Sarah Thomas, who officiated. The following month, Brownson was the first woman to hold a position-coaching role during a regular-season game. Then, in 2021, Maral Javadifar and Lori Locust were written in the record books as the first women on an NFL coaching staff to win the Super Bowl, and Thomas went on to become the first woman to officiate a Super Bowl. So, yes, it was a lot of firsts.

According to a list provided by an NFL representative, six women so far hold full-time positions for the upcoming NFL season: King is now an assistant running backs coach for Washington; Brownson returns as Cleveland's chief of staff after a suspension from the team for operating a vehicle impaired; Locust and Javadifar return as the assistant defencive line coach and assistant strength and conditioning coach, respectively, for the Tampa Bay Buccaneers; Emily Zaler returns as the Denver Broncos' player performance assistant coach; and Sophia Lewin joins the Buffalo Bills as an offencive assistant coach.

Related:
Super Bowl Ref Sarah Thomas Is the Latest in a String of Women Breaking Barriers in Pro Sports

Six others were part of the Bill Walsh Diversity Coaching Fellowship: Sowers with the Kansas City Chiefs, Jada Gipson and Alex Hanna with Cleveland, Tessa Grossman with the Cincinnati Bengals as well as the Atlanta Falcons, Heather Marini with Tampa Bay, and Angellica Grayson with Washington. These fellows usually work with teams through the summer's preseason training, but there's a potential to be hired afterward (as of this article's publishing, there are no such hiring updates).

Out of the 12 total women, six are women of colour, the NFL reports. Last year, there were eight women coaching during the regular NFL season; the total women in positions for the season's entirety was slightly higher than this year, according to a list sent by the NFL, though the fellows were virtual, so they weren't actually coaching on-field.

"Now, when you look at the landscape of the NFL this season, we have 12 female coaches and over 12 female scouts," Sam Rapoport, the NFL's senior director of diversity, equity, and inclusion, told CNBC Make It. "We have two female officials and we have female presidents. We have females at almost every level, except for that top head coach and GM spot, which will come soon." Rapoport acknowledged that more needs to be done to diversify the coaching staff across every team in the league.

Growth of women participation in the NFL on levels from office jobs to coaching roles is accredited to the NFL's annual Women's Careers in Football Forum, which aims to educate 40 women who have typically worked on the high school or collegiate football level about opportunities in the league. As of now, 50 percent of that number are required to be women of colour, Rapoport said. Venessa Hutchinson, senior manager of football programming at the NFL, added, "We want the women to get in a room with people who are decision makers and let them introduce themselves and just have access to folks they wouldn't necessarily have access to."