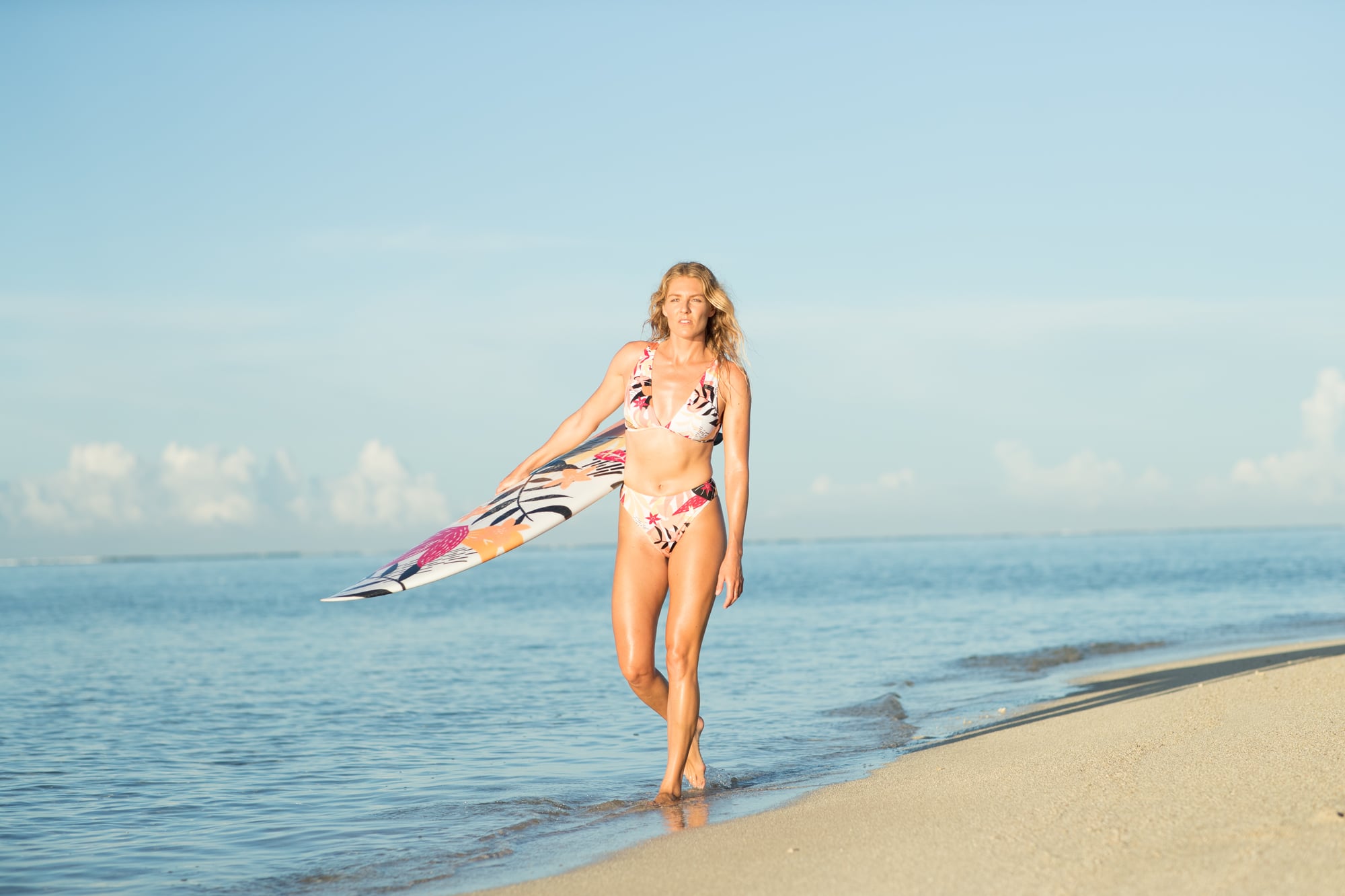 It seemed as though Stephanie Gilmore was untouchable. She was the first person to win a world title in a rookie season (2007), and went on to collect three more titles consecutively. But, there was a period of time when the momentum came to a halt after an assault in 2010 that caused her to, as she put it, lose touch with the ocean. Now, the 32-year-old is one of two women on Team Australia provisionally qualified for Tokyo 2020 — all she has to do is show up to the World Surfing Games in El Salvador this Spring to officially claim her ticket — and, with seven titles total under her belt, she has her eye on Olympic gold next.

Stephanie told POPSUGAR during a preview of Roxy's upcoming eco-friendly Pop Surf collection out April 16, of which she is the face, that she was around 11 when she fell in love with surfing. Her father would take her and her sisters to the beach with him when he wanted to catch some waves of his own. Stephanie, who described the sport as her "first true love," began competing a year later and grew to enjoy the challenge of it all. The ocean is constantly changing, so you have to work with it as your teammate in order to perform well, she explained. "It's a really good metaphor for everything in life. You just kind of let go of things and have to be open to what the changes will be and adapt to it." The ocean can be rough, she said, but it's also where she effortlessly finds her peace of mind.

Reconnecting With the Waves

Stephanie's four-year winning streak was interrupted by an event she couldn't have seen coming: an assault in her neighbourhood. A man attacked the pro surfer with a metal bar in December 2010, shortly after she clinched that fourth world title, slicing open her head and fracturing her left wrist. The recovery, she said, was more mental than physical — she was out of the water for two months tops, but the lingering trauma had taken a toll. The most difficult part emotionally for her, she noted, was coming to terms with the fact that this had happened in a place where she had always felt safe. It had happened at home.

From the time she was little up until the assault, surfing was like breathing to Stephanie. But then, she said, she lost that ease, which is something she details in her documentary, Stephanie in the Water. The crucial part of her recovery was learning to reconnect with the waves. "It was just sort of going back out there and repeating the same motions and accepting that what had happened was in the past and letting go of it and sort of being like, 'Well, I can't control what happened, but I can control how I want to feel about moving forward.'" It took her almost a year to fully reclaim her confidence, she said.

Stephanie finished third on tour in 2011 — she lost to the now-Olympic-bound and four-time world champion Carissa Moore of the US — but then proceeded to claim the prize in 2012. This, she said, was the sweetest victory of her career. It wasn't until after the assault when she "had that mountain to climb" that she really understood what it meant to fight. It also, she said, shifted her perspective on life. "To win in 2012 after having to overcome something quite traumatic and just find my feet again and trust myself again . . . that was the hardest and I would say most rewarding [win], for sure."

Stephanie now leads the pack for most women's world titles alongside Australian legend and former pro surfer Layne Beachley, who also racked up seven victories during her career. Aside from Stephanie's four straight wins from 2007 to 2010 and her comeback title in 2012, she also won in 2014 and 2018. The record in both male and female surfing divisions is held by American Kelly Slater, who has 11 total.

Looking Ahead to Tokyo and Beyond

Eight is the magic number that Stephanie is aiming for — eight world titles to become the most decorated female surfer in WSL world tour history. But she admits that medaling in the sport's Olympic debut is her top priority right now. Though not all of the details are fully finalised yet, the multi-day surfing competition will take place on the beaches in Chiba, which is about an hour drive outside of Tokyo, she told POPSUGAR. Leading up to the event, she's working with her board shaper to ensure that her boards feel "electric in small waves," because, she explained, the waves in Japan are known to be "quite soft."

Stephanie doesn't have a set schedule for weekly workouts: the key remains changing it up. That could mean rock climbing one day, breath work where she reenacts wiping out another day, or practicing hand-eye coordination by playing catch while balancing on a Swiss ball. Her trainer will also ask her questions during workouts to flex her multitasking muscle and to get her mind and her body moving at once. This, she said, all benefits surfing "because you're constantly thinking and adapting and changing."

Gym sessions mainly focus on core stability and, since performing maneuvers through the waves is about squatting and twisting, Stephanie said they'll work her lower-body strength and her obliques specifically. Other than that, she plans on trying to surf daily, something she typically does while training. Surfing itself, she said, is a great workout: "it's upper-body strength, it's cardio, it's core, it's balance, it's legs, it's everything all rolled into one." On any given day, she could be in the water for up to five hours (She loves it, remember?).

"There is no better relationship, really, for a human being than to have one with an element in nature and with something as powerful as the ocean."

Not to mention, Stephanie, who ranked 4th in the world after the 2019 Women's Championship Tour, is also set to compete in the 10-event tour this year beginning in March. The sixth tour stop in South Africa concludes just days prior to the start of the Olympics, she explained, so she may be opting out of that one. Missing an event, even when competing in Tokyo, would impact her ranking on tour, but Stephanie said it's worth it, especially given the fact that she already has more than a handful of world titles checked off. "I think I'm in a really good position where I'm able to maybe adjust my year plans to make sure I can put all of my focus and energy into the Olympics."

The passion for surfing that once consumed Stephanie still does. "It's like the first thing you think about in the morning and the last thing you think about before you go to bed because the ocean is forever changing," she said. "There is no better relationship, really, for a human being than to have one with an element in nature and with something as powerful as the ocean."

After discussing her hobbies (she's pretty stellar at the guitar) and her choice in pre-competition music (Rihanna, Beyoncé, and Led Zeppelin all made the list), Stephanie opened up some more about what surfing's Olympic debut and, along with it, her own debut on the Olympic stage means to her. "At Roxy, we really love that idea of pushing girls to make waves and move mountains and just get out there and not be afraid to do things that you've been inspired by," she stated. She's taking the charge by claiming something she aspired toward growing up.

Stephanie remembers watching the 2000 Summer Olympics in Sydney when she was 12 years old. "I fell in love with the idea of going to the Olympics. I never thought I'd get the chance as a surfer, but here we are, and it's like a dream come true," she said, adding of a potential gold medal finish: "I don't wear too much jewellery, but that'd be a nice necklace to have." 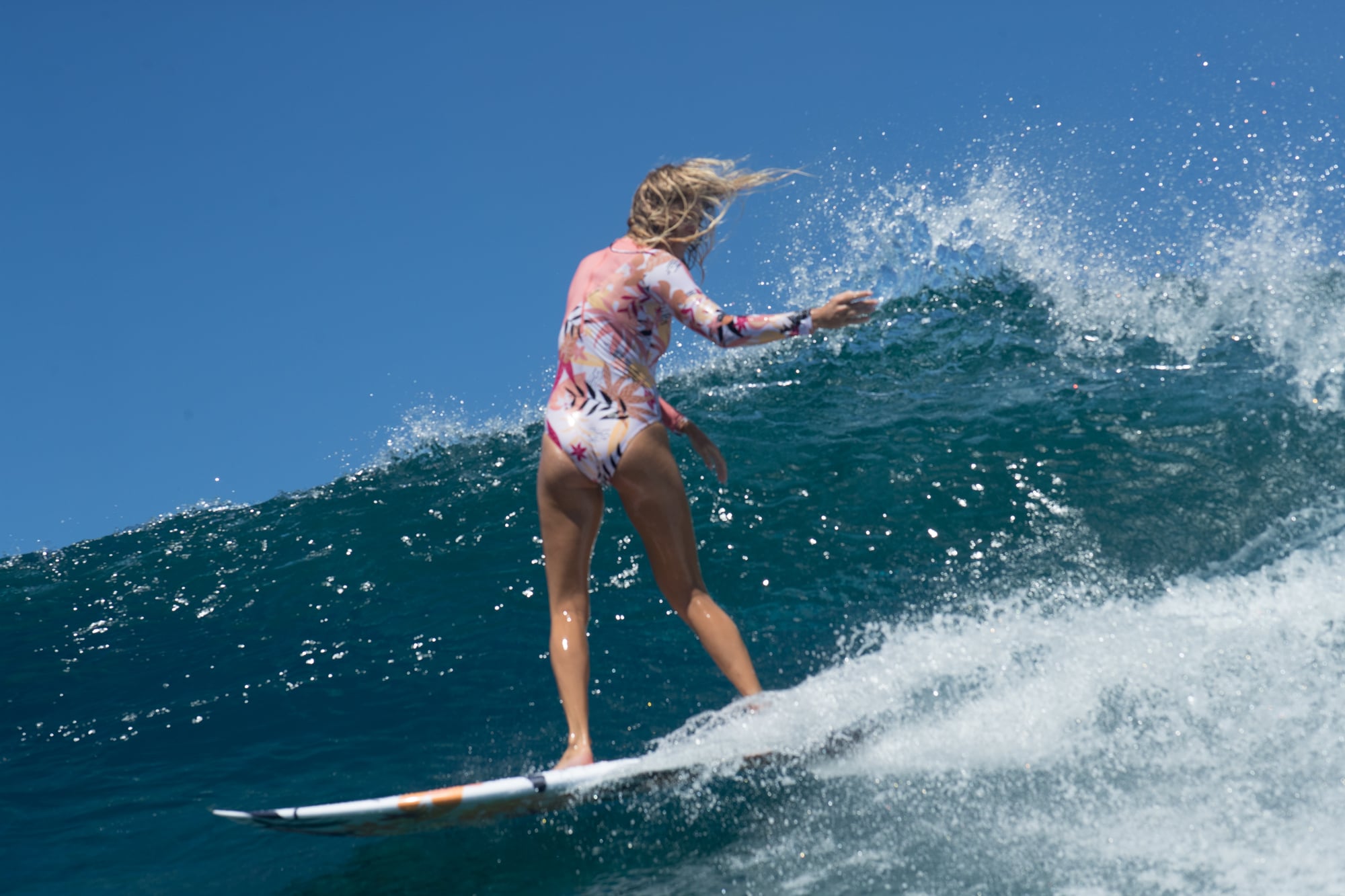