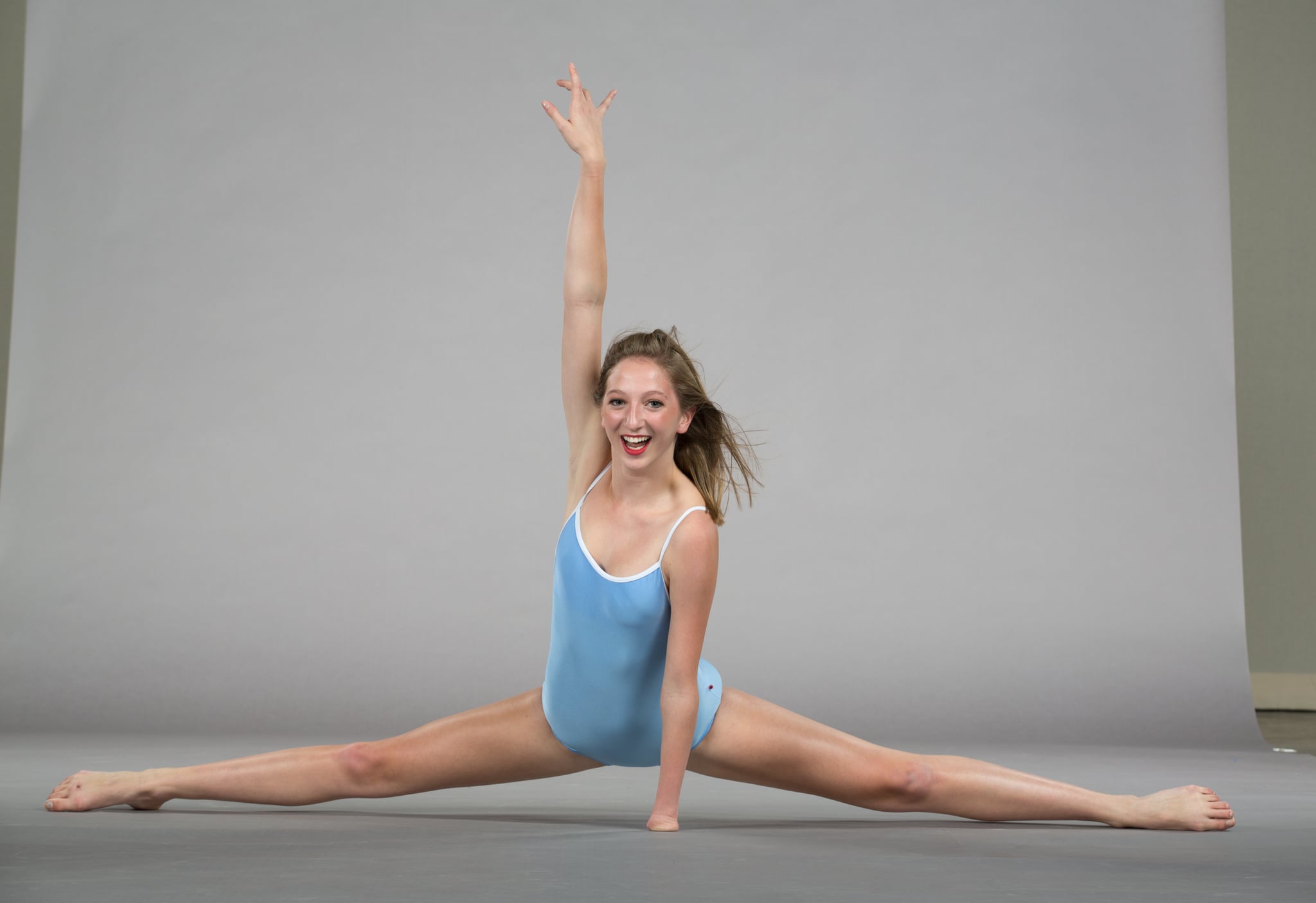 Sydney Mesher says she came out of the womb dancing. "It was so natural for me. I grew up with music playing all the time," she told POPSUGAR. "My dad's a huge Rolling Stones fan and took me to a concert when I was age 2." Her parents knew from that point on that she was going to pursue dance, and as she explored movement in different classes, she grew more serious about the craft.

Mesher, 23, was born with a rare congenital condition called symbrachydactyly, which caused her left hand to not develop. Though she got a prosthetic when she was in kindergarten, she didn't wear it for long — it felt unnatural and uncomfortable, she said. "Honestly, in my opinion, it drew more attention to the fact that I didn't have a hand," she explained. "The prosthetic was obviously way different back then — the technology's really advanced now — but you couldn't move it." It was more cosmetic than functional.

Growing up in Oregon, Mesher went to a public high school with a dance performing arts division, and she then studied Fine Arts at Pace University (her degree is a Bachelor of Fine Arts in Commercial Dance). Her focus of dance, she said, is hip-hop and jazz. Though having a limb difference brings its challenges — especially during partner work or using props — it has helped her become a problem solver, which she said benefits her in everyday life and in her career.

Mesher faced some bullying as a dancer but noted she shifted her mindset to push that aside. And, she didn't want to find success because she was being "checked off of a list" as a disabled person; she wanted to find success because she was good at what she did and comfortable in her own skin so that "when I was presenting myself in an audition or in a casting, I deserved to be there and had the talent to show with it."

"I'm all about presenting a new normal in the industry."

Some of her biggest accomplishments to date are dancing for BTS at a 2018 Citi Field concert in New York City. The following year she was in a Hollister campaign. "I'm all about presenting a new normal in the industry because I think it's really important to see diversity in every element, and that job allowed that to happen," Mesher said of the campaign.

Mesher also was the first dancer with a visible disability to perform as a Rockette at Radio City Music Hall. She got the job after her fourth time auditioning and was part of the 2019 production that lasted through the holiday season (this year's Christmas Spectacular Starring the Radio City Rockettes shows have been cancelled due to COVID-19). Practicing and going out on stage with all of those women, she said, was a highlight for her — and, yes, she still remembers the choreography ("It's drilled into us," she added, laughing).

Mesher said she's accepted the fact that she has a disability — that's the point. "There's a horrible connotation with the word disability. It's people's perception of that word and it doesn't necessarily need to be a bad thing, in my opinion," she said. "It's something that's unique." She acknowledged the fact that her disability is not super limiting, and so that gives her, in part, privilege. That being said, she understands others don't refer to their disabilities in such a positive light, "but I think it's time to start reshaping the perception of the word disability."

When it comes to social media, Mesher has devoted her platforms, especially TikTok, to educating people about her disability in an approachable way. She has over 32,000 followers on TikTok and posts lighthearted videos to note that circulating trends are not always considerate of people with all kinds of abilities and that ableism is real.

In the dance industry, typecasting does happen, Mesher said, though she isn't sure there has ever been an instance where she was not picked for a role because of her limb difference. "I thankfully never experienced any deliberate discrimination like that, but it doesn't mean that it doesn't exist," she said. Her jobs this year have altered because of the COVID-19 pandemic, but she was able to do some speaking in honour of the 30th anniversary of the Americans with Disabilities Act of 1990 (ADA), and she intends to return to the Rockettes for the next audition phase.

"A quote that I grew up living by . . . and my dad used to say it to me anytime I faced a hardship . . . was, 'You can do anything that you put your mind to,'" Mesher recalled. She wants other dancers with physical disabilities to keep this idea close — that they can persevere despite seemingly impossible challenges. That barriers can be broken.