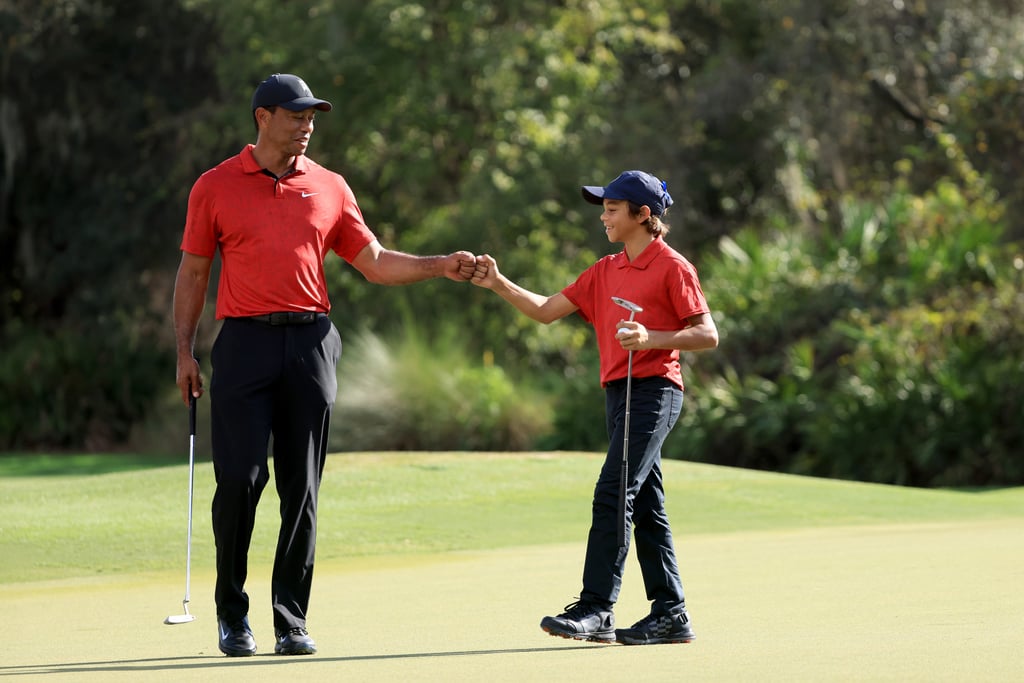 Look, I've seen a lot of cute things over the past year, but Tiger and Charlie Woods golfing together, a mere 10 months after Tiger's major single-car accident, are making a last-minute run for the top spot. The father-son duo put on an absolute show this past weekend in Orlando, FL, casually breaking a tournament record for most birdies in a row (11!) to come in second place at the PNC Championship.

It's the second year Tiger and Charlie competed together in the tournament, an exhibition for PGA Tour and Champions Tour golfers and their children. In 2020, Charlie became the youngest to compete in the tournamentTK at age 11; this year, he and his dad made another kind of history with their birdie streak, which came late in the tournament on Sunday to help them secure second place. Team Daly (John Daly and his son, John Daly II) beat them by two strokes.

Watching Team Woods compete together is a treat; in mannerisms and, clearly, athletic talent, Charlie is basically his dad's mini-me. But it was especially heartwarming when you consider that this was Tiger's return to pro golf following his car crash in Los Angeles, which severely injured his right leg (amputation was on the table at one point, Tiger said) and raised legitimate questions around his future in golf.

"I'm happy and thankful that I'm able to do this," Tiger said after the tournament. "I still have my own leg, which was questionable for a while. And it's functioning." The 45-year-old golfer added that the competition left him "a little worn out," explaining, "I'm just really tired. I'm not used to this."

As for getting to play with Charlie, Tiger said in a press conference, "To have this opportunity to be able to play with my son and to have these memories for us, both of us, for a lifetime, is worth all the pain [of the recovery process]." Their two goals for the weekend: have fun and no bogeys. "And we accomplished both," Tiger said.

And cue happy tears. Keep reading for photos of Tiger and Charlie doing their thing on the course.

Related:
Jordan Chiles's First Practice as a UCLA Gymnast Did Not Disappoint — See For Yourself
Previous Next Start Slideshow
GolfAthletesSportsTiger Woods