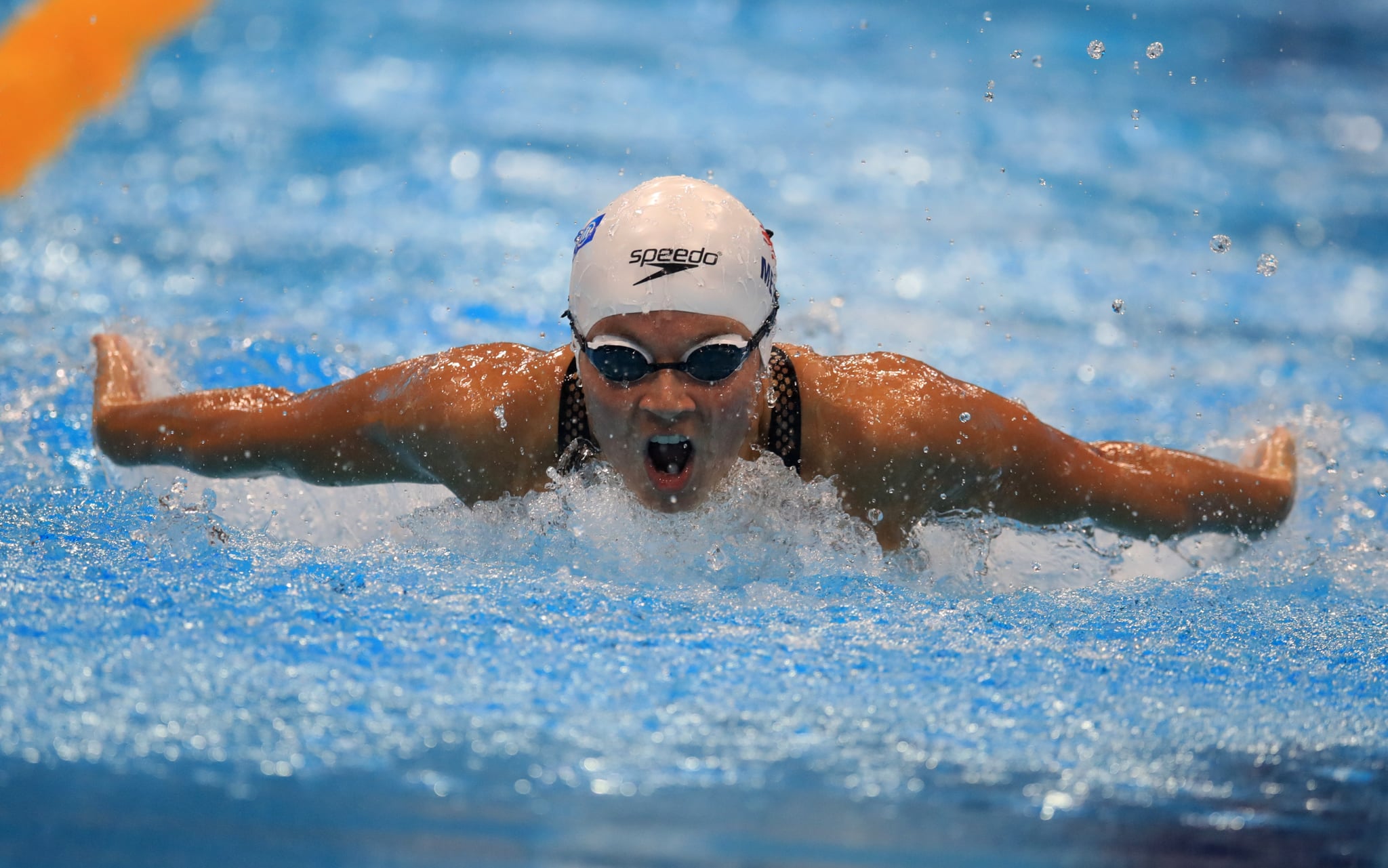 When Rebecca (aka, Becca) Meyers found out that her chance to qualify for a third Paralympic Games in swimming would be postponed until 2021, she was disappointed at first — when you're working toward a goal and get hit with news that your training will take a turn, it'll do that to you. But she had anticipated some type of postponement or cancellation once her home state of Maryland started shutting down bars, schools, restaurants, and more due to COVID-19, she said. And, the 25-year-old took that opportunity to gain traction on her other goal: finishing school.

Meyers, who broke two world records at the 2019 US Paralympics Swimming Para National Championships and who has six medals across two Paralympics already, focussed her time on finishing up her history degree from Franklin and Marshall College online. "I really liked it because I was able to take all my energy from swimming, my goal setting, my determination, and put it into school," she told POPSUGAR. "My priority became school and it gave me a purpose to wake up, to do school work, and to work towards completing my degree." She'll be a part-time student in the spring and graduate in May of next year before her go at the Tokyo 2021 Paralympics.

Meyers was born deaf due to Usher syndrome, a rare genetic disorder characterized by deafness and progressive loss of vision, and she received two cochlear implants growing up: one when she was two years old and another when she was 15. She lost her peripheral vision due to Retinitis Pigmentosa, which affects the retinas over time, and said she made the decision to get her second cochlear implant in her teens "for localizing sound because my vision was starting to go. And it made a huge difference," Meyers explained. "I can just hear better." Her eyesight will continue to decrease, but it is relatively stable as of now, and she's been supported by a guide dog named Birdie for five years.

Meyers swims in the S12 classification of the Paralympics — there are three classifications total for visual impairments, and S11 is reserved for athletes who wear blackout goggles and are assisted by a tapper letting them know when they're nearing the end of a pool lane. She does, however, as she explained, "swim up to a higher class" of S13 for certain events.

Her current training looks different than it did back in March when Meyers says she was at the top of her game and living in Washington DC. Usually, she'd swim six days a week, eight to nine sessions in the pool, with additional sessions for weightlifting and more cardio out of the water. She's now back home in Baltimore and swims at a local gym, and her coach, Bruce Gemmell, best known for coaching Katie Ledecky, also sends her workouts via text. (She does classes on her Peloton bike, too!)

Meyers's goals for the postponed Games are the same as they were leading up to the postponement: she wants to medal in all of the events she plans to swim in — the 100-meter butterfly, 200-meter IM, and 400-meter freestyle in the S13 and the S12 100m freestyle. Aside from that, she also wishes to qualify for and compete in the Olympic trials, a rare yet doable feat for professional athletes.

This ambition, Meyers said, is very similar to the goal she had in her college swimming career for Franklin Marshall before she turned pro. "I just wanted to qualify for NCAA Division III Championships, and I did. And then when I got to the meet, I just wanted to place in the top eight, and I did," she explained, adding, that if she made it to the Olympic trials next year in Omaha, NE, she'd simply aim to enjoy the experience.

"Just because you have a disability doesn't mean you are limited. You just have to find that one thing in life that makes you feel free and go for it."

For athletes who have similar impairments to Meyers, she wants them to know that half the battle is showing up. "Especially in a competition, you never know if someone else is off their game and it could be your day. You just got to be ready for anything, and sometimes all you got to do is just show up." Your hard work, too, will pay off, she said.

The most important thing, Meyers concluded, is making sure that you enjoy the sport you're in because it can be an escape. "Swimming, for me, is my happy place, my therapy place, and so I can go to the pool and just forget that I'm deaf, forget that I'm visually impaired, and swim for the love of it." She added, "Just because you have a disability doesn't mean you are limited. You just have to find that one thing in life that makes you feel free and go for it."