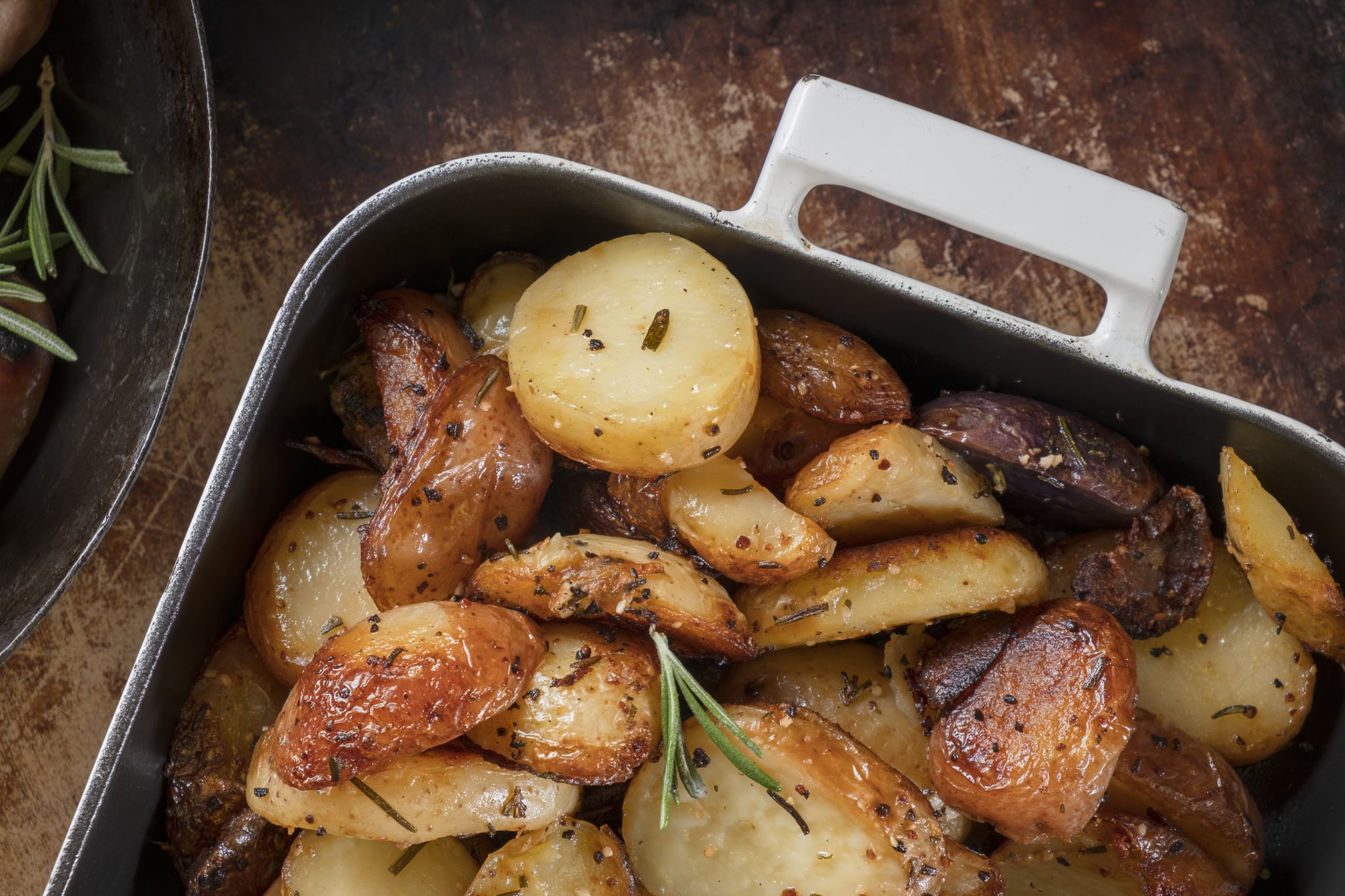 Let's be honest here: for many of us, roast potatoes are the star attraction of Christmas dinner (it's never the sprouts). We all feel pretty passionate about them, and every single member of your family will have an opinion on the best way to cook them. Hot oil? Duck fat? Olive oil? The methods vary wildly (although the potato variety tends not to — it's Maris Piper all the way). A lot of our favourite TV chefs have a foolproof roast potato method, but here's what they do at Christmas when they want their roast spuds to be really special.

Of course Mary Berry opts for the classic maris piper, what else? She opts to cook her spuds in goose fat and also has a couple of time-saving tips for the big day. Part-roasted spuds? If it works for Mary, we're willing to give it a go.

Jamie is the king of classics with a twist, and this year, his roast potato offering is no exception. He's whipping up "black roast potatoes" on his show Jamie's Italian Christmas, which airs on Dec. 19. Not convinced? Try his festive sage and orange recipe or his classic perfect roast potatoes. He reckons using a potato masher is the key.

Nigella's perfect roast potatoes feature in her Christmas book, and she's firmly in the camp that the oil should be searingly hot before the spuds go in. She's also got a nifty trick up her sleeve for the ultimate crispiness: covering them in semolina.

The Hairy Bikers: With Polenta

Like Nigella, The Hairy Bikers are fans of hot melted goose fat, but they opt for a good scruffing up after boiling and then a dredging in polenta for maximum crispiness.

It's actually Gary Rhodes' wife Jennie who takes care of the roast potatoes on Christmas Day. She gives them a shake to fluff up the edges so there's no need for hot oil.

Gordon Ramsay: With Chilli and Turmeric

If you want something a little less conventional on Christmas Day, try Ramsay's spiced roast spuds. Here's a video of him making them — he even ropes his mum in to help, and amazingly she doesn't immediately put her sherry down and take over the entire running of the kitchen.

There's really nothing sexy about lard, but if you want roasties the Delia way, then you've got to go all in.

Tom Kerridge: Boil Them All the Way

Tom Kerridge has no truck with parboiling. He reckons that this leaves unwanted moisture in the spuds, which stops them from going crispy. His method tells you to boil all the way through so be careful not to shake or over fluff or you'll be left with Christmas mash instead.

Don't fancy goose fat? Opt for groundnut oil like Hugh instead. This is a simple recipe, and your potatoes will have a really interesting flavour. Perfect if you want to mix things up without any extra faff, or if you're serving up a vegetarian feast.

If you're going to follow a Heston recipe, you're probably already aware that a certain amount of effort will be involved. His Christmas roast potato recipe is a delicious concoction of beef dripping and homemade herb salt.

Nigel Slater: Around the Bird

Nigel also opts for goose fat (it's richer than duck fat), but he chooses to cook his around the bird if there's room in the tin. Meaning that you've got extra room to try out his chickpea and lemon stuffing. Don't forget: your kitchen, your rules.