When I first learned that cake mix can be turned into cookies, my whole baking worldview expanded. Now, this Cinnamon Toast Crunch dump cake with peach pie filling on TikTok has me questioning why I haven't made more Frankenstein-esque cereal desserts, because it only takes five minutes to throw together. Sophia Wasu, aka @aquickspoonful, shared the five-ingredient recipe for the cake-pie combo in a video on her TikTok account, and you might have everything you need to recreate it in your pantry right now.

Like all dump cakes, the Cinnamon Toast crunch peach pie masterpiece requires no mixing, so it's super low effort with a high (read: delicious) reward. I haven't had the chance to try the dump cake for myself yet, but Sophia says it's "better than peach pie," so it sounds pretty dang promising to my taste buds. Read the full recipe ahead and don't forget to serve the cake hot with a big scoop of vanilla ice cream on top. 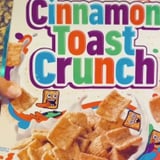 Makeup
I Tried the Viral "Dot" Contouring Hack From TikTok, and I'll Never Go Back
by Jessica Harrington 3 days ago

Hair
I Tried Plopping My Hair Like I Saw on TikTok, and It's Completely Changed My Routine
by Jessica Harrington 2 weeks ago