If you've ever been annoyed when your significant other asks to share your food even though they have their own plate right in front of them, grabs a French fry from your pile without checking, or tries to talk to you too much while you're enjoying a meal that requires your full attention (yes, this is a thing), then you're going to love following Ling and Lamb on social media. Ling and Lamb, whose real names are Tacarra Rae and Yinka Lawanson respectively, first met on the set of his music video for "Give Me Love" in 2018. Lamb is originally from Nigeria and Ling is from the US, and their joint social media account consists mostly of videos of Ling taking her husband to try new foods in their home state of Connecticut and filming his reactions. They've captured his first times at places like Chipotle, The Cheesecake Factory, Boston Market, and more, and his reactions (and her laugh and commentary to his reactions) are so pure, cute, and hilarious. Like, it takes a lot for me to laugh out loud at something and I was cackling nonstop while scrolling through their videos.

"[When Lamb likes something], his eyes twitch or bug out of his head or start searching all over the room. It's the most hysterical thing in the world!"

While Lamb has a signature "cap turn" of turning his hat backwards when he likes something, Ling explained that that's not actually the first sign that he approves. "It's funny, most people think it's the 'cap turn' that signals Lamb's love for the food/dessert he is eating. While it is 'the Cap of Approval,' the first sign is actually his eyes," Ling told POPSUGAR. "His eyes twitch or bug out of his head or start searching all over the room. It's the most hysterical thing in the world!" Indeed, in many of their videos, Lamb has a "ah-ha" moment where he realises the thing he's eating is, in fact, insanely delicious. It's especially hilarious when he's sceptical about it at first but then succumbs to the fact that he was very, very wrong (i.e. the time Ling made him get up at 6 a.m. for fresh doughnuts and he was annoyed, but then took one bite and made sure she got a dozen).

When it comes to American food, Nigerian-born Lamb is still having fun trying all of the different options. "I don't have a favourite American Food as of yet — there are so many amazing foods I have tried since starting our Ling and Lamb journey, but I know there is SO much more to explore, so I have to answer this question down the road," he told POPSUGAR. "As far as my favourite fast food restaurant, it is hands down Chick-Fil-A! The first time Ling took me there, it was love at first sight."

And Ling is also still familiarizing herself with Nigerian cuisine as well. "While I have not tried a lot of Nigerian dishes as of yet, I would have to say that my favourite one is Vegetable Soup with Farina Ball, properly known as Vegetable Soup with Eba," she said. "I am laughing [right now] because 'Farina Ball' is a substitute for a Nigerian side called 'eba,' which is made from cassava (but I am not a fan), so [Lamb] substitutes it for good ol' American Farina! I definitely cannot wait to try more dishes when we both visit Nigeria later this year or next."

Lucky for us, the couple's food journey is only just beginning. "Lamb and I were foodies as single people, so the mutual love for food only grew when we got together," Ling continued. "Lamb is an incredible cook and his cooking lessons are also an amazing way that we are able to bond and a great way for me to learn more about his cultural dishes."

If you're ready to LOL many times and find a new account to follow on social media ASAP, keep reading to see some of Ling and Lamb's best videos, and check out their TikTok and YouTube channels here. What food should they try next?! 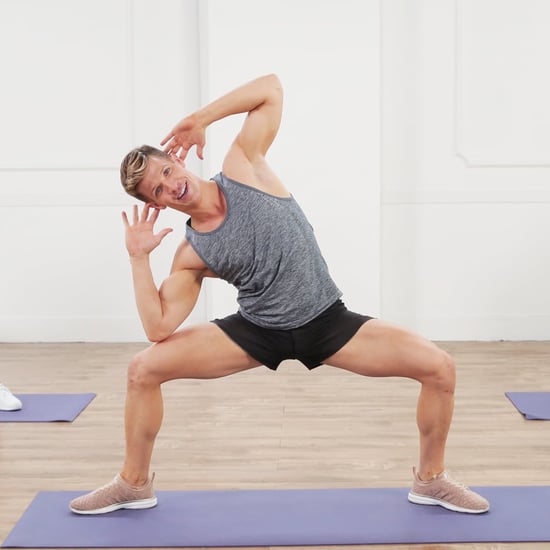 Instagram
Sweat It Out With Jake DuPree, Beth Alexander, and More in This Week's Intense Live Workouts
by Maggie Ryan 2 weeks ago