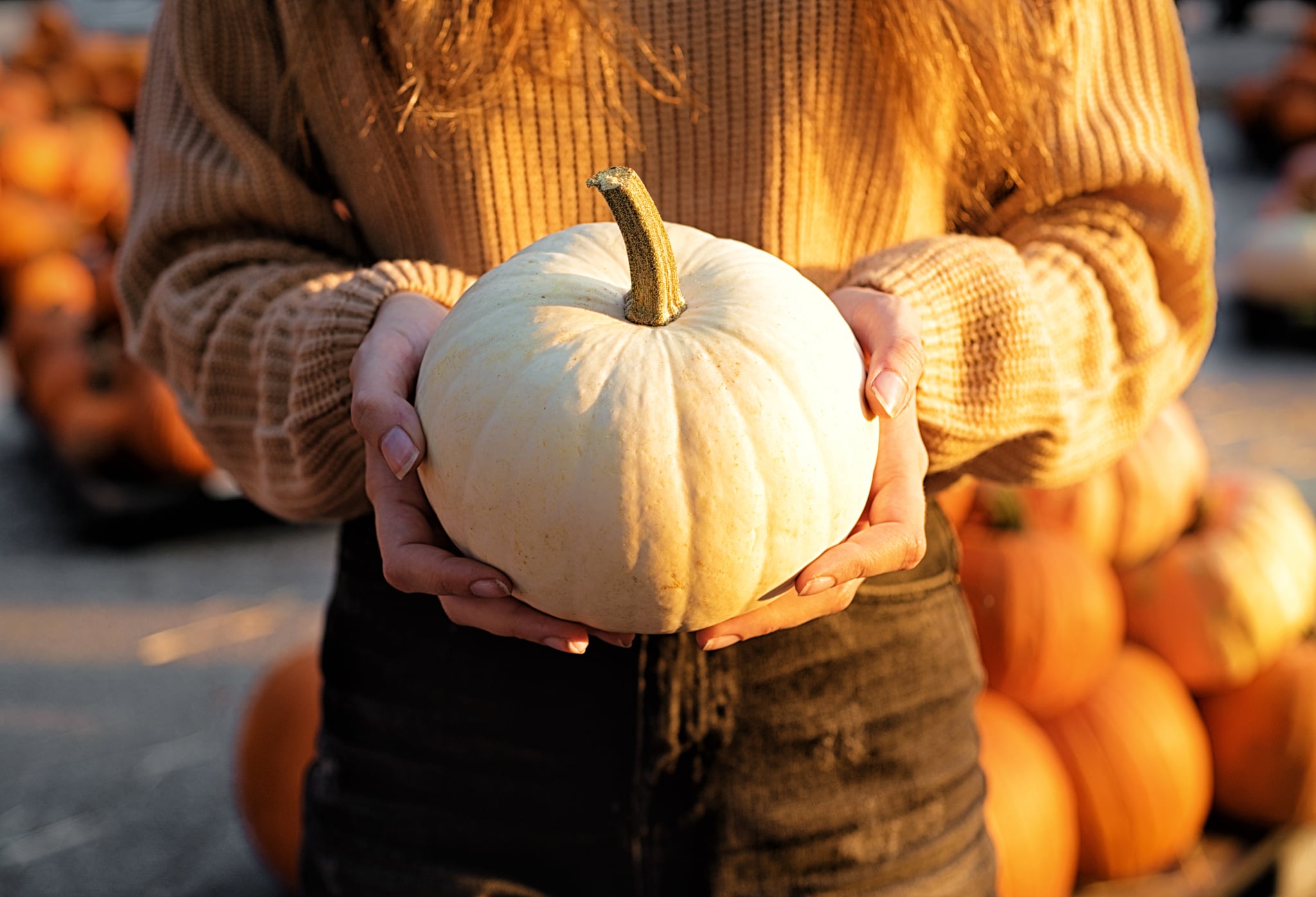 It's officially October, which means you can be pretty sure the rest of the month will be filled with pumpkins, pumpkins, and more pumpkins. Although the typical orange varieties we're used to seeing will definitely remain a staple of the season, this year it seems that white pumpkins are truly having their moment. Beyond classic Halloween decorations, many people are having a more *aesthetic* fall, and are looking toward monochromatic decor and unique pumpkin-decorating DIYs to spruce up their homes for the holidays. The popularity of white pumpkins feels almost as if it's happened overnight, and it's left many people wondering where these ghostly gourds game from. Ultimately the white pumpkin's snowy colour is tied to a difference in genetics. But it didn't happen by accident; farmers and scientists specifically bred the unique colour. So if you're looking to hop on this season's white-pumpkin trend, here's exactly what you need to know about the gourds.

Related:
Put Down the Carving Tools, This Marbled-Pumpkin DIY Is the New Jack-o'-Lantern

Can you eat white pumpkins?

The short answer: yes, absolutely! The longer answer: sure, but you might not want to. "All pumpkins are technically edible, but some taste better than others," said nutritionist Marissa Meshulam, MS, RD. So what can you expect when you cut into a white pumpkin? Well, essentially the same thing you expect with an orange pumpkin. Most white-pumpkin breeds have an orange interior and contain vitamin A and other helpful nutrients to give you a boost. When eating, you might not even notice a difference in flavour, and you can essentially incorporate white pumpkins into the same recipes that you use for orange pumpkins. If you are looking for ways to incorporate pumpkin into your diet, then check out a few of our favourite fall pumpkin recipes.

Do white pumpkins have seeds?

Can you carve white pumpkins?

Once again, the answer is yes. The only things you need to carve a white pumpkin are a carving knife and a little bit of imagination. Oftentimes, white pumpkins are actually easier to carve than their orange counterparts, as they have a softer exterior. If you don't feel like getting your hands too dirty this Halloween, though, there are plenty of other ways you can decorate your white pumpkins — think paint, permanent marker, collage, you name it.

Maya Jama
Maya Jama's Halloween Party Was the Place to Be this Weekend, and the Costumes Were Epic
by Kara Kia 01/11