Not all my veg are perfect cheers pic.twitter.com/NLXOZTUcZ7

Gerald, Your Veg May Not All Be Perfect, but You Certainly Are

Look up the term "wholesome" in the dictionary, and you just might find a photo of Gerald Stratford grinning with pride from behind wire-framed glasses with several giant freshly picked carrots in hand. A 71-year-old resident of Oxfordshire, Gerald has carved out a special corner of Twitter where he shares updates about his latest gardening adventures and accomplishments, and it's the pure, uncontroversial content the world needs right now.

A retired fisherman, Gerald has been gardening for more than 60 years; he helped his father grow vegetables for their family as an adolescent, and he now tends to a sizeable garden and greenhouse with his parter Liz. Together they plant all sorts of crops — potatoes, cauliflower, parsnips, cabbage, flowers, and so on — but Gerald loves harvesting particularly enormous produce. To date, he's grown 3-foot-long carrots, a 2-foot-long cucumber, and a 152-pound pumpkin that could basically double as Cinderella's carriage. What Gerald and Liz don't eat fresh, transform into a chutney or jam, or toss in their new dehydrator, they donate to local care homes in need.

Related:
7 Indoor Garden Kits You Can Get to Flex Your Green Thumb

Looking to connect with fellow fans of gardening, Gerald joined Twitter last February, and since then, the grandfather has amassed more than 170,000 followers who flock to his page for glimpses at what he lovingly refers to as his "big veg." His captions — many of which are endearing run-on sentences — typically end with an adorable "cheers," which Gerald describes as "a lovely, happy word that I have used all my life." It wasn't until May 2020 that he went viral after posting a snap of his "first early rocket," a bowl of fresh, golden potatoes.

Recalling the influx of engagement the tweet received afterward, Gerald said, "About an hour later my phone started going mad. I didn't know what was happening. I rang my nephew Stephen and asked him. He said he'd have a look and get back to me, [and] when he did, he said, 'Gerald, you've gone viral.' I even had to ask him what that meant. I was absolutely amazed and humbled to think so many people liked what I had put up." He added, "It feels wonderful to have reached so many people and given them a bit of happiness."

"An ugly carrot tastes just as good as a perfect one."

When Gerald isn't tending to his vegetables or whipping up a chutney with Liz, he's combing through dozens of messages from his social media followers, many of whom ask for tips on growing similarly huge produce. His advice is simple: "Be patient and just enjoy," he told me via email. "An ugly carrot tastes just as good as a perfect one. Also don't be afraid to ask for advice." So, what's next for England's very own "Potato King"? He's had a few inquiries about possibly publishing a book, but he'd rather focus on his garden. "This next year I am going to concentrate on growing a monster marrow. Whether I will succeed I don't know, but I'll certainly enjoy trying." I, for one, will certainly enjoy following along as he shares updates on said marrow.

If you need to add some especially wholesome content to your newsfeed, be sure to keep up with Gerald on his Twitter account and equally as heartwarming personal website. Get a preview into his one-of-a-kind Twitter aesthetic by browsing some of my personal favourite tweets ahead. Cheers to you, Gerald, for brightening my week.

Staying Home
A Grandma Made Social-Distancing-Themed Barbies, and Her Attention to Detail Is Incredible
by Murphy Moroney 29/5 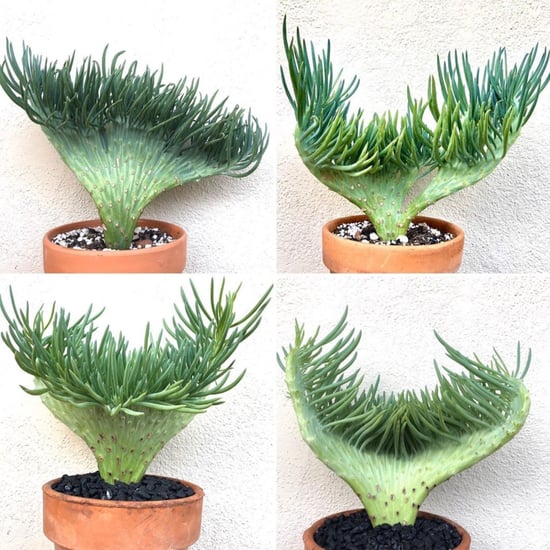