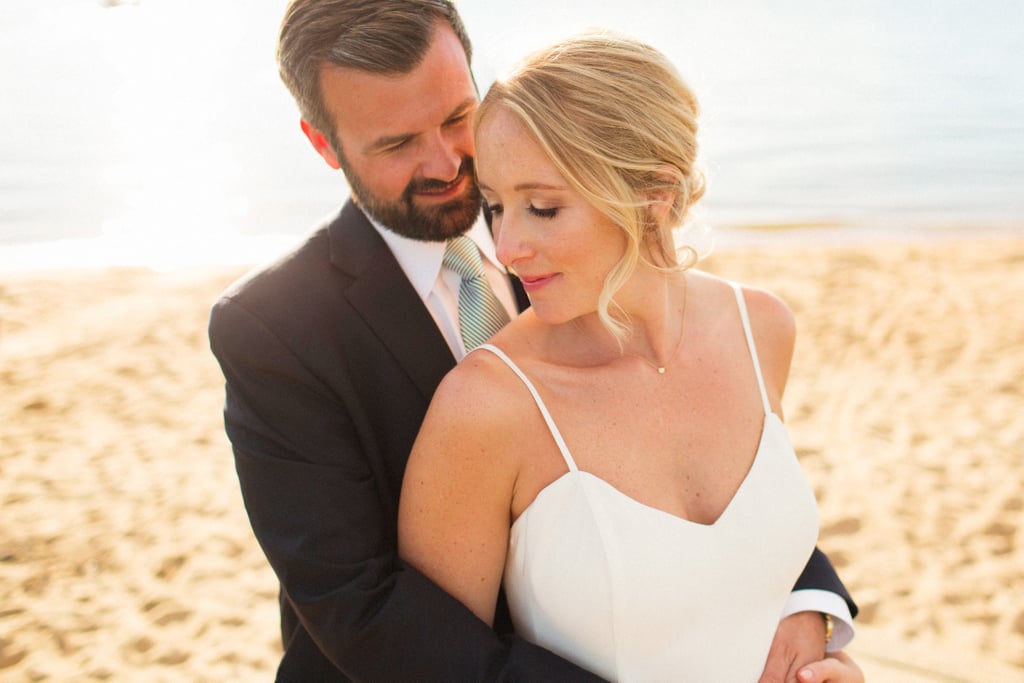 If you're looking to have a wedding that's traditional, classic, and fun, this is all the inspiration you'll ever need. On Sept. 24, 2016, Grace, a former POPSUGAR employee, and her husband Jon tied the knot in the United States in Block Island, RI, a place special to both of them. Although the two met in San Francisco, they soon realised they both grew up going to the same beach in Rhode Island every Summer. So it was decided that Block Island, an island they looked out at from that beach, would be the perfect location to say "I do."

When it came to wedding inspiration, Grace wanted to keep things simple yet chic. Her dress was even designed for easy wear, complete with pockets for her lipstick and hankie. "I chose to work hard at not making our wedding feel overly 'done' and instead focused on making our reception feel like a warm and sophisticated backyard get-together," Grace told POPSUGAR.

The bride and her mother designed and sourced their centerpieces from Ikea, classic matchbooks were given as favours, and Grace's favourite part was the handmade banners that hung the length of the tent, which were made as a wedding gift from a family friend.

"To us, the details we chose were perhaps not innovative and flashy, but absolutely heartfelt and loaded with sentimentality and tradition," she said.

Each of the couple's loved ones were incorporated in their wedding day in some special way. The jacket Grace wore during the ceremony was custom-made from the lace of her grandmother's wedding dress, and the veil was hers as well. Jon's mother removed the stitches from his christening cap on the morning of their wedding so that Grace could carry it as a handkerchief. Their cake topper and "bride" and "groom" Champagne glasses were both used by the bride's parents at their wedding. Grace's sister painted the fern on wedding signs, and her brother surprised them with custom corn hole boards that friends signed at the reception. Jon's father married them, her own father sang during their ceremony, and both of their mothers did readings.

"Our ceremony will always stand out to me as a favourite moment," Grace said. "We had both of our families involved throughout. As mentioned, our parents all had integral roles in the ceremony, and additionally, our siblings made up most of our wedding party and our nephews and niece were the ring bearers and flower girl. Jon and I chose all of the readings and songs that were shared and wrote our own vows, which we recited to each other for the first time through shaky, tear-filled breaths."

After all of the emotion, the newlyweds were really ready for the fun. They had always known since getting engaged that they wanted their wedding to be a party, which meant locking down Grace's favourite East Coast band, The Van Burens. The keyboardist is actually one of her best friends, and she had dreamed of them playing at her wedding even before meeting Jon.

Grace's final favourite memory of the night was at the very end of the reception, when her dad and brother got on stage to the perform "The Weight" with The Van Burens.

"I grew up listening to the band and have always had a special place in my heart for the song. At one point, I turned around and realised that every one of the guests was on the dance floor facing The Band and singing at the top of their lungs. I immediately burst into tears, like ugly-crying tears, and couldn't say anything but 'I'm so happy' between sobs. To see everyone that I love under one tent, united in song and united in their support for my new husband and me, was more than my heart could bear!"