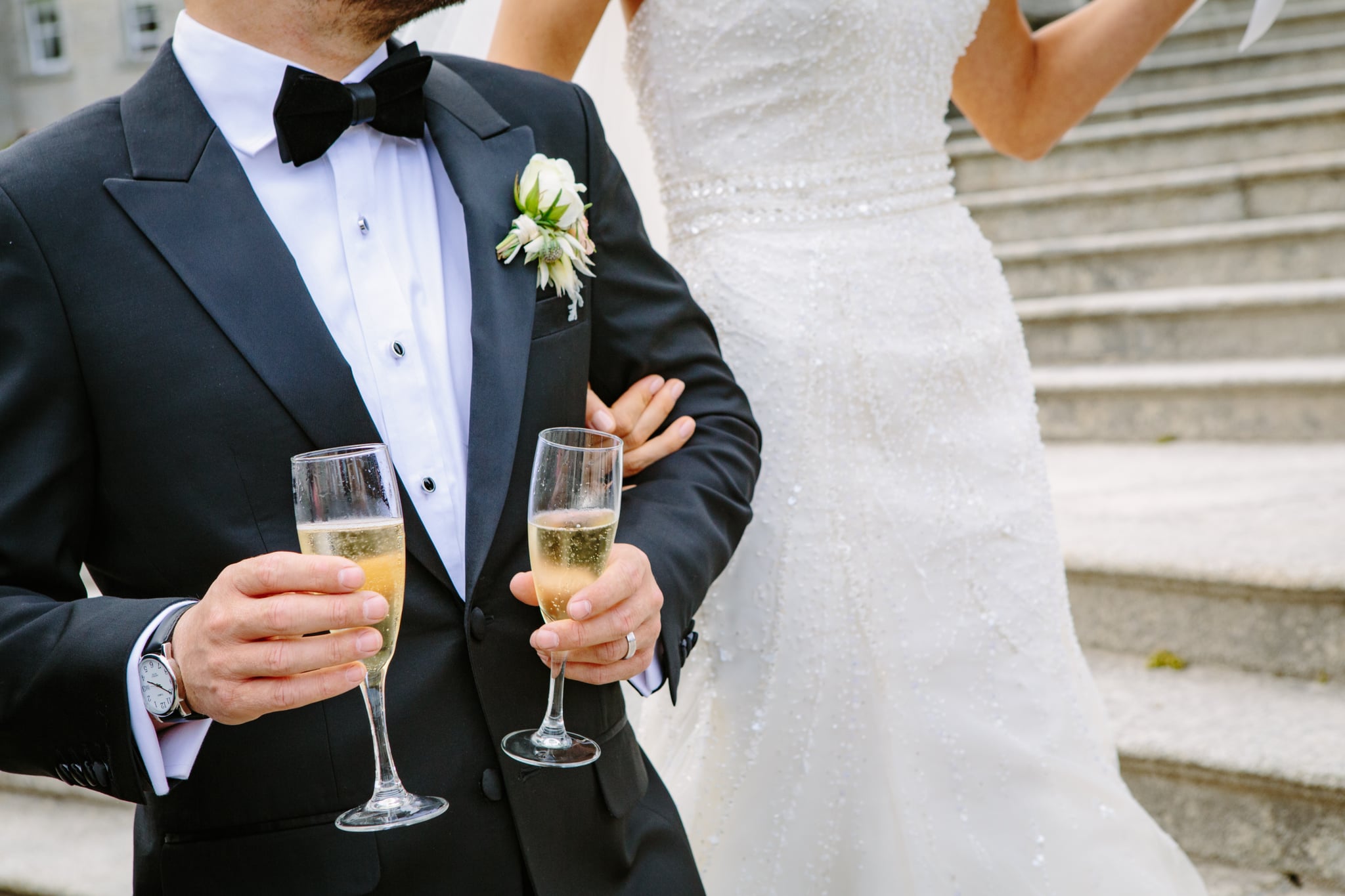 The question looming over me was "should we or shouldn't we?" It was the month leading up to my wedding, and while most prenuptial anxieties are in the realm of bridesmaid gifts, final dress fittings, playlists and weather forecasts, I was fixated on a conversation I potentially needed to have — one where I would prepare my grandparents for seeing me consume alcohol. Neither of them had ever been to a party where alcohol was served, let alone one where they would be granted a front-row seat at witnessing their youngest granddaughter consume it. So, while my groom and his family were contemplating the proper balance of Pinot Noir and Sauvignon Blanc, I was contemplating sparkling cider and grape juice.

The maternal side of my family, each member of whom is precious to me, had always made it clear that their love was plentiful. Still, I've often felt like an outsider hoping to be welcomed all the way in. Although we shared the same spiritual beliefs, they interpreted theirs in a more conservative and puritanical way. This meant no drinking, no swearing, no questioning of upbringing, and no button-pushing. But I came into the world a free soul — a bit of a wild card. A rebellious teen and young adult, I grew into a boldly individualistic and outspoken woman with more complex, diverse and inclusive ideals than those fitting of their standards. Their beliefs always landed on extreme ends of the spectrum which meant that, most of the time, something was either totally right or totally wrong, entirely true or not true at all. This also meant that they could never understand my openness to and curiosity about life's multitude of grey areas. In essence, their paradigm and perception of how a woman should behave were far more narrow than mine, and did not allow for the totality of my opinions, social activities and interpretations of the world to stretch out their arms and exist as they longed to.

So, when faced with the alcohol question, I was gripped with anxiety. My stomach flipped every time I envisioned seeing my grandmother's disappointed face. I wanted my groom and I to have the kind of wedding indulgences we desired, but not at the expense of hurting people I held so dear. This decision kept me up at night, staring at the ceiling fan. Would they think I was a feckless lush? Would I be considered a horrible example to my younger cousins? Would my aunt have to give them the "Now, we love Lacey, but we don't approve of her drinking . . . " speech? I shivered at the possibility of it all.

On that day, I gave myself the freedom not to hide. I let the real me stand up, wine and all.

It wasn't the first time I worried that way. For most of my life, I had tip-toed through my encounters with them — occasionally swinging from extremes such as behaving in ways that made me seem more aligned with them to revolting in the direction of my own curiosities and conclusions. But I always feared their disapproval — mostly because my birth mother had died when I was small and they were all I had left of her. I couldn't risk sabotaging that. Once, not long after my 21st birthday, while relaxing on the sofa with my grandmother, I flipped through one of her housewares catalogues and landed on a page with a wine rack on display. Her finger pointed to its steel grooves and she said "We don't do that, do we?" Her eyebrows raised inquisitively. I smiled nervously. I knew her intentions were protective and pure, but I also understood that the human model is stubborn; it often rejects anything in contrast to what it thinks it knows for sure.

So, as the days and weeks raced by and my wedding neared, I continued making a drama of the situation in my head. Until, while soaking in a bath one night and inventing ways to calm my nerves, I posed a series of questions to myself: Am I ashamed of who I am and the way I live my life? Do I feel bad about being an occasional drinker? Am I out of control, excessive or unsafe with alcohol? The answer was no, no and no again. So, if I believe I have nothing to be ashamed of, I thought, why am I expending so much emotional and mental energy toward shame and worry? Is it my responsibility or right to try and change their minds? Again, no. And, with that realisation, I stopped juggling my options. I would never glance backward.

Related:
I Let My Mom Plan My Entire Wedding

On the evening of my wedding, I raised my glass high for the champagne toast. I shimmied across that black and white dance floor as the band filled the air with classics from Al Green to Stevie Wonder. I traipsed all over the hill, taking in the subtle crispness of the autumn equinox. I chatted with my guests as they dined, posed for pictures with my groom and bridesmaids — chilled glass of white wine cradled in hand. I wasn't drunk necessarily, but more so generously tipsy. And I felt like Aphrodite.

Through that experience, I realised the point of it was not the alcohol. Rather, it was the principle of permitting myself to be authentic, whether I was given a familial nod of approval or not and whether I was being watched with judgemental eyes or not. On that day, I gave myself the freedom not to hide. I let the real me stand up, wine and all, even if doing so further confirmed that she wasn't quite the Lacey they probably hoped she would become.

Breaking through this barrier then invited me to break through others as well. I became more raw and forthright with them about my political views, as well as the ever-evolving nuances of my social and spiritual beliefs that are no one's right to critique, dissect, or formulate but my own. I never regretted drinking in front of my family on my wedding day, and I have no idea if any of those hypothetical conversations and judgements were even a reality. Because the decision to do so freed me.