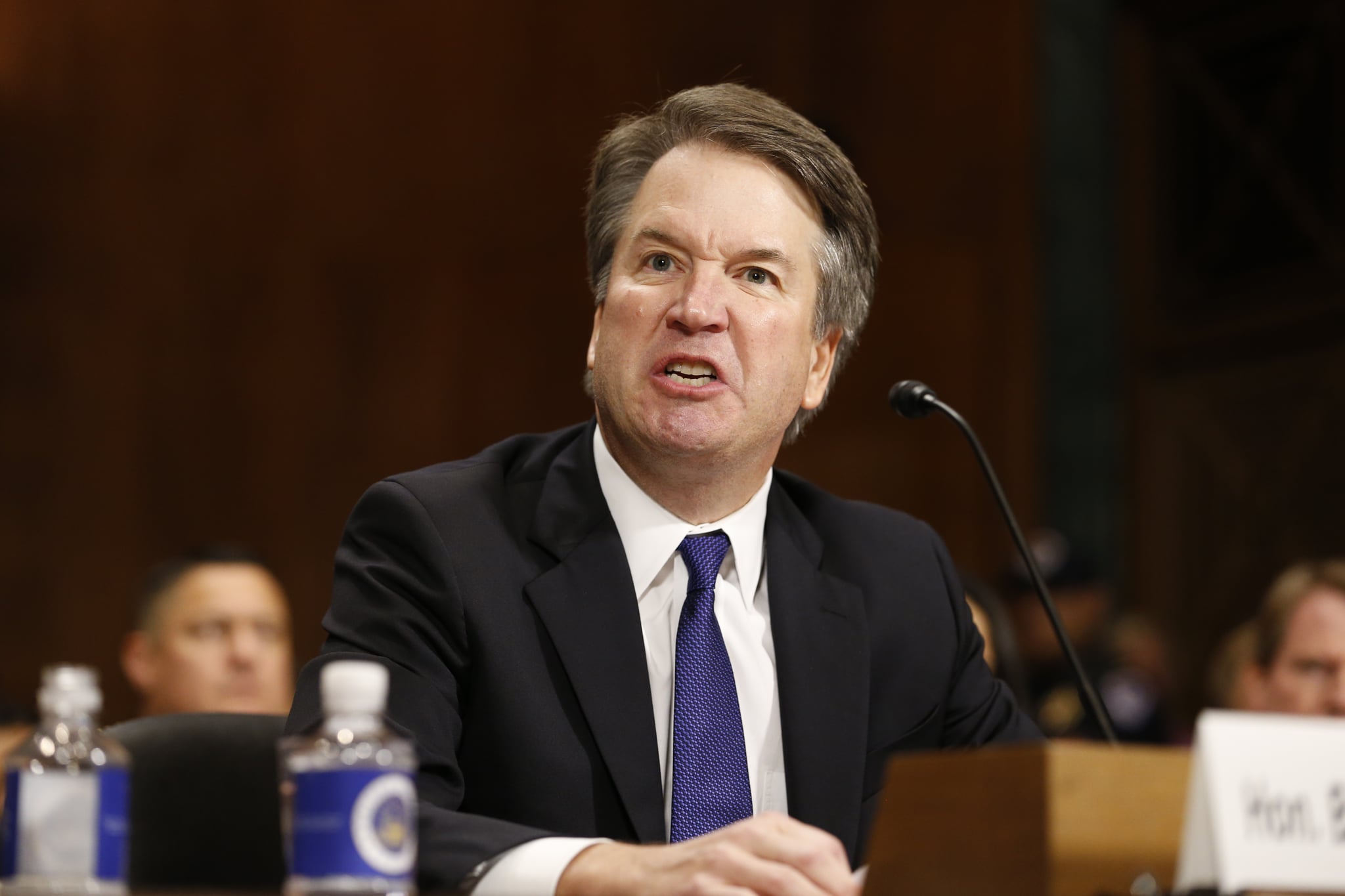 On Sept. 27, as the nation watched, Dr. Christine Blasey Ford and Brett Kavanaugh testified in front of the Senate Judiciary Committee — and the manner and tone of their testimonies were jarring in their contrasts.

Dr. Ford's testimony saw her vulnerable but quietly insistent, even when she was faced with a range of bizarre, political questions that were pointedly meant to discredit her. Ford's occasionally emotional — but measured and stoic — testimony and questioning were followed by Kavanaugh's. And his defencive outbursts, rage, unsettling references to partisan conspiracy theories, and pronounced disrespect for the Democratic women questioning him were shocking — even for a man credibly accused of multiple counts of sexual assault.

". . . His rage stemmed from shock, self-pity, and outrage that women's voices were actually being taken remotely seriously; that a woman could be the reason he doesn't get what he wants."

Photos of Kavanaugh's face contorted in unrestrained anger have since gone viral on social media, and are fostering a critical conversation about gendered double standards. Who is allowed to be angry, express intense emotion, and still be taken seriously and even sympathized with? As today's hearings illustrated, men are; women are not.

To be clear, Ford has accused Kavanaugh of causing her to fear for her life, and to struggle socially, academically, and emotionally in the aftermath of the alleged assault. Amid death threats, harassment, and very public attacks on her character, she's had to move out of her house and seek security for herself and her family. She initially did not want to come forward publicly, instead privately contacting one of her legislative representatives prior to Kavanaugh's nomination, when his name was still just on Trump's short list. Her experience being treated as a criminal suspect today, as she was questioned by a seasoned prosecutor — and has at different points blamed, shamed, and called a liar by some of the most powerful men in the country — speaks to exactly why between 63 and 90 percent of sexual assaults are unreported.

It's Ford, not Kavanaugh, who has been the subject of abject cruelty. It's Ford who's seen the most intimate aspects of her personal life placed at the centre of a political game by Republican men with no regard for her safety — men who are already determined to not believe her in order to advance their anti-women policy agenda. Prior to her hearing, Senate Majority Leader Mitch McConnell promised Republican senators would "win," and Kavanaugh would be confirmed. Last week, in Republican Sen. Lindsey Graham's own words, he would "listen to the lady, but we're going to bring this to a close. Sen. Dean Heller called Ford's coming forward a "hiccup" in the confirmation process.

Like so many women, Ford has seen the personal become the political, and watched her own victimhood weaponized against her. And like all women and survivors watching today, Dr. Ford had every right to be furious, to express pure, unadulterated rage or despair. But women are taught early on the consequences of expressions of anger: we're called crazy, or too "emotional" to be trusted, or simply dismissed. And even more dangerous, in Dr. Ford's case, expressions of emotion by women rob them of credibility. When women's words come from a place of emotion, women are immediately dismissed for being too hysterical to be objective. In contrast, when men speak from a place of emotion, they're regarded as real, authentic, and even more believable.

Most striking about Kavanaugh's testimony was the extent to which his rage came from a place of entitlement. There is every possibility in the world that, if he did commit the assaults he's accused of, Kavanaugh is being honest and has little or no memory of them. Not only was he allegedly highly intoxicated, but men — especially white, wealthy men — have long been socialised to believe that how they treat women simply doesn't matter and isn't worth remembering. The vast majority of assaults, after all, are unreported, which means the vast majority of assailants face no consequences. Most perpetrators are repeat offenders — as Kavanaugh is accused of being — and their repeated abuses show they know just how little their treatment of women matters.

Kavanaugh's rage stemmed from a place of entitlement to behave however he wants — he yelled in the faces of elected officials, brazenly calling Senate Judiciary Democrats "you people" — without facing any accountability. This sense of entitlement is so outsized that he seems to believe he is owed a place on the highest court in the land, despite his alleged record of abuse, his proven record of hostility to fundamental human rights, and certainly, the fact that plenty of more qualified judges than him exist.

But arguably, more than anything, his rage stemmed from shock, self-pity, and outrage that women's voices were actually being taken remotely seriously; that a woman could be the reason he doesn't get what he wants.

Kavanaugh's behaviour held up a mirror to societal misogyny, reflecting the double standards that constrain women in the same breath that they empower men. But most telling of all, his anger and profound sense of loss and injustice exposed the abject rarity of women's voices being heard. This one case of Dr. Ford being allowed to testify, to speak up for herself and survivors, and challenge the inevitability of a powerful white man, is being perceived as the ultimate threat to male power and hegemony — not just by Kavanaugh, but the male Republican senators and president who rule the land, and share in his outrage. Part of this anger certainly stems from their awareness that the ground is shifting underneath them — and that women will increasingly stand in the way of abusive men getting what they want.