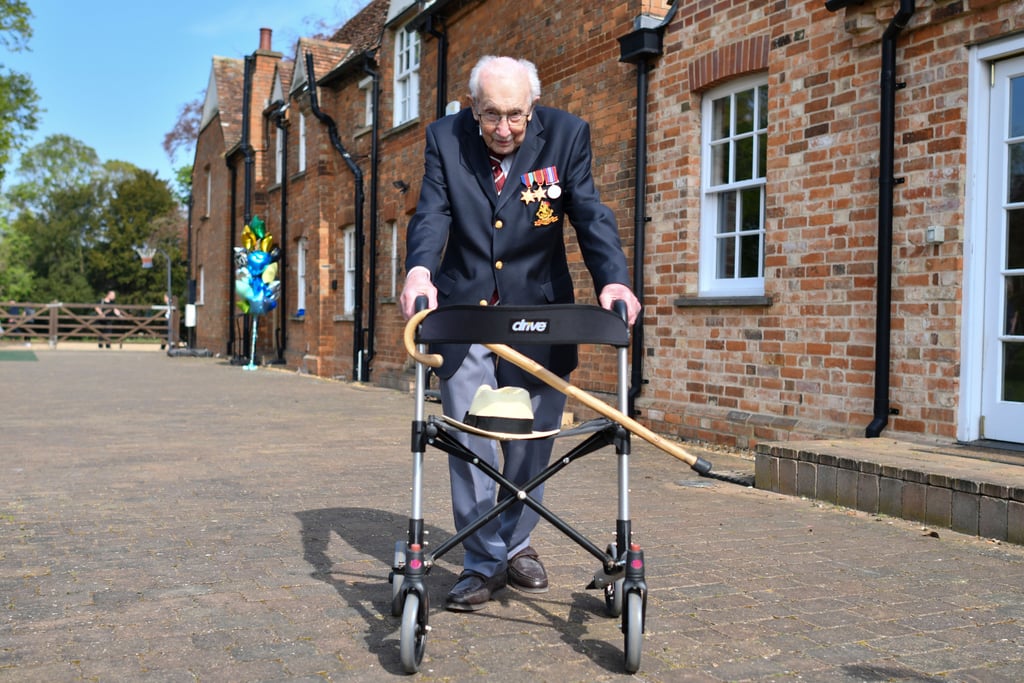 The current COVID-19 pandemic has changed the world as we know it, there's no doubt about that. But while the news can be a really scary place right now, there are little glimpses of light shining through the darkness, and these bright lights deserve our attention. In April, our joy was sparked by WWII veteran Captain Tom Moore, who's casually raised over £30 million for NHS Charities Together, an organisation that's supporting NHS workers, volunteers, and patients impacted by the COVID-19 crisis.

With the help of his daughter Hannah, Tom set up a Just Giving page with the original goal of raising £1,000. Not only that but he challenged himself to walk one hundred lengths of his back garden (which is 25-metres long) before he turns 100-years-old at the end of April.

Appearing on BBC News on 15 April, Tom spoke live from his home in Yorkshire as the official counter went over £5 million, saying "It's completely out of this world, thank you so much to everyone . . . for every penny that we get, they deserve every one of them." At the time of writing this, Tom has raised £30 million (and counting) — it's safe to say he's more than reached his target, and then some.

On Thursday, 16 April, Captain Tom Moore completed his goal of walking 100 lengths of his back garden for his 100th birthday. As he completed the final laps, Tom was surprised with a guard of honour by the 1st Battalion of the Yorkshire Regiment. When asked how he was feeling, Tom told BBC Breakfast, "fine . . . I'm surrounded by the right sort of people, so yes, I feel fine. I hope you're all feeling fine." At that point, he had raised over £12.4 million for NHS Charities Together.

Captain Tom Moore's birthday, on 30 April, started with a flypast Spitfire and Hurricane from the RAF Battle of Britain Memorial Flight, based at RAF Coningsby. Of course, Captain Tom has also received the customary letter from Queen Elizabeth II to celebrate his 100th birthday. He was also promoted to honorary colonel, which was presented to him by Lt Col Thomas Miller at his home in Yorkshire. Captain Tom told the BBC he was "very moved" by the honour. "I really am honoured by that, and although I can't use it in public, it really is something special to be able to say honorary colonel," he said. He was also presented with a replacement Second World War Defence Medal ahead of next week's VE Day 75: The People's Celebration on 8 May, which marks the end of World War II.