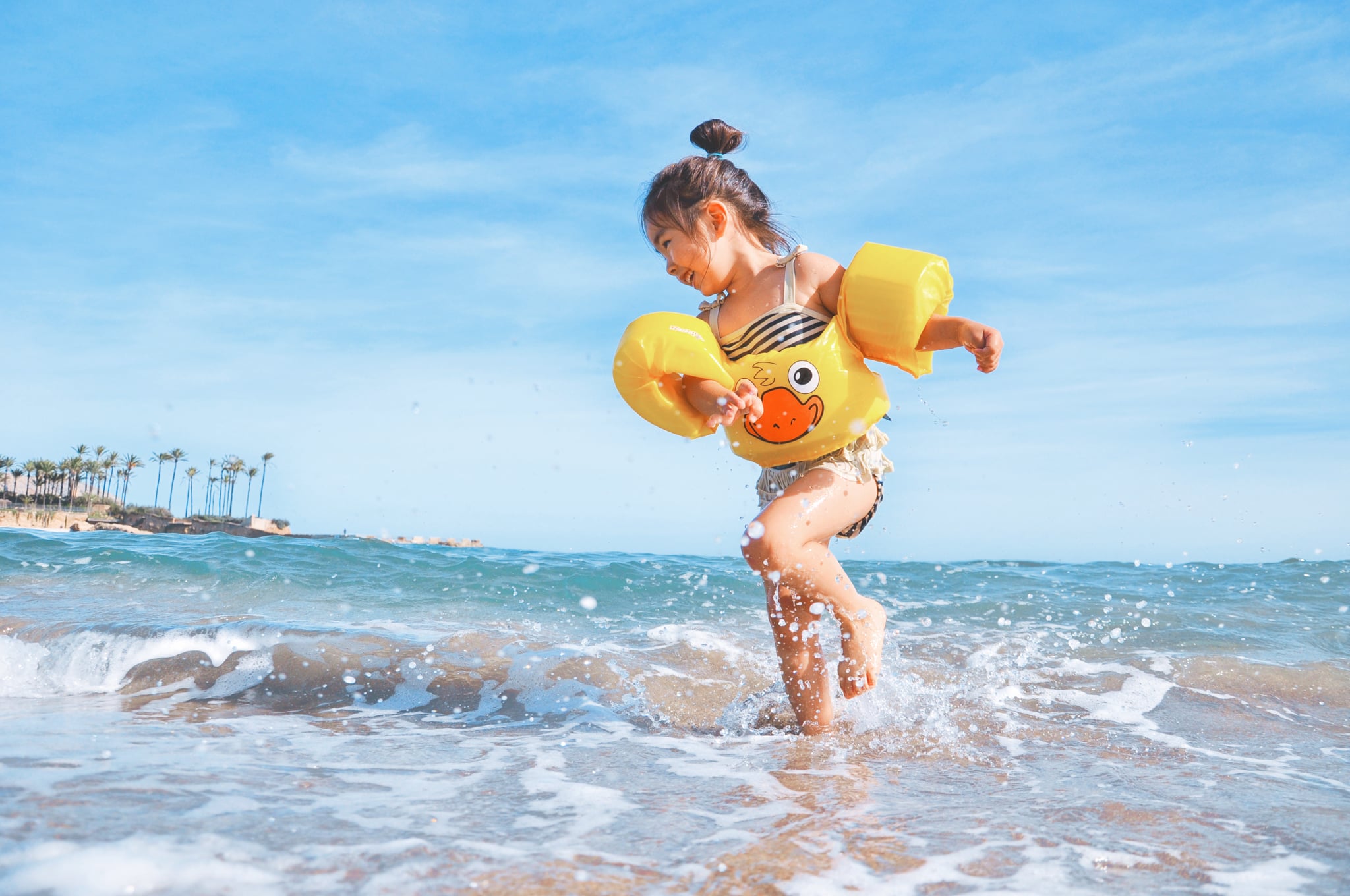 "Your dad would be so proud of you." As I spoke those words, I hadn't expected my eyes to fill with tears. After all, ten years had passed since my husband's death in a freak workplace accident — ten years in which I'd been experiencing the milestones of our daughter's life, from her first ultrasound to this latest one, without him. I thought I'd got used to his absence at these special times.

Once the tears started flooding my eyes, they welled over, streaming down my cheeks. Suddenly, I found it hard to talk. Hard to breathe. Larry should be here for the day our daughter joined the swimming team.

Our ten-year-old daughter is drawn to the water as much as her dad was. Possibly more.

Especially given he had loved to swim — in a pool, in the river, it didn't matter. In fact, when we'd first started dating as young 20-somethings, one of our favourite activities had been heading over to the local small-town hotel and going swimming. Or, rather I should say, one of his favourite activities. I, a non-swimmer, had always agreed to go and ended up enjoying myself because of the company, not the activity.

But, unlike me, our ten-year-old daughter is drawn to the water as much as her dad was. Possibly more. On our first holiday together when MacKenzie was four-months-old, she splashed around my aunt's Floridian pool and loved it. She adored the kiddie pools of her toddler years, but I, the non-swimmer, couldn't be persuaded to take her to the public pool. Swimming had been Larry's love, not mine, so I opted instead for other fun activities, like adventures at the park, the library, and the children's museum.

Related:
I Lost My Husband 3 Days After Welcoming Our First Baby

Except for the brief exception of Parent-Tot swim lessons one Summer month when MacKenzie was four years old, she'd never been to the public pool. Noting her love of the water, however, I'd periodically ask her if she'd like to take swimming lessons. Her dad had completed every level and could have tested to become a lifeguard, if he'd chosen. Surely, he would want our daughter to learn to swim.

Yet, at five, six, and seven years old, MacKenzie said 'no' to swimming lessons, and given she was already involved with dance class and Spanish lessons, I didn't push it. Another trip to Florida changed that. When my daughter was splashing around my aunt's pool for the second time in her life, Aunt Mary looked at her in disbelief. "She's turning eight years old, and she still doesn't know how to swim?" Perhaps my aunt had a point.

Once home, I posed the question to MacKenzie again, this time prefacing it with the obvious. "You love the water. So doesn't it make sense to learn how to swim?" MacKenzie nodded, agreeing. She would take swimming lessons.

As much as she loved the water, that first swimming lesson was an abysmal failure.

Still, given what would be her last dance season was only half-over, six months elapsed before I finally enrolled her in lessons. I'd like to say that, once in the class, MacKenzie took to it like, well, a duck to water, but the opposite proved true. As much as she loved the water, that first session was an abysmal failure. She wouldn't let go of the edge of the pool. She feared jumping in even the shallow end. She shrieked the first time her instructor attempted to have her float on her back. Forget jumping off the diving block. Needless to say, she didn't pass. I enrolled her again. She didn't pass again.

Related:
I Thanked My Mother-in-Law For Raising My Husband Before She Passed Away, and I'm So Grateful

Frustrated to be taking the same class for the third time, MacKenzie wanted to quit. I said no. "Sweetheart, you are your own worst enemy," I gently explained. "Your fear is the only thing holding you back from truly learning to swim." In the back of my mind, too, I harboured the thought that my husband would be disappointed with me if I let our daughter quit.

The third time proved the charm. Perhaps determined to avoid Level 1 for a fourth time, or perhaps finding the courage within herself (or, most likely, both), MacKenzie let go of the wall. She jumped in the shallow end, then the deep end, and finally, off the diving block. She mastered the back float. She conquered her fear. She passed.

And her determination grew. Of the next six levels, MacKenzie never failed again. Somehow, she evolved from being the worst student in the class to the best. At the end of each session, her instructors remarked not only on how far she'd progressed as a swimmer, but also how well-mannered and polite she was, a true role model for her peers. I felt immensely proud, and I knew Larry would, too.

Somehow, she evolved from being the worst student in the class to the best.

Shortly before her tenth birthday, after having passed all seven levels and being strongly encouraged by her instructors, MacKenzie joined the swim team. She couldn't wait! That first practice, I sat on the bleachers, watching her with complete amazement. Despite my encouragement and my resolve to not let her quit, I'd never dreamed MacKenzie would come so far, so quickly. Or that she'd love swimming so much.

Related:
My Father Raised Me Alone After My Mother's Tragic Death

That night after practice, I was in the kitchen, making dinner, when I glanced out the window above the sink into our snow-covered backyard. Suddenly, like an unexpected slap to the face, the truth hit me. My daughter and her father would never share their mutual love of swimming.

"Your dad would be so proud of you."

This milestone meant that Larry would never take MacKenzie swimming at the Y. They'd never race one another in adjoining lanes, like she had with one of her instructors. They'd never splash around on a beach together or swim out to the raft in the middle of the lake. He wouldn't be sitting beside me on the bleachers, watching her practice, or cheering her on at a swim meet.

That realisation hurt. And when MacKenzie wandered into the kitchen a few minutes later, inquiring about dinner, I couldn't resist wrapping my arms around her, murmuring words I knew to be true. "Your dad would be so proud of you."