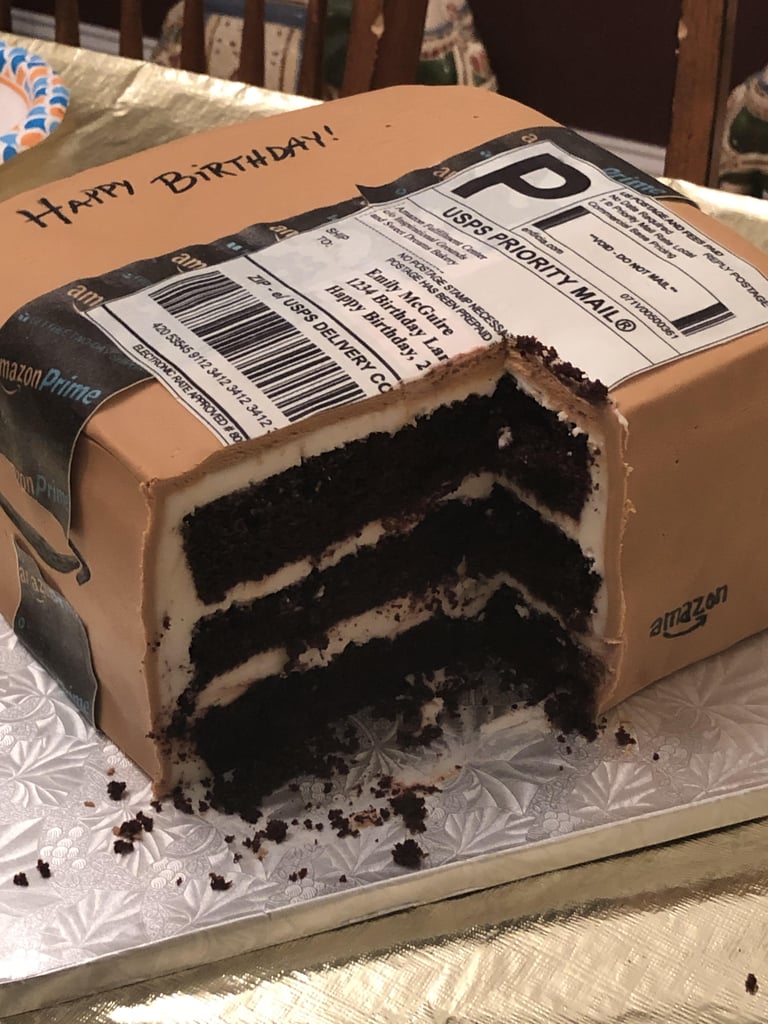 You know you order from Amazon too often when your partner gives you a birthday cake shaped exactly like a giant Amazon package. That's exactly what happened to North Carolina mother of three and photographer Emily McGuire, whose husband, Waylon "Mac" McGuire, decided he'd call out his wife of over 11 year and her love for the delivery service in the funniest and tastiest way possible.

The cake, created by Sweet Dreams Bakery in Dunn, NC, was covered in light brown vanilla fondant to mimic cardboard and topped with edible sugar sheets that looked exactly like a delivery label and Amazon's signature box tape. As for the interior contents of the special delivery? Emily's Amazon "package" was actually a triple-layer chocolate cake covered in buttercream. Yum!

"I laughed so hard when I saw it. I thought it was just a box at first and then realised it was a cake!" Emily told POPSUGAR. Considering the fact that the McGuires receive two to three Amazon packages per week, Emily's husband didn't have too hard of a time deciding on the hilarious birthday cake idea.

"This was certainly a fun cake to do," the co-owner of Sweet Dreams Bakery, Trena Norris, told POPSUGAR via email. "When we received the message from Mac, I was excited because I like to experiment a lot and I knew this one would be fun . . . I'm so thrilled that Emily was happy and enjoyed it."

While Emily isn't the only person whose spouse has given them an Amazon-related surprise, I sure hope she has more Amazon-inspired birthday gifts to look forward to in the future. "I can't wait to see how we're going to top this!" Emily said. Take a closer look at the hilariously realistic cake ahead.