PBS Kids is making television history by creating the first US children's show to feature an indigenous lead character, and your little ones won't want to miss out on all of her action-packed adventures. Molly of Denali, set to debut nationwide on July 15, is meant to help children understand the culture and traditions of Native people through the eyes of 10-year-old Molly Mabray, an Athabascan girl from Qyah, Alaska whose family owns the Denali Trading Post.

All of the show's indigenous characters will be voiced by Native people, including Molly herself, who will be voiced by 14-year-old Sovereign Bill of Auburn, Washington, according to the Associated Press. Each episode will also include a video of real Alaska Native children showcasing their own diverse cultures and languages.

As viewers, children will be able to follow Molly, her Native friend Tooey, her African-American friend Trini, and her dog Suki on their adventures in the fictional community of Qyah, whose residents are both Native and non-Native. The 30-minute show will run during mornings seven days a week and will air 38 half episodes in pairs, according to WGBH executive producer Dorothea Gillim. 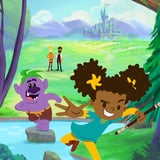 "Molly of Denali showcases values paramount to all Alaskan Native cultures," says Princess Daazhraii Johnson, the show's creative producer. "These values will be woven into each story line and provide important learning moments. I'm especially excited that Alaska Native children will get to see themselves in Molly, who's such an inspiring role model for all kids. The project's Alaska Native advisors worked hard to ensure that our children will get to see our beautiful cultures in a respectful light."