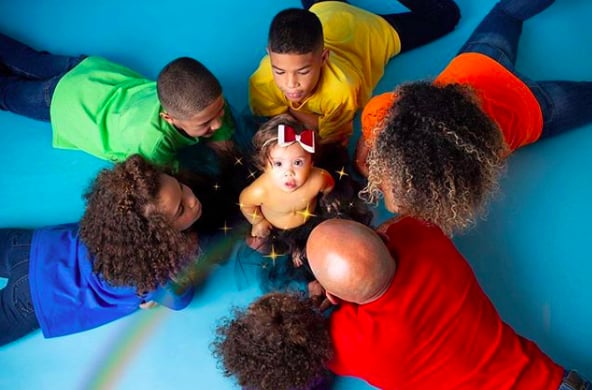 When Texas-based Amber Rojas gave birth to a beautiful baby girl with Down syndrome in July 2018, she immediately knew her daughter Amadeus was a blessing. Unfortunately, Amadeus's doctor — the individual who diagnosed her with Down syndrome — wasn't nearly as enthusiastic or supportive. Rather than letting her resentment fester, the mom of five wrote an open letter to the doctor on Instagram, and her forgiveness is incredibly powerful.

"Dear Doctor, You may not remember me or my daughter but I will never forget you, but I forgive you," she wrote. "You were the one who told me all the things she wouldn't do; but you never told me the things she could. You were the one that told me my daughter couldn't nurse because of her low tone and because of her heart defect, but what you don't know is that she exclusively breastfeed for four solid months. I even had to bring her to work with me because she didn't want anything else."

Although Amadeus was already well on her way to proving people wrong, her doctor was still extremely concerned with her ability to gain weight.

"You were the one that diagnosed her with Failure to Thrive and expressed your concerns of her gaining weight, but what you don't know is that she is now one of the bigger babies in our birth class and in two weeks is turning 1," Amber wrote. "You were the one who made the decision to give her a [nasogastric tube] because of your concerns and her weight gain causing a horrible oral aversion to the point that she couldn't even put her own hands in her mouth."

"You were the one that patted me on the shoulder and told me you were 'sorry!' Sorry that my daughter was diagnosed with T21."

Fortunately, Amadeus overcame the oral aversion and was able to eat on her own. But regardless, Amber admitted the doctor still made her feel guilty about her parenting ability.

She added that one of the most painful memories was when her doctor apologised for her daughter's Down syndrome diagnosis: "You were the one that delivered my daughter's diagnosis. You were the one that patted me on the shoulder and told me you were 'sorry!' Sorry that my daughter was diagnosed with T21, but what you didn't tell me was that her diagnosis and our story would save lives."

Despite the fact that Amber felt unsupported in more than one way, she's opted to forgive her doctor for a simple reason: he or she didn't know her daughter yet.