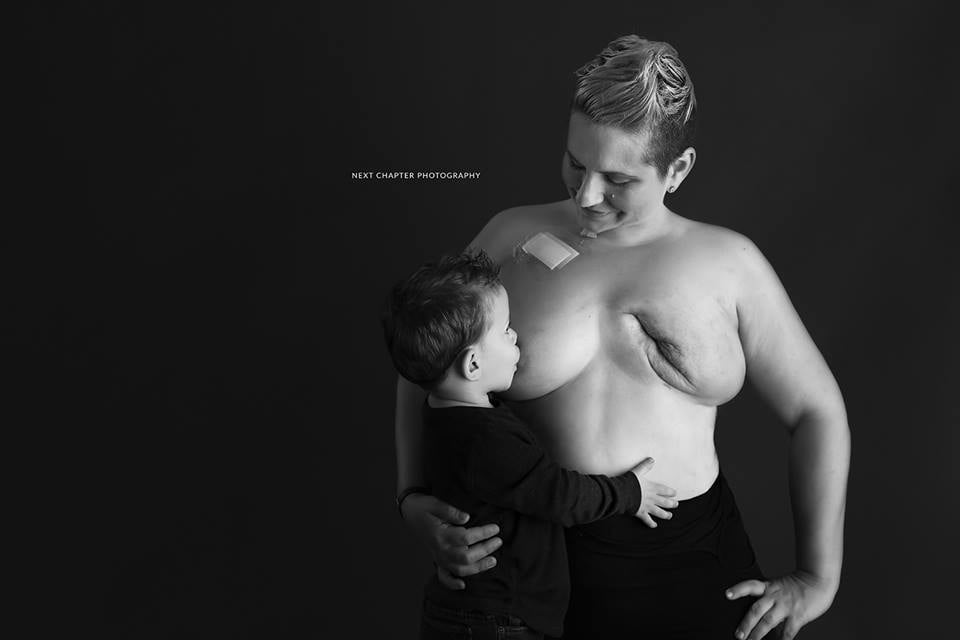 Mirelys Jimenez, a mom of two, wanted to give her 2-year-old son Alex the full breastfeeding experience. However, after being diagnosed with breast cancer when Alex was 22 months old, she had to cut her plan to nurse for two months short to undergo chemotherapy and a mastectomy.

"I had to stop breastfeeding in order to start chemotherapy, and that's the part that hurt the most about cancer treatment. It wasn't the diagnosis or losing my hair twice, or the countless side effects I've experienced; it was abruptly ending that connection with my son that hurt the most," she told POPSUGAR. "A couple of days after surgery, I resumed nursing from the right breast and continued until a week before chemotherapy. My left breast produced milk for the following two and a half to maybe three weeks. I would leak, have letdowns, and was engorged, but since I was still bandaged up and with drains, there was very little that I could do to find relief."

"It wasn't the diagnosis or losing my hair twice, or the countless side effects I've experienced; it was abruptly ending that connection with my son that hurt the most."

On Thanksgiving Day, Mirelys shared an emotional photo of her breastfeeding Alex for the very last time a year ago, and the caption is incredibly powerful: "The hardest part of cancer treatment was having to stop breastfeeding before either of us were ready," she wrote. "One year ago today, on Thanksgiving morning, I nursed my youngest for the last time."

Although Mirelys was prepared to undergo any medical procedure to ensure her children grew up with a mother, weaning Alex proved to be challenging.

"My son and I would bed share, since that's the easiest when nursing," she explained. "During the first few weeks of weaning him, I slept in the guest bedroom, and that was the hardest thing I've ever done. I could hear him crying for me. My husband would hold him until he would fall asleep. He would wake up in the middle of the night looking to nurse or just cuddle with me. Those were the hardest couple of weeks of my life."

All in all, Mirelys had numerous tumors in her breast, which required multiple surgeries, rounds of chemotherapy, and medication. Now, Mirelys is an advocate for self breast exams.

"My journey has been very eventful, to say the least," she said. "If there's one thing I have learned from all of this it's that you have to be your own advocate. If something doesn't sit right, get a second opinion. I have become a huge advocate for self breast exams and metastatic breast cancer research. You are never too young for breast cancer, and cancer doesn't care if you're pregnant or breastfeeding."