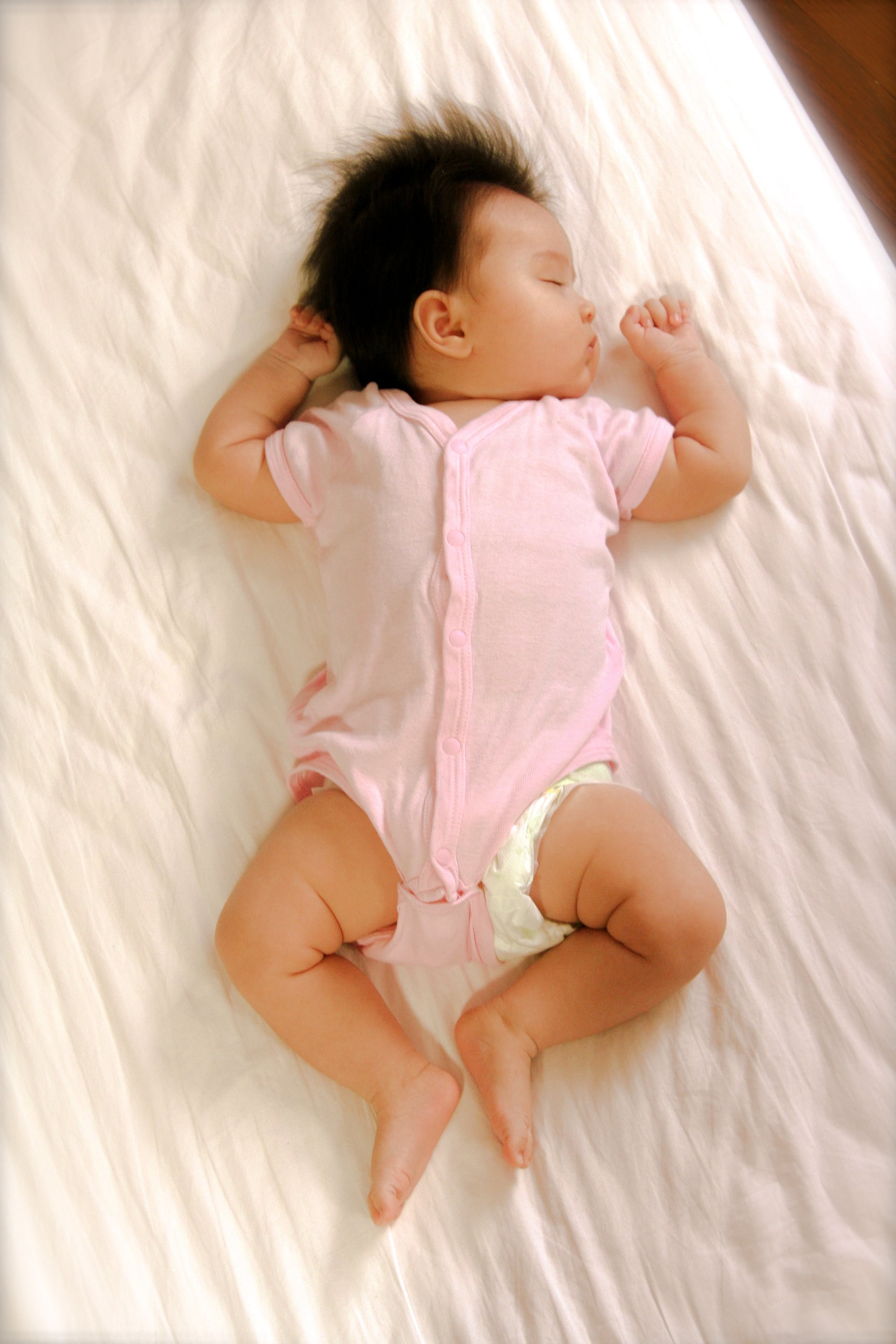 The night I screamed into a pillow, I knew something had to change. My 4-month-old baby had woken up in the night, and I had just spent 30 minutes at 3 in the morning rocking her back to sleep, then carefully, so carefully, placed her back into her bassinet. She had laid there peacefully for about 15 seconds before she woke back up, crying, and I had to start the whole process over again.

Such was my and my husband's life in the fourth month of having our first baby, a sweet daughter whom we had mistakenly called "a good sleeper" in her first month of life. She slept a lot as a newborn, because duh, newborns sleep a lot. There was very little that was special about that, but I still felt lucky when, for the first couple months, I could put her back to bed after waking up to nurse her every couple hours and she'd be right back to sleep. It was fractured sleep for me, since I was breastfeeding, but at least I got to get back in bed afterwards.

Fast forward to that night I screamed into the pillow. The scene I described previously began to define our nights with her: it would take between 15 minutes to an hour to rock her to sleep, then we'd precariously try to put her down into her bassinet without waking her. One step on a squeaky floorboard or a joint that cracked too loudly, and it was all over. Oh, and we did that every time she'd wake up in the night, including after each time she'd nurse. Parenting is just full of surprises!

Related:
Know When It's Time For Bed: Here's How Much Sleep Kids and Babies Need by Age

Then, it actually got worse: One night, we couldn't get her down at all. I called the advice nurse from my pediatrician's office in the middle of the night, who couldn't help but could commiserate, telling me she herself had sat up for hours overnight with her little ones. After tearfully begging for any advice (hello, advice nurse), she instructed me on how to safely co-sleep. I stripped all the bedding and pillows off my bed, sent my husband to the guest room, and laid down next to, but not too close to, my baby. She slept soundly. I didn't sleep at all. Co-sleeping was not going to be our solution. I desperately took her to the doctor the next day, who confirmed that she was fine . . . but was going through the dreaded four-month sleep regression. "It might be time for sleep training," she told me.

Like, "cry it out"? I asked. Yes, she said, then sent me home with my perfectly healthy baby. Her suggestion was the extent of what she told me about sleep training, and in fact, most of my knowledge about it came from an infamous episode of '90s sitcom Mad About You where new parents Paul and Jamie (Paul Reiser and Helen Hunt) sit outside their baby's door, listening to her cry in an effort to teach her to sleep. The little I knew about it in the real world was this: That it was very controversial.

I wondered if I was the kind of mom who could let my baby cry, and what that said about me.

The gist is that once your baby reaches a certain age, you let them cry until they learn how to self-soothe, and thus, put themselves to sleep, and then go back to sleep when they wake up in the night. So why is it so controversial? The crying part. I belong to something of a digital moms' group, in the app I used to track my pregnancy. It grouped me with other mothers whose babies were born in the same month as mine. When we all started hitting the sleep regression, there were a ton of posts discussing what to do, and when a mom would talk about sleep training, there would be a many comments from other moms who'd say they "could never" let their baby cry. I wondered if I was the kind of mom who could let my baby cry, and what that said about me. One thing was for sure: if I could, my online moms' group would judge the hell out of me.

In the throes of agony over what to do, plus the most sleep loss I'd experienced since becoming a mom, I picked up Emily Oster's buzzy book Cribsheet. I'd loved her previous book, Expecting Better, which examined data behind the "rules" of pregnancy, and the way she broke down facts about why some foods are forbidden, or practices pregnant women are told, but never explained. Her no-nonsense style extends to Cribsheet, which examines conventional wisdom about babies and toddlers.

In her chapter about sleep training, I found the guidance I needed. Oster explains the tenets of traditional sleep training (they all involve letting your baby cry, with variable amounts of time for it, and variable practices for checking on them — or not). Most helpfully, she breaks down why sleep training got a bad rap. In 1980s Romania, so many children were abandoned in orphanages that there weren't enough caretakers, and thus, many babies were left in cribs with little to no human contact for years, resulting in developmental delays and an inability to bond with others. This event was equated to the practice of letting your baby cry it out, and a stigma was born.

In her no-judgement, just-facts way, Oster helped me see that sleep training would be truly beneficial for the whole family, and I wouldn't be scarring my child for life.

But as Oster points out, "It is not comparable to the experience of most infants whose parents use the 'cry it out' methods. None of these suggest leaving the infant for months without any human contact, nor do they suggest subjecting children to the other types of physical and emotional abuse common in the Romanian orphanage experience." As is her method, Oster delves into the other data about actual sleep training methods, and she found benefits, pretty much exclusively. These include the conclusions that sleep training improves sleep for the infants (and parents, and anyone else in the home trying to sleep), and the reduction of maternal depression and parental stress. In her no-judgement, just-facts way, Oster helped me see that sleep training would be truly beneficial for the whole family, and I wouldn't be scarring my child for life.

Related:
I Figured Out How to Get My Kids to Bed Without a Fuss — and It's Shockingly Simple

I texted a mom friend whose baby was just a couple months older than mine. "The 4 month sleep regression is killing me! How did you get through it?" It was some kind of parent kismet, because she replied to me listing out everything their baby had gone through. How he stopped being easy to put down. How he slept peacefully in their arms but screamed as soon as they put him down. How naps were a joke. It was exactly what was happening to my baby. She reported that they finally survived by sleep training, and she recommended the book they used, The Happy Sleeper. I downloaded it for my Kindle before I could even send my thank you reply, complete with the prayer-hands emoji.

My husband and I read the book, then on a Friday night, we started the routine. Once we got to the part where she cried, she really leaned into it. She wailed. Our baby, who almost never cried during the day, was sobbing in a way her lungs had never tried. It was heartbreaking, but we followed our instructions to a tee. After an hour of crying and checking in, she stopped. And she went to sleep. And she slept until 3 a.m. or so, when I nursed her and put her back down, with no struggle. The next night she cried for five minutes. The next night, none at all. Now, nearly two months later, my baby sleeps like a champion, all night long, from 7 p.m. to about 7 a.m., occasionally waking one time for a quick feed.

Related:
Why You Should Stop Telling New Moms to Sleep When the Baby Sleeps

My husband and I felt like new people. Not only could we actually sleep, my anxiety around bedtime relaxed. I knew she would go to sleep eventually, even if she had to fuss a little bit. Everything about our evenings became so much more pleasant.

And yet: I felt like my victory was one I had to be quiet about for fear of being judged. I was that mom who let her baby cry herself to sleep. I know those sentiments are misunderstandings about sleep training, which is why I'd like to set the record straight — and shout it from the rooftops: Sleep training is awesome! Sleep training will not harm your baby!

Of course, as with any decision you make for your child, it should be discussed among your family and with your doctor. And every baby is different. You don't have to sleep train, but I do think the benefits of it deserve to be discussed more.

The bottom line is: It worked for me, and I should be able to celebrate that — without any judgement.