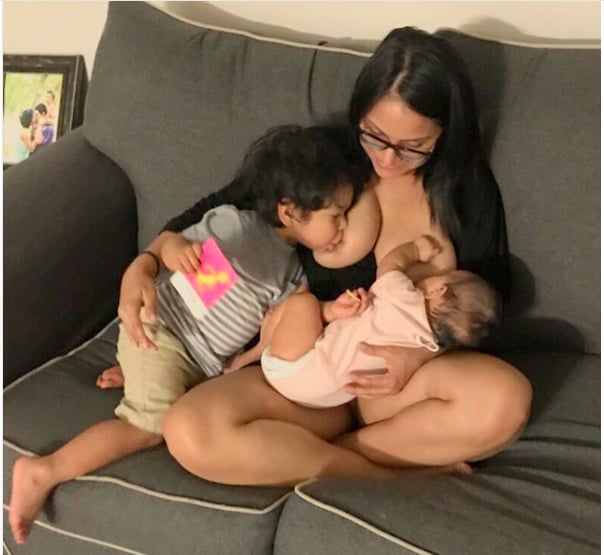 Jessica Parada, a mom of two from Georgia, has never had a problem with being candid about her breastfeeding journey. But after giving birth to her daughter Payton, she's started to notice a double standard regarding nursing. In an Instagram post, Jessica explained that while no one bats an eye when she feeds her 6-month-old Payton, as soon as she mentions breastfeeding her 3-year-old son, Dominic, people's attitudes change.

Jessica told POPSUGAR that she wasn't planning on having Dominic breastfeed for this long — it just sort of happened.

"I thought Dominic would wean toward the end of my pregnancy," she explained. "He hadn't breastfed for almost a week so I thought we were done. Then I had Payton, and he realised that my yummy milk was back — not just a mix of colostrum — and he was so excited to nurse again!"

"I feel the need to say, 'It's only a few times a week. His molars are coming in, and it makes him feel better.'"

Although her friends and family don't openly criticize extended breastfeeding, she admits that she often feels the need to justify her decision.

"No one ever shows signs of disgust toward that statement," said Jessica. "I don't attract those type of people into my life. But I do get this awkward silence sometimes. Then I feel the need to say, 'It's only a few times a week. His molars are coming in, and it makes him feel better.'"

Jessica quickly realised that at the end of the day, she doesn't have to explain her choice to nurse her toddler to anyone — and neither do other moms.

"The thing is, you don't need to justify anything you're doing for your kids," she said. "Do you love them? Do you give them hugs and kisses? Do you say 'good job!' to the smallest of things? Great! Then you, momma, are doing a good job!"

The mom of two hopes that her post can bring more attention to the benefits of extended breastfeeding.

"I feel there isn't a lot of education and awareness about breastfeeding into toddlerhood," said Jessica. "People think that there aren't any benefits, but there are so many! Studies show fewer illnesses, illnesses of shorter duration, a positive correlation between cognition and length of breastfeeding. It's also a great way to soothe Dominic when he's overwhelmed or gets hurt."