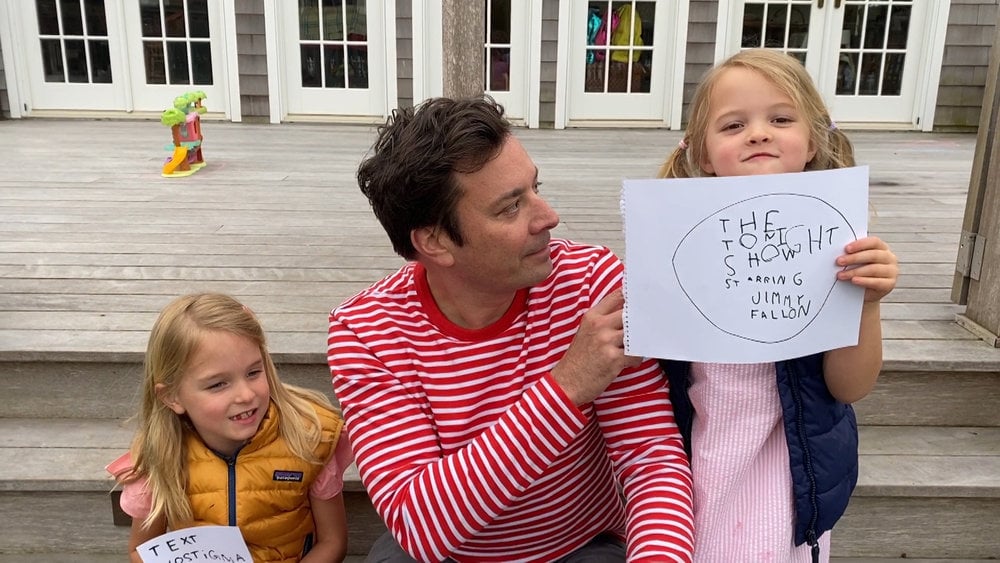 A year after the pandemic began, Jimmy Fallon is sharing what it meant to be able to film The Tonight Show at home with his family, mainly his and Nancy Juvonen's two young daughters, Winnie, 7, and Franny, 6. The late night host released his first at-home episode of the show on March 17, 2020, and continued to film from his house in New York before returning to NBC's 30 Rock studio in July.

In that first episode, Jimmy introduced his family, including their dog, Gary, who was his "first guest," and his wife, who acted as his producer. But his girls immediately become the centre of attention thanks to their constant heckling, interrupting interviews with celebrities like Ethan Hawke and Halle Berry, and various other hilarious incidents (remember when Winnie announced she lost her tooth in front of Ciara and Russell Wilson?!).

"I really bonded with my daughters during that time because I was never normally home that long," he told People. "Usually I'm at work, so I got to really wake up and go to bed with them every single night for months. I think there was a real bond there that we'll never forget."

And it's a time the show's fans likely won't forget either — the at-home episodes were an instant hit. Viewers loved getting a glimpse into Jimmy's home life, but more than that, his show was a bright spot in a very difficult period of time. "Months later we've been getting letters and emails from people, saying, 'Thank you so much for being there' and 'You have no idea, that was our family thing.' To know we were an escape for people is pretty cool."

Related:
If Anything Can Make Jimmy Fallon's Wife Laugh, It's When Their 5-Year-Old Gives Zero Effs

It's clear the late night host is feeling a little nostalgic for those special episodes, which is good news for the show's fans: Jimmy shared he'll be putting out a special anniversary episode of The Tonight Show on March 19. The episode will feature his family and the show is teaming up with State Farm to donate $100,000 to Feeding America. "We're going to give back and it's going to be a good all around feel," he said of the episode.

As we wait for Friday's show, we too, are feeling a little nostalgic for the at-home production and all that Winnie and Franny brought to the table (literally, the family's kitchen table). From reading Everything Is Mama together on Mother's Day to ignoring their dad's jokes (ahem, more than once!), take a walk down memory lane with us and keep scrolling to see a bunch of family photos from Jimmy's at-home episodes.