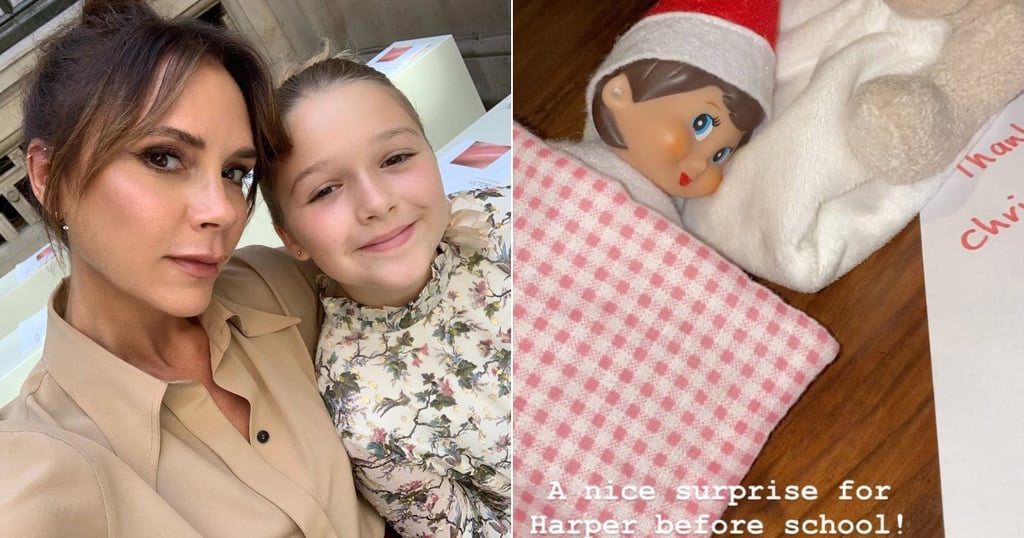 Victoria Beckham, Queen of Instagram, Is Also Bossing the Elf on the Shelf Game For Harper

It feels like every other week we're gushing about how freaking cute the Beckham family is — and we're about to do it yet again, team. Parents all over the country are stashing their Elf on the Shelf toys throughout their houses to give their children a thrill. There are so many ideas out there — from creative hiding spots, to hilarious NSFW gags, and a whole lot of hilarious ideas in between. This week, Victoria Beckham is getting in on the game, sharing a couple of her (honestly, very cute and creative) Elf on the Shelf ideas for daughter Harper. We'll just go ahead and file this under "Family Goals: The Christmas Edition." Beckham shared two photos to her Instagram story this week, showing us exactly where she's putting Harper's Elf on the Shelf this Christmas. In the first photo on Wednesday evening, Beckham posted a photo of Elf "Stuck in a Glass," asking them to please deliver Harper's letter to Father Christmas in the North Pole. The second photo shows the elf having a snooze, all tucked in underneath a miniature pink gingham duvet (which is, not surprisingly, quite chic), with the captions "A nice surprise for Harper before school! X," and "Kisses to Harper from Elf on a [sic] shelf." We can't wait to see what she comes up with next in the lead up to Christmas — check out Beckham's Elf on the Shelf pictures ahead.

Previous Next Start Slideshow
Elf On The ShelfVictoria Beckham

Celebrity Style
She May Be a Fancy Fashion Designer Now, but Victoria Beckham Can Still Conjure Posh Spice
by Kelsey Garcia 1 week ago