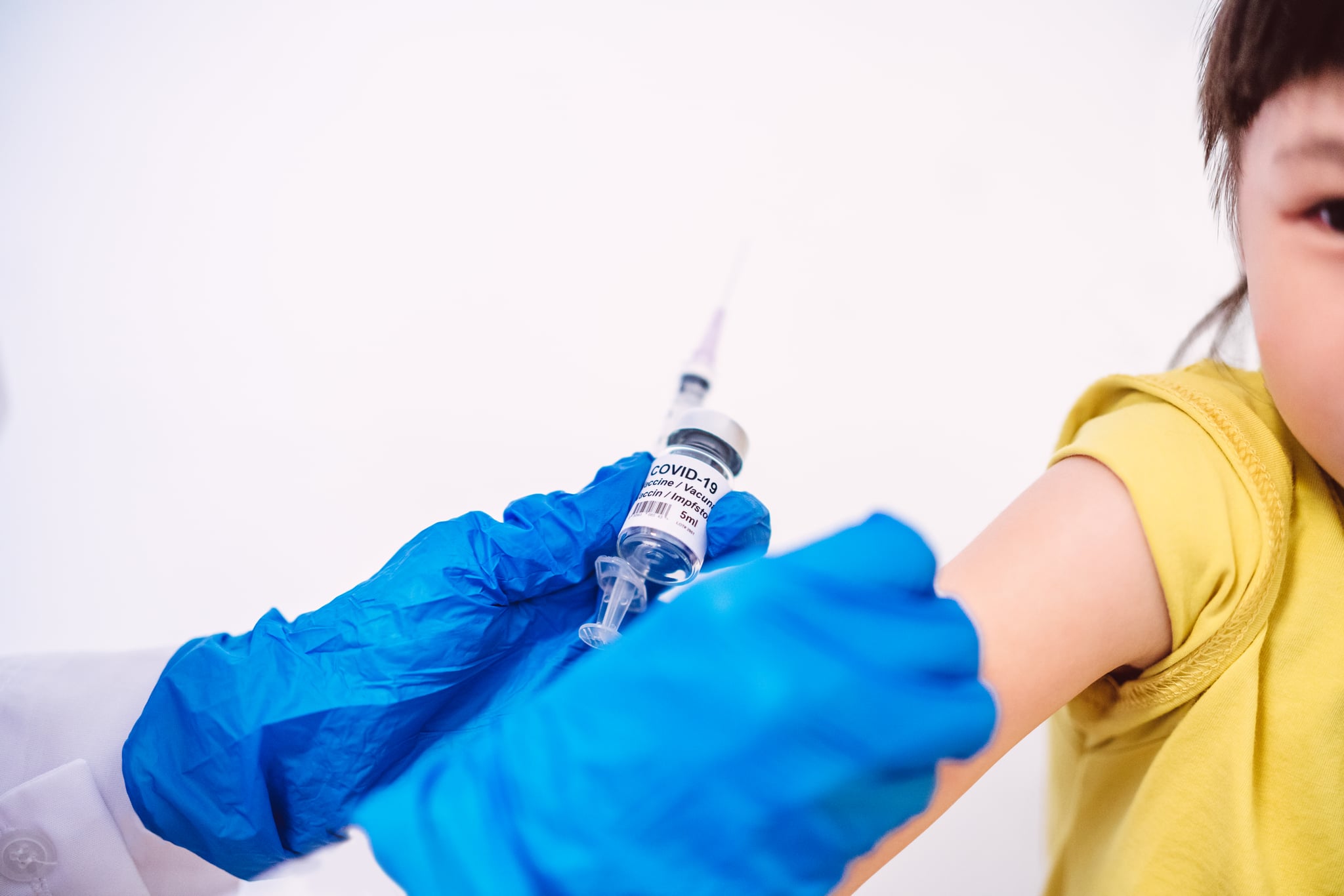 With the entire world anxiously awaiting the end of the COVID-19 pandemic, it is certainly sobering to discover that, based on a recent poll from the Associated Press, only about half of Americans said they would get a vaccine. Roughly 30 percent weren't sure if they'd get vaccinated, and one in five said they'd refuse.

What's more troubling is that parents of young children are among those sceptical of a vaccine for the novel coronavirus. They're fearful that it's too rushed, that to get it within a year would mean it's not safe. They don't want their family to be a "guinea pig," or they don't think it's worthwhile since they aren't high-risk for serious illness. They're "not an anti-vaxxer," they'll preface in message boards, but they are most certainly against this particular vaccine.

"Conspiracy theories about vaccines are at a record high right now. This is where my concern lies — not in the safety of the vaccine."

"Conspiracy theories about vaccines are at a record high right now," Jessica Malaty Rivera, an infectious disease epidemiologist now serving as the science communication lead at the COVID Tracking Project and a member of the COVID-19 Dispersed Volunteer Research Network, told POPSUGAR. "This is where my concern lies — not in the safety of the vaccine," but in the efficacy of a vaccine that so many opt not to take.

"To date, the most effective vaccine we have is the measles vaccine," she said, which is about 98-percent effective. "We'd be lucky if the first approved COVID-19 vaccines were more than 70-percent effective." Combine that with the fact that staggering amounts of science denialism and vaccine hesitancy have a third of people unwilling to take it, and she's not optimistic. "Hypothetically speaking, if only 70 percent of the population get vaccinated with a vaccine that is not more than 70-percent effective, but is also safe, we'll get nowhere near the herd immunity that we need to protect our population. That worries me a lot."

Related:
Experts Explain Why a Vaccine Is the Only Safe Way to Achieve Herd Immunity For COVID-19

Myth: The Vaccine Won't Be Safe Because It Was Made Too Quickly

The belief that the vaccine is being rushed is "a common misconception," Rivera said, that is categorically false.

"For starters, research on coronavirus vaccines had been in progress for years, after SARS and MERS," she said. That research had been paused, but they weren't starting from scratch. "We have legacy here studying the coronavirus family. We know what this virus does, we know how it replicates. We know its mechanism of attaching into cells, so we're not really operating with just seven months of information."

Further, she explained how the US regulatory system is designed to prioritise safety above all else: "When vaccines are in clinical trials, they move forward to the next phase when the goals are met, and in the early cases, the goals are safety and tolerability." If it's causing any "adverse events," then they stop the trial. "Why increase the risk of more adverse events?"

The US is now in Phase III for a handful of candidates, and by this stage, she said, they've already met those goals and are working to show the efficacy of the vaccine. "These studies involve tens of thousands of people in more diverse age groups," she said. And in studying the safety data that has been released so far, she noted the prospective vaccines have only gotten "very mild" reactions.

Unfortunately, thanks in part to a vehemently debunked claim by a discredited doctor that the MMR vaccine had a connection to childhood autism, even news of a "very mild" reaction leads some to believe there's a sizable risk to the vaccine when there is not.

"Transparency's really important," Rivera said. "Adverse events happen, but they are incredibly, incredibly rare. They are not even considered statistically significant when you consider the proportion of people who are vaccinated with no outcomes compared to the rare instances when it does. There are zero things in this world that involve zero risk, however the data is overwhelming to show that they're safe and effective, and they've only gotten safer and more effective over time."

Myth: My Kids Will Just Be Experimental Test Subjects

With most emerging vaccines, they are distributed based on need.

"Personally, I don't think that children would be on the top of the list because of the clinical data that suggests they are not experiencing the worst outcomes, statistically speaking," she said.

"There are zero things in this world that involve zero risk, however the data is overwhelming to show that they're safe and effective, and they've only gotten safer and more effective over time."

Instead, she predicts the vaccine will go first to those who are most at risk of exposure or suffering complications due to COVID-19. "It will go to frontline workers and healthcare workers. They'll want to then give it to people who are older, people who are average adults who seem to be succumbing most to the disease, and then they'll move from there to other high-risk categories based on age and other demographics."

Another reason parents could expect to be eligible for a vaccine before their children is that "vaccine trials are designed to focus on healthy adults first, because that's the majority of people," Rivera said. "They want to make sure that it's the most tolerable, the most effective there, and then work their way out in concentric circles."

Myth: It's Too Risky to Take My Child to Get Any Vaccines Right Now

Despite the best efforts of the Centres For Disease Control (CDC) and Prevention and the American Academy of Pediatrics, the US saw the childhood vaccine rate plummet since the pandemic began in March. Routine vaccines help protect children from 16 serious diseases, but in some communities, there was upwards of a 60-percent decline in them being administered. According to the CDC, among 5-month-old babies, up-to-date status declined from approximately two-thirds of children in recent years to fewer than half as of May.

"Please do not lapse on vaccines," Rivera implored, noting that doctors' offices are taking appropriate measures to keep everyone safe and that the vaccine schedule was specifically designed to prevent outbreaks. "If we have a measles outbreak in tandem with COVID, absolutely it's going to be a disaster."

Related:
Doctor Appointments Amid Coronavirus: Should You Delay Your Child's Vaccines?

Myth: Flu Vaccines Don't Even Work, So This Won't, Either

Short answer: they do.

"To be at risk of flu and COVID during flu season is a nightmare," Rivera said. "If you can reduce your risk at all, reduce your risk. Get the flu vaccine. It will likely protect you from some strain, and if it doesn't and you still get the flu, you will be a lot better for it. You won't be severely sick and you'll recover much more quickly."

And to those who think COVID-19 will be just another flu-type illness we'll have to deal with for years to come, Rivera notes a promising point of difference.

"Influenza has eight strands of genetic material inside the cell, which means that the possibility of combining mutations is much greater because there's all these combinations — the possibility for mutation is large," she said, noting why flu vaccines aren't seen as being as effective as others. "COVID has one single strand of RNA, which means its likelihood for mutation is much less and it's much, much slower, so we don't anticipate that it's going to outpace vaccine development and we don't even anticipate it mutating to some unrecognisable, mutant, crazy strain. We can't predict, but we don't anticipate. That is good news."

Myth: I'm Better Off Getting Immunity by Having My Family Contract COVID-19

The infamous "chicken pox parties" of decades' past, in which parents would purposefully expose their child to another kid with chicken pox in order to contract it and thus develop immunity, has been thrown about as a possibility for families amid the coronavirus outbreak.

"There's no way to completely target one group and hope that they just get it and deal with it."

"The reason why the chicken pox method worked is because most of the parents had chicken pox in their childhood, so [children] wouldn't come back and bring it to their parents," she said, noting that even then, if there was an older person in that house, they were at a high risk of shingles. "There's no way to completely target one group and hope that they just get it and deal with it."

She pointed to Sweden's approach to COVID-19 as a perfect example for how this philosophy doesn't work. "When you say, 'Let's just try to get to herd immunity with everybody walking about. Keep the old people home!' . . . Those people walking about went home and visited and hung out with old people and all the old people died."

Nor do their parents. Rivera noted that COVID-19 isn't the only public health crisis we're facing — that the misinformation that leads to people opting out of safe vaccines is a health crisis as well. "There is a type of person who just categorically denies the efficacy of vaccines or the efficacy of this potential vaccine, and they are adding to the fire."