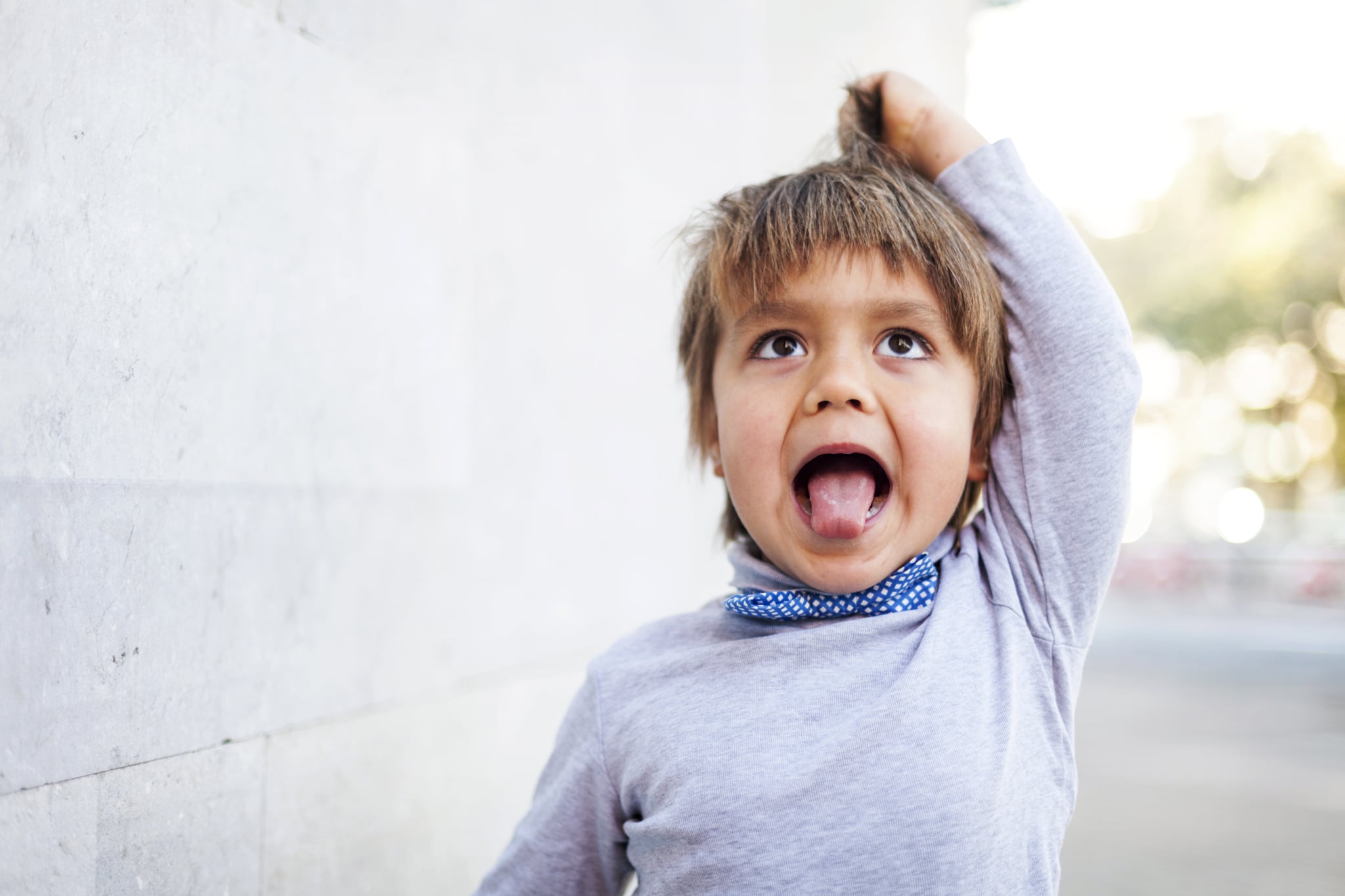 When my 2-year-old gets frustrated, mad at his older brother, sleepy, bored, or lost in the wonder that is TV, I often catch him pulling his hair. It's not too long — he's had a couple masked haircuts during the pandemic — but it has just enough length to be gripped, tugged, and twirled by his little fingers. When I don't catch him in the act, I see the evidence in the form of spaghetti sauce, Play-Doh, and mud wound through his blonde hair. I've tried telling him to stop. I've tried gently moving his hands away from his hair. I've tried putting gel in his hair and combing it off his forehead. Nothing seems to help. Although he isn't pulling hard enough to remove any hairs from his head, I still worry that this behaviour could cause hair loss or could be hurting him. Pediatricians and child psychologists spoke with POPSUGAR to give more insight into this toddler behaviour and tips on what parents can do about it.

Why Does My Toddler Pull Their Hair?

Toddlers are all different, so the reasons they pull their hair differs too. "Many times, toddlers and children pull their hair as they are becoming sleepy or when they are fussy or in a bad mood. Sometimes, they will pull at their hair when they are waking up in the morning. Sometimes, it coincides with when they need to be soothed or calmed down," said Anna Chacon, MD, FAAD, board-certified dermatologist based in South Florida and expert medical writer for ZELENLife.com. It can also be caused by anxiety, as Lucia Wallis Smith, LPC, NCC, CCAT, a psychotherapist who specialises in the treatment of anxiety, saw with her own daughter following a move to a new area and a new school where she was bullied.

Sometimes, even, kids pull hair just because it's fun or is satisfying. "If you're not seeing significant signs of stress surrounding the hair pulling, they're probably just doing it because it feels good," said Leigh Ellen Watts Magness, LCSW, R-PT, licenced clinical social work and registered play therapist based in Georgia. "Some bodies require more sensory input than others, even from infancy."

For us, I've noticed my son pulls his hair equally when he is happily watching TV or when he is throwing a tantrum.

Can Hair-Pulling Harm My Child's Hair or Scalp?

Hair pulling is one of those things where a little won't hurt, but a lot could cause damage. "Hair pulling is a problem when it becomes pathologic," Dr. Chacon told POPSUGAR. "We are all born with a certain number of hair follicles on our head, about 100,000 hair follicles. When we pull at our hair, it causes trauma and sometimes scars the hair follicle itself. In addition, hair takes a very long time to grow. If the hair is pulled out eventually in an area, it will take many months to grow back and will appear as a patch of hair loss."

Keep an eye on if your child is regularly removing hairs from their head — that could be a sign of a larger problem, like trichotillomania, autism, or something more serious. If you become concerned, make notes of when, where, and how long they pull their hair, but remember that hair pulling on its own is rarely a sign of something more serious, said Amy Nasamran, PhD, licenced child psychologist and founder of Atlas Psychology. However, if your toddler is pulling hair from several places, such as eyebrows, eyelashes, limbs, and/or head, it may be worth consulting with your pediatrician or a child psychologist.

Related:
6 Steps to Helping Your Child Manage Their Emotions in a Healthy Way

How Can I Get My Child to Stop Pulling on Their Hair?

First, try not to scold your child, embarrass them, or make it a big deal. Instead, find other alternative strategies for sensory stimulation. Try distraction or redirection, by giving your toddler a warm bath to relax them and relieve stress, teaching them deep-breathing techniques, giving them a fidget toy or a doll with hair, encourageing them to exercise, keeping hair short, or having them wear a tight-fitting hat. Interventions are also available, Smith said, including cognitive behavioural therapy (CBT), habit reversal training (HRT), or medication for depression or anxiety when they are older.

For Smith, she was able to get her daughter to stop pulling her hair with communication and intervention, and now she has a rich head of healthy hair. "In our experience, it worked to replace the hair pulling with another activity, such as using a fidget or stress ball," she said. "We also discussed the hair pulling with our daughter without shaming her — just labelling it a habit she could replace with something that would still be calming and wouldn't changer her appearance so drastically."

Remember that if hair pulling happens during tantrums, giving it too much attention can increase the behaviour. "Instead teach a healthier coping skill, like taking a break or going outside for deep breaths. Then reward your toddler for making choices other than hair pulling when they're frustrated," said Dr. Nasamran.

For the most part, letting my toddler play with blankets and squishy toys has helped lessen his hair pulling. It's a work-in-progress, but I'm trying to find other ways for him to meet those sensory needs and relieve anxiety throughout the day. Hopefully, this will teach him some valuable lessons and coping skills that will last much longer than this hair-pulling phase!