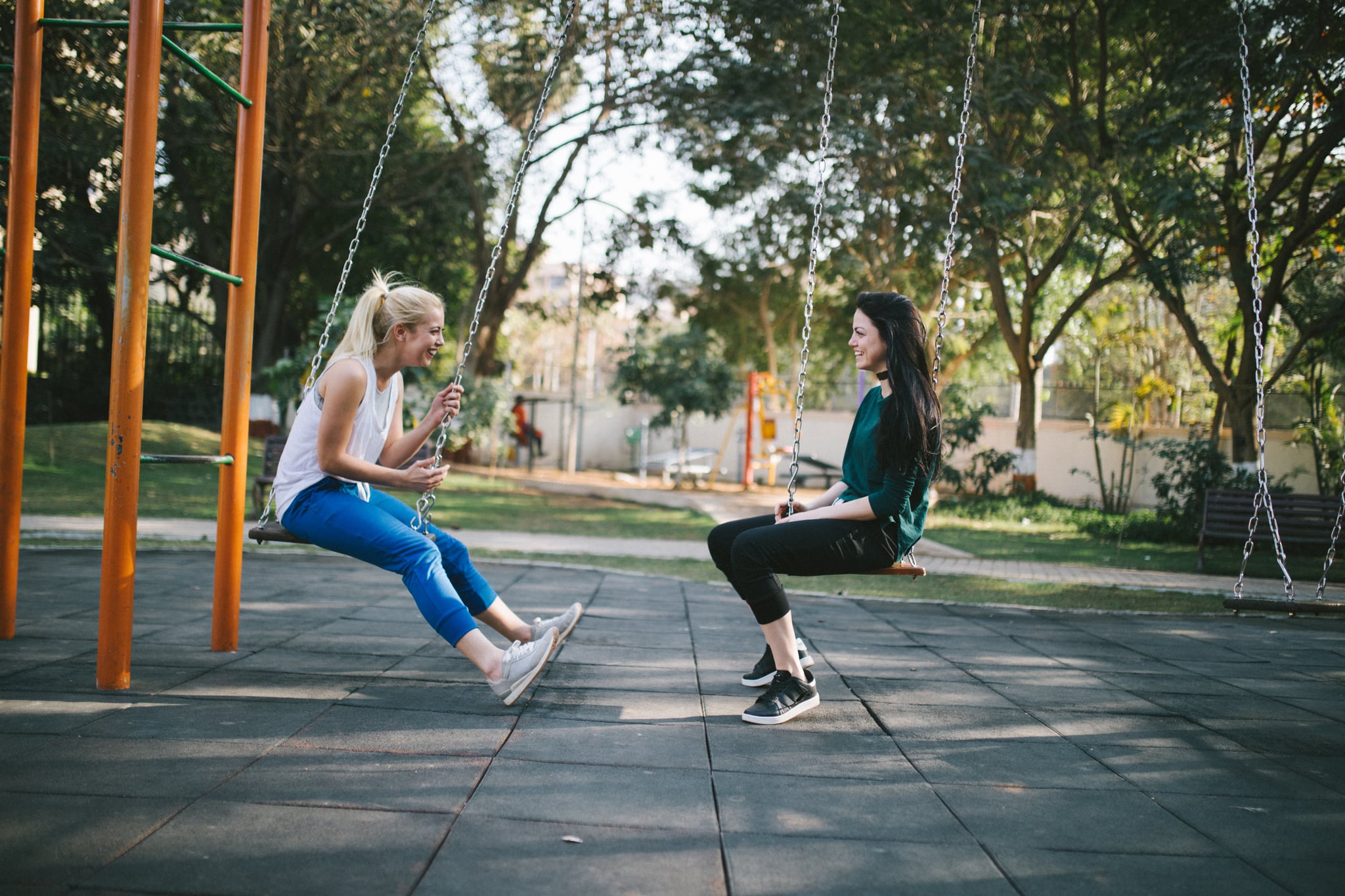 But, once I embarked on that trip, I realised that none of us knew just how much things would change. In some ways, it felt like I'd gotten a one-way ticket, which, on some level I quite literally did. Because I'd been living in a 600-square-foot studio in Brooklyn at the time I found out I was pregnant, my husband and I decided to move to a more family-friendly city and set down roots in Chicago when I was seven months along.

As I speedily approached new motherhood, I was certain I'd need my friends more than ever.

And as I speedily approached new motherhood, I was certain I'd need my friends more than ever. I hadn't made many new ones, save for a few fellow moms-to-be at birthing classes. And the handful of "mom friends" I did collect couldn't even compare to the longstanding relationships I'd cherished throughout my formative years – the ones that helped me through breakups, the ones who cheered me on before job interviews, the ones who celebrated my successes, and the ones who dropped everything to grab a drink and talk through my failures. The ones who were always there.

What would happen, though, once my baby arrived? I was much less certain of whether my friends would still be there for me when I needed them then.

But, after I gave birth, the exact opposite happened. I stopped being there for them. Without even realising it, I up and ghosted my non-parent friends.

Looking back, it's easy to see how I did it.

I started out with the best of intentions. During my maternity leave, I'd call to discuss the TV show I'd successfully binged. I'd include them on family emails whereby I sent a healthy stream of cute baby photos. I'd text them hilarious discoveries about finally having big boobs.

The only thing was, it was impossible to connect. I was wide awake at 3 a.m. while they were sleeping, and I was avoiding laundry and dishes during the day while they were working. Whenever a friend would FaceTime, it was inevitably four minutes after my husband walked in the door or 45 minutes into the pre-bedtime witching hour or the moment I was finally about to step into the shower. I slept through scheduled phone dates and had to take rainchecks when my baby was too fussy for me to pay attention to anything more than every fifth word they said.

Meanwhile, those mom friends I barely knew had quickly become a powerful support network – one that was able to successfully carry on a lively 3 a.m. text conversation about lazy latches or a middle-of-the-afternoon debate over which carrier to get once we outgrew the Solly wrap.

By the time I was back to work, my non-parent friends and I finally abided by a similar schedule, but my waking hours were stretched thinner than my capacity to form sentences. The only engagement I could muster with the outside world was sharing links to funny memes and interesting articles. And, well, the memes I discovered were only funny to my fellow parents, and the articles I read were only interesting to them, too.

I ended up losing a few friends ever so quietly. No epic blowout screaming matches – just the gentle dissolving that transpires when you lose points of connection.

As the months passed and I returned to having a semblance of a fully-functioning life, the ghosting continued. Sure, the fact that I'd moved halfway across the country from most of my non-parent friends didn't help, but I imagine that even if they were down the block, I wouldn't have included them. I'd have said to myself, "Of course they wouldn't want to meet for breakfast before 9 a.m.!" or "They'd think this mommy-and-me yoga class was lame!" or "They do not want to get drinks with a bunch of women talking about mastitis and feeding schedules!"

And what was once subconscious became more intentional. Whenever I felt low, I assumed my non-parent friends wouldn't be able to empathize. Even when it was to do with something with which they could fully relate – like an ugly argument with my partner or a frustrating work assignment – it just felt easier to phone a mom friend.

When I finally realised that my pre-baby life didn't exist – I was literally living an entirely different life in a different city with different people — the damage had been done. I ended up losing a few friends ever so quietly. No epic blowout screaming matches – just the gentle dissolving that transpires when you lose proximity and points of connection.

For the friendships that did survive, I was beyond grateful. Because once the postpartum haze dissipates, all you want to do is shoot the shit with someone who doesn't have a clue about key developmental milestones for 18-month-olds.

Related:
In My House, Every Night Is Date Night, And It's Easier to Do Than You'd Think

I was determined to no longer take my non-parent friends for granted. It took work, but I put myself out there in ways I had previously retreated. It started with small gestures. I commented on more Instagram posts and Facebook status updates. I answered more phone calls. I left more voicemails. Eventually, I planned more visits.

Soon, I was pregnant with my second baby. And once again, because many of my dearest friends were still not planning their entrance into parenthood, I found myself sitting them down to tell them about another "far-off trip" my husband and I were planning to take. But this time, I knew better. I made sure that even if they couldn't snag a seat on the flight, they'd be along for the ride. Somehow.

For many reasons, second babies serve as second chances, and the relationships I had with my non-parent friends were no exception. I learned that putting energy into them – even when I had no energy to spare – was a form of self-care for my future. Because now, with that second baby already three years old, I'm more than just a mom. And I need more than just a mom friend, too.