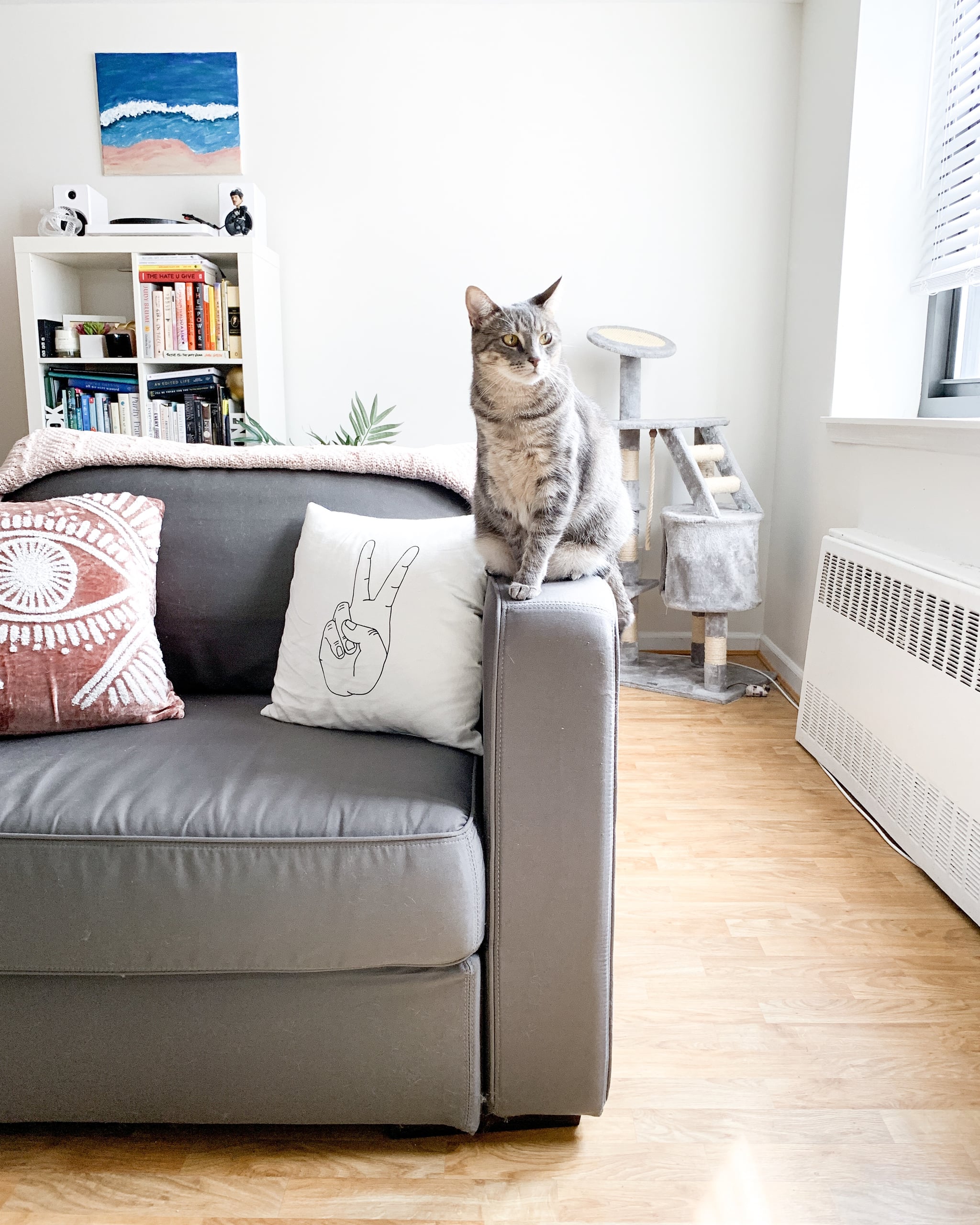 Despite the anxiety, worry, sadness, despair, and [insert most other negative feelings here] that flowed through me in the first few weeks of staying home, another small thought crept up through my brain fog: how were my two cats going to handle us all being crammed into our tiny apartment 24/7?

My and my fiancé's 3-year-old cats, Grey and Swayze, are sisters, but they couldn't be more different. Where Swayze is needy, snuggly, affectionate, and warm, Grey is typically standoffish, moody, has major resting b*tch face, and lets out a crotchety meow when she wants something (read: food). She doesn't spend time with us when we're hanging out on the couch like her sister does, she doesn't snuggle up to us during the day as we work from home, and she certainly doesn't lay on our chests to purr, sleep, and get pets, which is Swayze's number one M.O.

Related:
Why I'm Glad I Adopted 2 Cats at the Same Time

So once we hunkered down to stay home for the foreseeable future, I was worried that Grey would become hostile. She doesn't love being picked up or getting pet, even just for a few seconds, and because I knew Swayze would thrive in an environment in which we never left her alone, I thought that'd set off Grey even more. As a pet owner who definitely seeks my cats' attention because their cuteness overwhelms me, I normally take Grey's disposition more personally than I should (I can't help it, I just want to be loved!), so the thought of her hating us constantly being in her space, making noise, and never giving her time to just exist alone crushed me.

I was, thank goodness, completely wrong about everything.

In the last six weeks Grey has turned into a different cat — OK, she still has insane RBF and doesn't really love to be touched without offering herself up for pets first, but her demeanour has noticeably changed. Now, when my fiancé drinks his morning coffee on the couch, Grey will curl up next to him for her morning nap, rather than taking it in the bedroom away from the rest of us. When I approach her with teeth gritted in cute aggression, she lets me pet her for more than two seconds and might even roll over a bit so I can rub her belly. At night, when we watch TV, Grey will wedge herself between the two of us, and I've never been more OK with someone being a blanket hog. Generally, she's a friendlier and more content cat than she has ever been before.

Related:
A Man Filed an HR Complaint Against His Cat While Working From Home — and It Rings So True

I feel bad that I assumed Grey would handle this poorly — I've always joked that she hates people and merely tolerates her cat sister, and this felt like taking judgement to another level — but really, I was more worried than anything that the delicate ecosystem of our home would be disrupted beyond repair during this time. I imagined the girls fighting over territory or Grey scratching one of us because we were sitting in her usual 2 p.m. nap spot on the couch.

With everything going on in the world right now, we're celebrating little victories in our home more and more. I put a bra on once this week? Win! My fiancé put pants on for the first time in three weeks? Major win! Our adorable cat who is usually so grouchy we can't help but take it personally has decided after three years to finally love on us? Possibly the sweetest win of all. 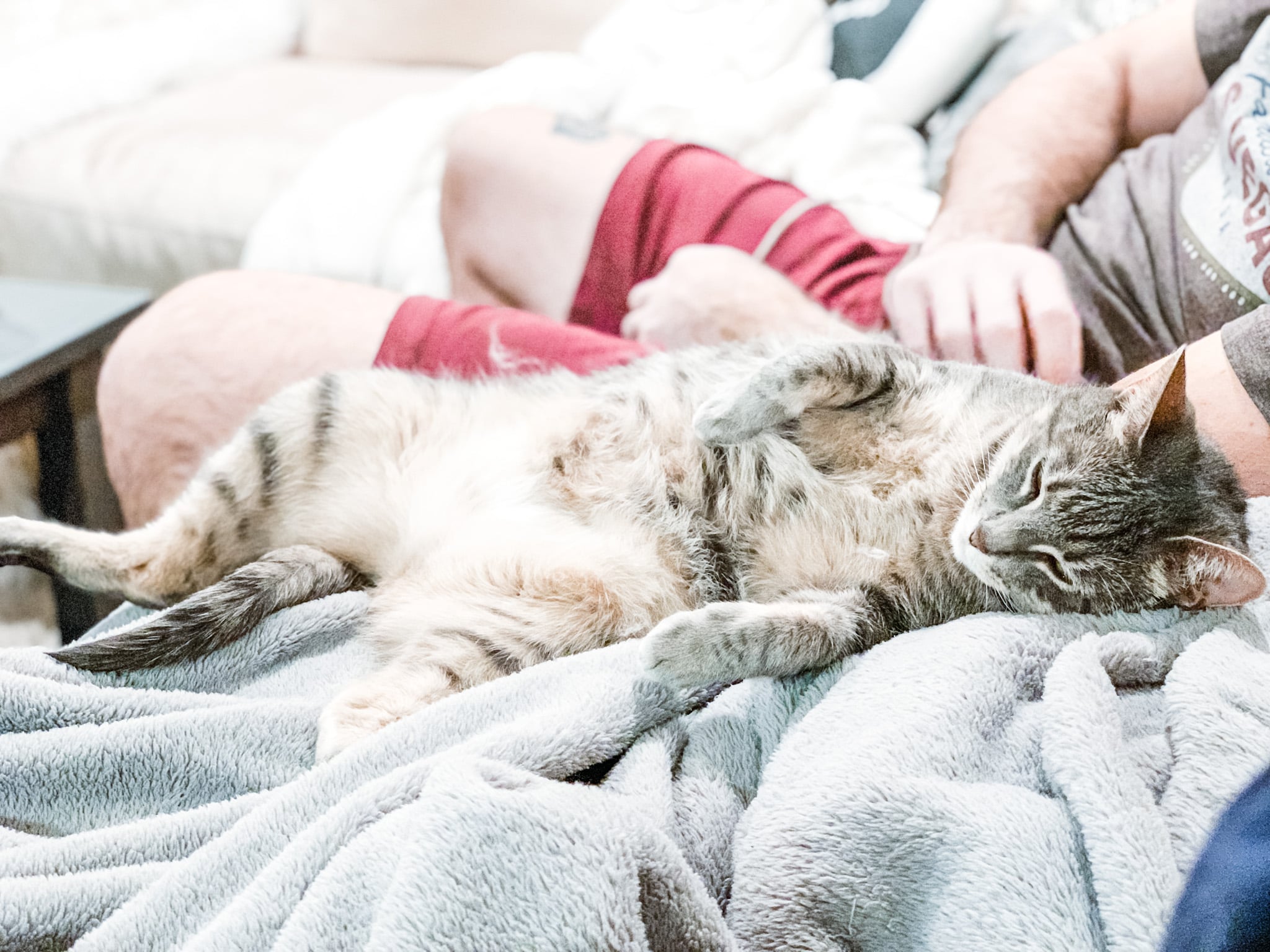