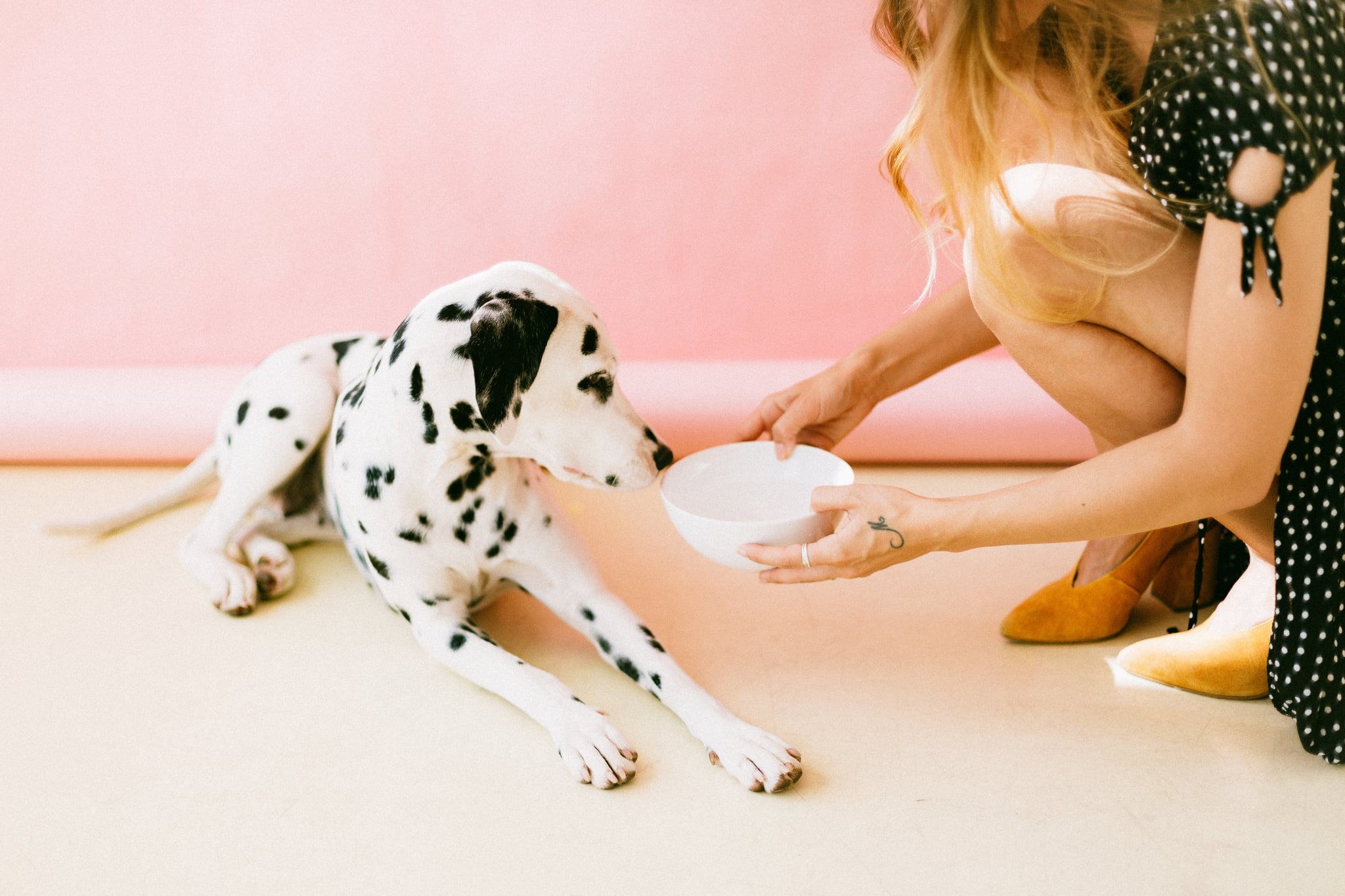 It's a scenario that's all too familiar to so many dog owners: you return from a long walk with your dog, let them in the house, and as soon as you remove their leash, they head straight for the water bowl. They slurp up the water until it's nearly empty, as drool and water drips from the corners of their mouth. Finally, they stop to catch their breath, panting. And seconds later, you watch your dog throw up the water they just drank all over the floor. If this has turned into a frequent occurrence for your dog, it's time to start paying closer attention to their drinking habits. While throwing up after drinking water is common dog behaviour, according to veterinarians Pete Wedderburn, DVM of BrayVet Hospital and Lindsay Butzer, DVM of Clint Moore Animal Hospital, it could also be a sign of an underlying health issue. If you're concerned about why your dog might be doing this, read on to learn more.

Related:
Why You Should Keep Poinsettia From Pets — and What to Do if Your Dog or Cat Eats It

Is your dog vomiting, or are they regurgitating?

For dogs, vomiting and regurgitating are two entirely different bodily functions, due to their anatomy. Dogs can't control when they vomit, but they can control when they regurgitate. Unlike humans, as Dr. Wedderburn explains, "Dogs actually have a voluntary muscle in their esophagus in their gullet. Most of the muscles inside us are automatic, but one of the exceptions is the muscle of the esophagus of a dog. This means that dogs can decide, 'I'm going to regurgitate my food,' and they can do so very easily." While regurgitation occurs when a dog empties the contents of their esophagus after not swallowing properly, vomiting occurs when a dog empties the contents of their stomach after not digesting properly.

Why do dogs throw up so often?

Throwing up is one of the most common reasons dogs visit to the veterinarian, but in most cases, it's nothing to worry about. According to Dr. Wedderburn, "Dogs have evolved as scavengers, and what that means is they've evolved to be very quick to eat something that they find." That includes water. If a very thirsty dog returns from a long walk and eagerly gulps down a ton of water, their stomach will fill up faster than their system can handle. Ice cold water especially increases the likelihood of their stomach contracting, which of course leads to throwing up. "What happens then is, their body automatically assesses what's landed in their stomach and makes a decision as to whether that's good or bad," Dr. Wedderburn explains. "Dogs are quick to vomit compared to some other species, so we wouldn't worry quite so much about dogs vomiting compared to perhaps another species of animals." Still, throwing up can mean other serious issues, as Dr. Butzer goes on to inform us.

Is your dog one of the breeds that's prone to digestive issues?

Dr. Butzer says that certain breeds, particularly schnauzers, have naturally sensitive stomachs. "Same goes for frenchies, or pugs, or any of the smushed-face breeds," she adds. If the water that your dog is throwing up has a yellow or green tinge, it's a telltale sign that their digestive tract isn't working at its best. The yellowish colour comes from bile, the substance that breaks down food in the small intestine, and while it's not ideal for a dog to vomit bile, it happens regularly in dogs with naturally sensitive stomachs. However, if your dog is not a breed with a naturally sensitive stomach, and the water they're throwing up is clear, not yellow, this could instead indicate a thyroid issue or a kidney issue, both of which lead to excessive water consumption and vomiting. Consult your vet immediately if this is the case. "They'll need to do certain tests to rule out some of the serious causes of vomiting," Dr. Wedderburn explains. "A blood test will tell them about your dog's level of hydration, as well as some things like whether their internal organs are working properly."

Are there any medications that help?

If you're unable to bring your dog to the veterinarian right away, there is one over-the-counter medication that Dr. Butzer highly recommends. "It's called Pepsid, and it is an antacid that is used to help settle your dog's stomach to stop the vomiting at home," she says. Although Pepsid, also known as Famotidine, is a pharmaceutical drug for humans, Dr. Butzer confirms that is perfectly safe for dogs, but you should consult you own vet before starting any treatment. "It's an oral pill, so put it in their food, peanut butter, or something they like," Dr. Butzer directs. "You're most likely going to have to cut it if you don't have the right dose — and call your vet to get the right dose. Normally, this is given about four days, once a day, so if your dog is still vomiting after four days, definitely call your veterinarian and make an appointment."

Are you keeping your dog hydrated?

Once you've determined why your dog is throwing up water, you must also make sure they're drinking enough of it. It might seem ironic, but after dogs throw up their water, they don't have enough of it in their system as a result. This inevitably leads to dehydration, which can turn into a serious health issue if ignored. Always pay attention to your dog's drinking habits, whether it's changing their water frequently, under-filling their bowl to avoid quick consumption, and of course seeking veterinary help if you think there's a bigger issue.