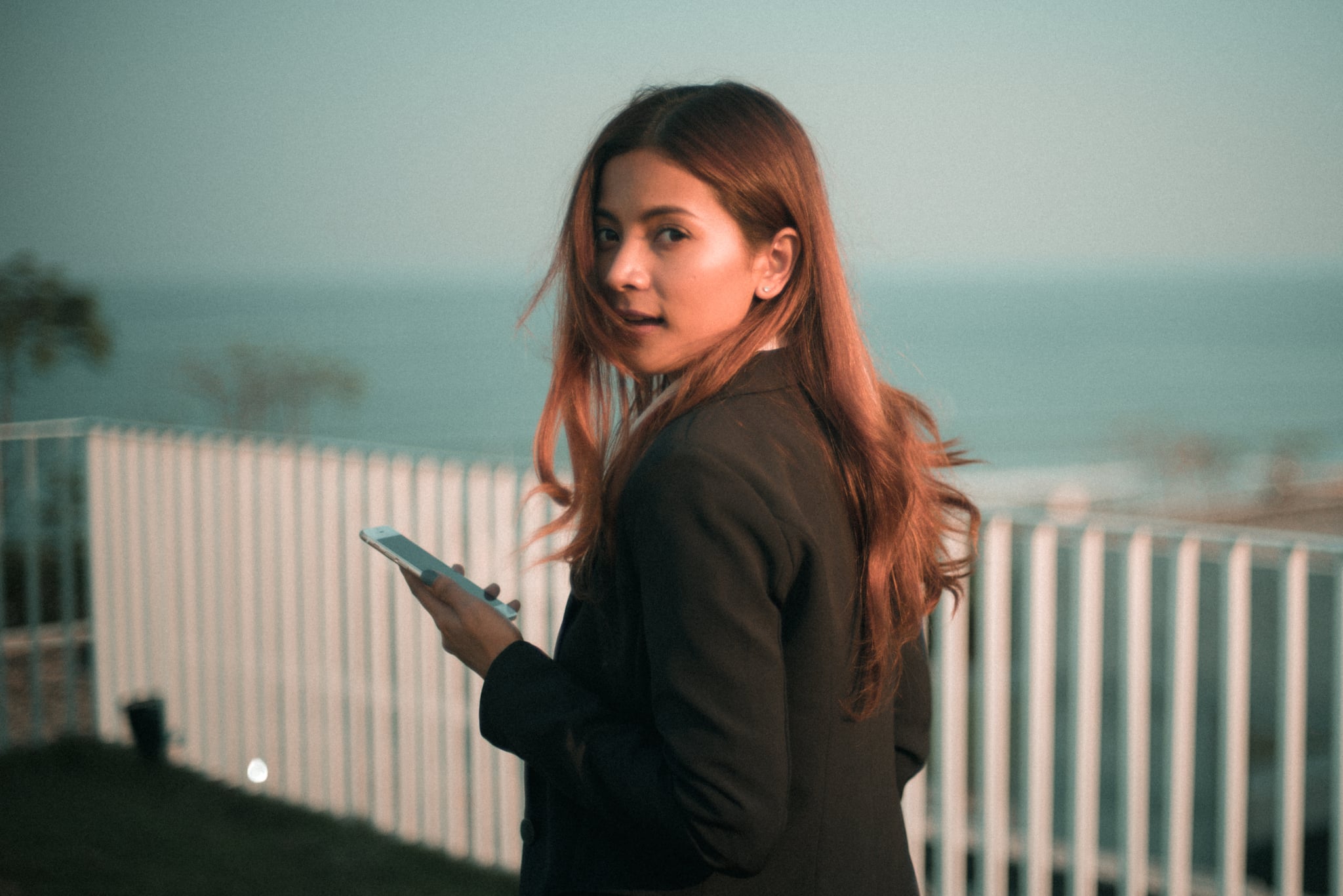 In high school, my friends and I used to call each other's house phones and make sure our parents weren't listening on the other end. We would plan to go to a house party, print out directions on MapQuest (if you even know what that is), and head there following what a piece of paper told us. For me, thinking about prephone GPS times doesn't seem weird, but if I told a teenager that now, they wouldn't even know where to begin.

Although I'm definitely classified as a millennial, I'm a little on the older side. I got my first brick Nokia phone when I was 16 — I didn't even own an iPhone until I was 21 and sipping on my first legal drink. Now my boyfriend has to practically pry it out of hands to get me to pay attention to a TV show. So, yeah . . . you can say I am totally hooked.

I didn't even own an iPhone until I was 21 and sipping on my first legal drink. Now my boyfriend has to practically pry it out of hands to get me to pay attention to a TV show.

Recently, a coworker and I were talking about challenging things we should try, like having someone else dress us for a week and so on. I realised the scariest thing I could do was live without my phone for a day. I figured, why not give it a try? You only live once, right? That is, if I actually survived it. I was supposed to try the task on a Monday, but it took me until Thursday to build up the courage to actually do it. Along with missing texts and social media moments, my number one concern was: how the hell am I going to get anywhere in a city where transportation apps reign supreme? It was the biggest issue holding me back.

Luckily, I live close enough to work that ride sharing apps are supercheap for me. I'm talking less than $4. Living without the luxury of them really scared me because I relied on them almost daily. I initially planned on walking to and from work, which only takes me about 30 minutes each way. I woke up on Thursday and glanced out the window to see it was foggy and sprinkling a little rain. That was all the convincing I needed to head back to bed for some extra snooze time. I decided to order a car from my app and then leave my phone behind at home. This was an odd feeling that left me stressing as I walked downstairs, thinking, "Is the driver trying to call me right now?" and "Am I going to get into the right car?" It was a total breeze.

I spent the car ride gazing out the window. My eyes locked on so many shops and restaurants I had never noticed before on a street I've driven down hundreds if not over a thousand times. I watched the other passengers on their phones scrolling away. Surprisingly, I didn't feel envious of it; instead, I felt appalled thinking that it's how I must look most mornings. I made it to work safe and sound. In my daily lift ride, rather than staring at my screen, I looked at other people and even gave them a smile. They smiled back — what a nice feeling I had forgotten existed.

I headed straight to my computer and started working. Almost instantly, I forgot I didn't even have my phone. I worked so much faster and more efficiently not seeing my screen light up next to me, ripping my attention away from what I was doing. A handful of times throughout the day, my coworkers and deskmates kept asking me, "How are you? How is not having your phone?" Honestly, until someone asked me, I had completely forgotten. It was a total shock to me, and for a reason I couldn't explain, I did not care at all.

I looked at other people and even gave them a smile. They smiled back — what a nice feeling I had forgotten existed.

A colleague later asked me to join her at the mall after work, and I can never turn down a shopping trip. I went with her at the end of the day not feeling rushed to run home and get my phone. Instead, we were fully engaged in conversation, joking, and laughing. We then decided to head to another store that is fairly close to my house. It was then that I realised I had to get home at some point. I hitched an Uber ride with her to our next destination, thankfully just eight blocks from my apartment. That couldn't have worked out better for me.

We said our goodbyes and I started my short journey home. This was the weirdest time of the day because it was the first time I was alone. Normally, I listen to music or make a quick call to my dad on my walks. This time it was just me, myself, and I. I found myself people watching and smiling at those who walked by. Then it hit me: I'd had one of the happiest and most productive days I'd seen in a while.

Admittedly, the second I walked through my front door, I rushed to checked my phone. It was flooded with texts, missed sales calls, and a ton of social media notifications. I quickly glanced at them and made sure everyone knew I was alive. Then I decided to head to my favourite workout class . . . without my phone! For me, the task was over, but I realised I didn't actually miss my phone that much. I was able to make it to and from work just fine. Knowing that I could walk or hop on a bus if needed helped me debunk my fear of not having access to a ride app. I thought about the days when I didn't even have GPS and was printing out instructions on my old PC computer. It seemed so silly that I thought one app could rule my life.

Then it hit me: I'd had one of the happiest and most productive days I'd seen in a while.

I worked so much better without distractions. I found myself engaging in way more conversations than usual. I smiled at strangers. Feeling so motivated, I even wanted to exercise. Who was I?! I went into this experiment with a negative state of mind. I thought I was going to have a sh*t time and miss out on moments that in the end don't even matter. In reality, it may have been one of the best things I ever did. It's the little moments where you're in a car, an lift, or walking down the street where you forget to look up and absorb the world.