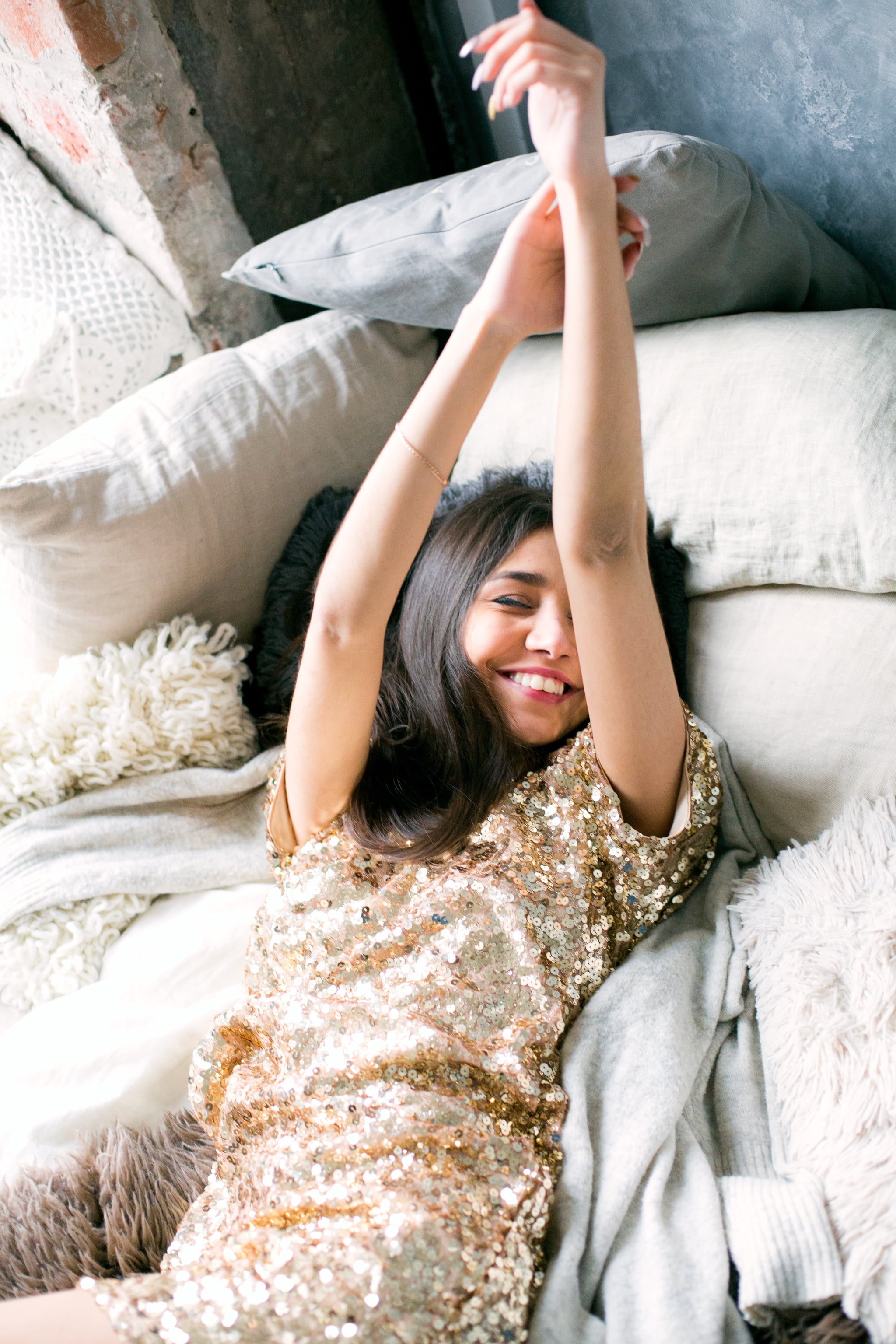 I've struggled with weekend anxiety my entire adult life. The feeling that I should be out doing something – networking, attending industry events, or merely dressing up and hitting the town with my girlfriends because I'm young and that's what you do when you're young. Besides, if I'm not out taking advantage of everything New York City has to offer, why am I spending half of my annual income on an apartment the size of my parent's bedroom?

It's so much more than the FOMO effect (which is still present). I actually feel anxious and guilty if I turn down invitations when I don't have any other plans in the books. The problem with this fear of saying no is it completely wears me out. The holiday season is always an anxiety-ridden time for me (holiday parties, family commitments, constantly attempting to be available for everything so I don't let anyone down), and I went into January with a completely packed schedule. I was quickly approaching burnout mode when my fiancé suggested (lovingly but sternly) that I take the weekend to do nothing.

Related:
22 Hobbies For People Who Really Love to Be Alone

Nothing? It was a foreign concept. But he was going out of town for business, and I would have the apartment to myself. So, I decided to cancel all my weekend plans and focus on self-care. Because frankly, I was exhausted.

Step one – put down my damn phone. I vowed to stay off social media for 48 hours and only pick up my phone with intent, like sending a quick text to my partner or mom.

Hanging out by myself every once in a while is rejuvenating. It was freeing to not be on a schedule.

Step two – slow down, breathe, and relax. As one of those millennials that feels like they have 17 million different jobs and projects in the air at all times, I'm constantly reading advice books and columns about how to be more productive, make more money, or become more skilled. This weekend? I read a fiction novel – one that made no mention of Roth IRAs, Instagram growth tips, or how your personality type influences your professional success. It had been sitting by my bedside table, unopened, for about six months.

My weekend breakfast routine typically consists of an egg white wrap on the go, but this particular morning, I decided to whip out the frying pan and try my hand at breakfast for one. And, no offence to my local deli, but I discovered that I make a mean egg and turkey panini. Later I took a yoga class, followed by a long, leisurely walk around my neighbourhood (sans phone). I stopped in my local coffee shop, aforementioned novel in tow, and read for almost two hours over a chicory cold brew. That night, I opened my laptop for the first time all weekend to write – not because I was on a deadline, but because I was feeling inspired.

Related:
19 Awesome Things to Do Alone

Sunday consisted of another delicious breakfast panini, a crossword puzzle, and whole lot of R&R. All weekend, I ignored any texts asking where I was or what I was doing. The responses could wait until Monday. It was a glorious two days.

Going into the weekend, I feared that not only would I feel guilty or that I was missing out, but that I would get bored spending 48 hours with me, myself, and I. To my surprise, I was completely misguided. It felt good. In a city like the Big Apple, when minutes disappear in a matter of seconds and so many things are constantly going on around you, I discovered how important it is to slow down, check in with yourself, and take the time to focus on doing the little things that refill your well. I'm an extrovert, yes, but I realised that hanging out by myself every once in a while is rejuvenating. It was freeing to not be on a schedule. My to-do list consisted of one singular task: to relax. Come Monday, I felt rested and ready to take on the world again.

I think I'll do this more often.