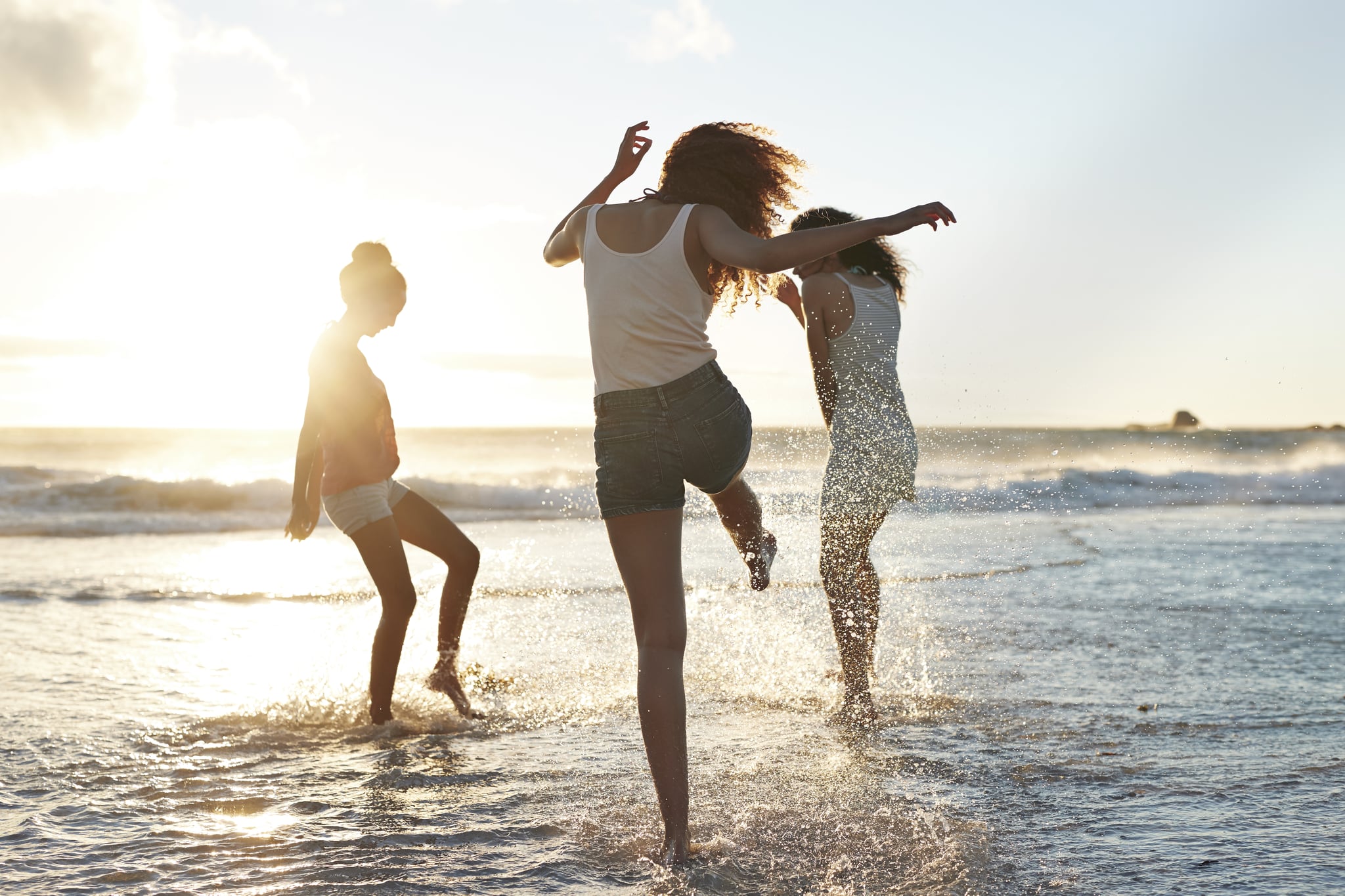 If you were to look at me, you'd probably think, "That white girl needs to get out of the sun," or "Why is that white girl's hair so different?" That's because I'm not white. You wouldn't know to look at me, but I am very much of mixed descent. My DNA results tell me I am — not that I wouldn't know from my my dad's whole side being people of colour. Growing up, no one knew what to make of me. My mom didn't know how to take care of my curly hair, and my dad didn't know how to take care of it either. He would take me to salons where his stylist friend would grease my hair into braids and put little poms in them. And that's just one of many examples that made me feel like I didn't fit on either side.

For the longest time, I didn't really know the difference between my races. My Black cousins and I never questioned why we looked different from each other, we just were who we were. It wasn't until I had a Black neighbour growing up that told me my dad was Black and that I was white. I remember asking my mom why I didn't get to be Black, and she said, "Well, you are." Cue my very first identity crisis. It's a tough pill to swallow to be so young and so uncertain of who you are in the world. You're not one or the other — you're both, and no one knows what to make of you.

I remember asking my mum why I didn't get to be Black, and she said, "Well, you are." Cue my very first identity crisis. You're not one or the other — you're both, and no one knows what to make of you.

As I got older, I started to notice some major differences in my mixed family. My dad's neighbourhood was a little rougher. We could sometimes hear gunshots nearby, and my grandma would make sure we were in the house by dark. The neighbourhood slowly started to become smaller with houses being abandoned and people quietly moving away. Strangers would sometimes talk to my dad like he was an idiot when, honestly, my dad is one of the most intelligent men I know. I never had experiences like that at home with my white mother.

When I started learning about Black history and my family's history specifically, I learned that I come from a long line of people who have fought against adversity. My grandparents fought racism for most of their lives, despite my grandmother's parents trying to shield their kids from the harshness of the outside world. They would drive her and her siblings to the beach instead of letting them see the signs at the pool saying they weren't allowed to be there. They were kept in schools that were predominantly Black as to not experience the shame some of their neighbours experienced in white schools. Can you imagine not being able to step a foot inside a school without being harassed for something you can't control like your skin colour? My family always kept strong, but they knew there was darkness in the world. And that darkness still exists.

When I got to high school, I would tell people I was Black, which was always met with confusion. No one believed me. People would tell me I didn't look Black and would ask to see pictures of my family for proof. Once it was validated by some, they would treat me differently. Not by bullying me in the hallways, but by talking to me in ebonics. "Whasssup girl?" instead of "How are you?" "Fo shizzle" instead of "Definitely." I was treated exactly how you'd expect someone to treat a young, cool Black male — like their "brotha." Tired of being treated like this, I began to change up my style. I didn't want to look like me anymore — I wanted to look like every other white girl. I began straightening my naturally curly hair and fake tanning so I'd look like someone who overbaked in the tanning bed instead of someone who was born mixed. It didn't redefine how people looked at me, but it did make me feel more comfortable in my own skin.

I created a whole character for myself — "white girl with a Black girl personality." Really. And I owned it, too. I wanted everyone to know that I was definitely your favourite white girl but could be what I would call the "sassy Black friend." When new people would ask why I'd act so "ghetto," I'd respond with, "I'm part Black!" Although some people found this character to be charming, a lot of them used it as a way to hurt me.

I was in high school the first time I got called the N-word. A white boy from another school asked me out, and I turned him down. He got angry with me, and so I argued back. He threw the N-word at me like a blow to the face. I remember being in shock and not knowing what to say. What do you say? What's more hurtful than someone throwing the word that carries the most hate right in your face? He called me it again years later when I once again denied him a date.

I dated Black men in college. I felt that I could relate to them more than I could to the white men I dated in high school. There was a time where a white boy came to my room and called me the same racial slur and an N-word-lover. To this day, I don't know what calling me that or using that word did for him.

As I've gotten older, I've realised I'm disgusted by people who use race against others, but I never stood up for myself or for them as best I could. With every murder and case of police brutality, I would cry and scream, but no one ever seemed to listen. Eventually, I just became quiet. Maybe I wasn't Black enough for people to listen, or maybe I was just Black enough for people not to. I don't know. I felt silenced.

But the recent horrific killings of Ahmaud Arbery, Breonna Taylor, George Floyd, and many others have changed something in me. Their senseless deaths have been met with protests all over the country, but I haven't been a part of one. The truth is I just didn't know where to begin. Would showing up to a protest and risk getting tear gassed really be what would help keep my cousins safe on the street? I spoke with some of my family and friends of colour, and I've been educating myself on policies, signing petitions, and more. As things are slowly making a turn for the better, I'm finding my own self-identity. I'm proud of my ethnicity and our determination to win this fight. I'm proud of my skin and my hair even on its craziest days. But I also have my regrets.

I regret joking with people about being ghetto. I regret not feeling comfortable enough in my own skin and owning what Blackness I had. I regret letting people swear at me. I regret allowing people in my life to say racist things simply because I wanted to keep them as a friend. And I regret not signing petitions, donating money, reading policies, and educating myself in every way sooner. But I, too, am learning. I know my privilege has been a lot different than the privileges of my white cohorts, and it's also very different from my Black family and friends. I understand that I'm somewhere stuck in between. I'm joining the fight toward racial solidarity, because I will never be ashamed of who I am ever again.