...so my uncle got a drone now he's fucking with people😂😂😂 pic.twitter.com/xFwnLDUYoa

One man's Halloween prank is terrifying residents of his town and yet absolutely delighting the people of the internet. For his prank, the man attached a Grim Reaper-inspired Halloween prop to a flying drone and gave the prop a leisurely tour of his (formerly) quiet town.

The man's nephew recently shared the prank on Twitter with a caption that read, "So my uncle got a drone now he's f*cking with people." That tweet now has more than 160,000 retweets and 285,000 favourites.

While the prank feels a tad cruel for innocent pedestrians and passersby, we have to admit, it's pretty freaking hilarious. 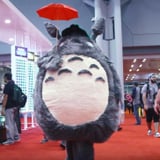 Succession
Even in a Succession Parody, Roman Can't Catch a Break
by Naledi Ushe 21/12/21