When giraffes go to work do you think they put the tie at the top or bottom of their necks?

Asking for a friend. pic.twitter.com/e3cFarF75P

What started out as a comedian's silly question has now caused the internet to absolutely implode.

Jeremy Hammond started it all when he asked his followers, "When giraffes go to work do you think they put the tie at the top or bottom of their necks?" The tweet, posted on Nov. 17 and shown above, even included a hilarious and helpful drawing illustrating the two options — but thousands of retweets later, we're nowhere close to a consensus.

Now, even Chrissy Teigen has weighed in! She argued that giraffes would "clearly" wear ties at the bottom of their necks. 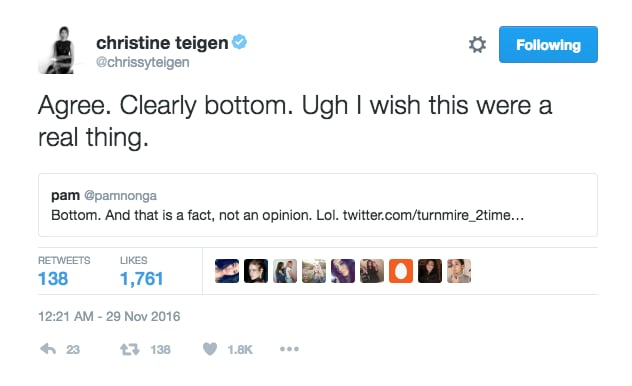 The debate has also inspired her to ponder other similarly confusing questions. How would dogs wear trousers, for example? On the hind legs, according to Chrissy. How would a ferret wear a tube top? They're better off wearing a dress, she said: "8 nips, 4 tubes." Lastly, how would spiders wear pants? Well, she's stumped on that one.

While she might not have all the answers, Chrissy did feel pretty strongly about her stance in the great giraffe debate. If you're like her, let us know how you feel in the poll below.

Related:
A Debate Over the Monkey Emoji Is Tearing the Internet Apart
Would giraffes wear ties at the bottom or the top of the neck?
I'm with Chrissy — clearly the bottom.
Share Your Vote:
Sorry, the top just looks right.
Share Your Vote:
MemesDigital LifeSocial MediaHumorChrissy TeigenTwitter
Around The Web

TikTok
This TikToker Designed Tattoos Inspired by Harry Styles Songs, and I Want Every Single One
by Danielle Jackson 2 weeks ago