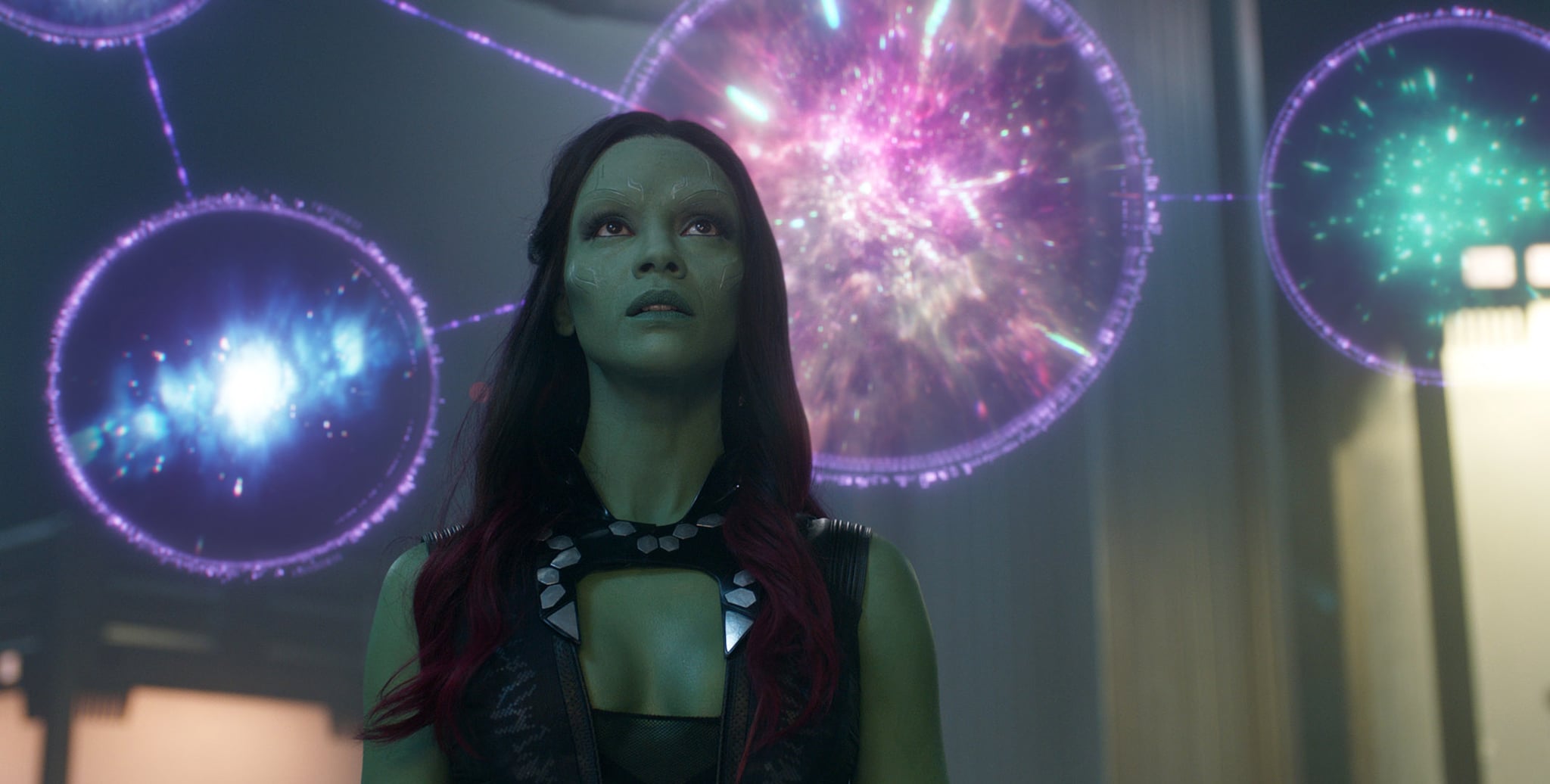 If you haven't heard by now, a lot of people "die" in Avengers: Infinity War. The film is basically a reminder from Marvel that your favourite superheroes are never really safe, and rest assured — we all got the message loud and clear. It makes sense, though. With villains like Thanos hell-bent on destroying half the universe, everyone can't make it out in one piece, right? We had our theories about who would fall prey to Thanos's quest for the Infinity Stones, but the one casualty who took us by surprise was Guardians of the Galaxy's Gamora. Her death is particularly heartbreaking for a number of reasons.

While we've known Gamora, played by Zoe Saldana, is the adopted daughter of Thanos since the first Guardians movie, we've never known the full extent of their relationship. Infinity War dives into the heart of their connection, showing how Thanos invades Gamora's home planet when she's a child and, after decimating half of the planet's population (including her mother), takes her aboard his ship to raise as his own. As Gamora explains in Guardians of the Galaxy, she was trained by Thanos to be the deadliest women in the galaxy. Thanos would regularly pit Gamora against her sister, Nebula, which causes the destructive rivalry between the two that leads to Nebula's attempt to murder Gamora in Guardians of the Galaxy Vol. 2. Sounds like a healthy childhood, right?

While Gamora has never expressed anything but hatred for her adopted father, we get a look at the more complex feelings between the two when they finally come face to face on the planet Knowhere in Infinity War. The Guardians are there to retrieve the Aether (aka the Reality Stone) from The Collector before Thanos can, but they ultimately fail. Gamora, thinking she's murdered Thanos, breaks down sobbing over his dead body. It's definitely not the reaction you would expect from someone who thinks they've finally rid the world of such a huge threat. Sadly Thanos reveals it's all a trick of the Reality Stone, which he uses to distort reality and only make it look like he's died. In actuality, he's never been better, and he wastes no time incapacitating the other Guardians and kidnapping Gamora.

On Thanos's ship, the dysfunctional father-daughter pair verbally cut into each otherm as Gamora tells him she's always hated everything about her childhood. Thanos points out how he saved her from a life of severe poverty and pats himself on the back for raising her to be such a badass. Honestly, if the situation were less intense — and Thanos and Gamora weren't purple and green, respectively — it could pass as a regular conversation between an exasperated father and his frustrated daughter. Of course Thanos sours the mood by bringing up the initial mission he sent Gamora on to find the Soul Stone. Though Gamora attempts to lie her way out of it, he later reveals a captured Nebula and tortures her until Gamora is forced to confess that the stone is located on the planet Vormir. 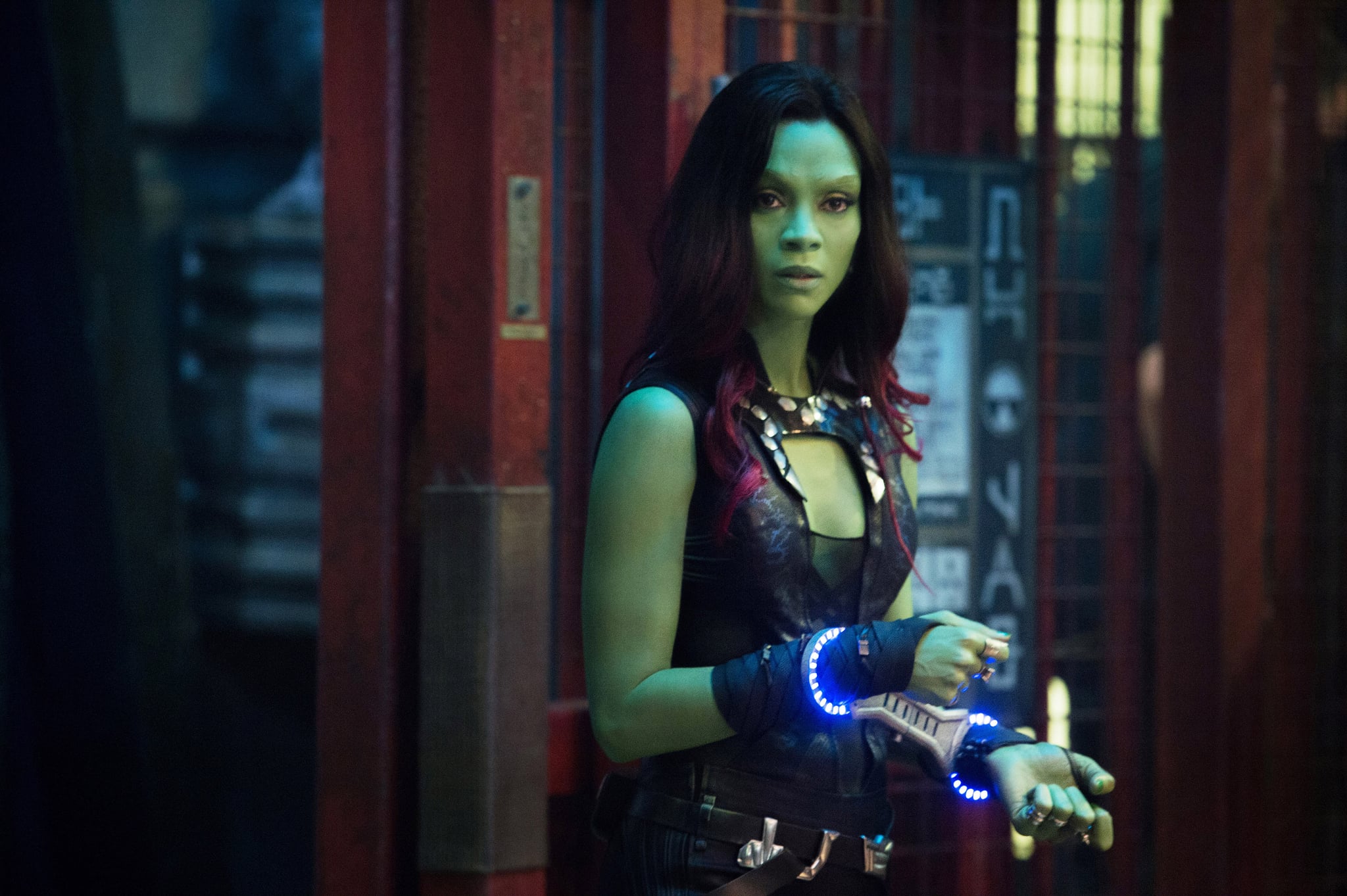 The pair journey to the planet and once they've been guided to the top by a very interesting (and familiar) character, Thanos is told that in order to receive the stone he must provide a sacrifice. The Soul Stone demands a soul for a soul, and it must be a loved one. Gamora taunts Thanos, believing his quest has kept him from loving anyone or anything and that he's failed. But she's wrong. She visibly goes into shock when Thanos turns to her, crying, and realises that his loved one is her. Though she attempts suicide before he can make the necessary sacrifice, Thanos is able to throw her over the cliff, sending her to her death and getting his fourth Infinity stone.

But that isn't the last time we see Gamora. In the end, after Thanos has collected all six Infinity Stones and snapped his fingers, wiping out half of the universe, he wakes up in what appears to be another dimension. Young Gamora is there, and she asks him if he did it. When he responds in the affirmative, she asks him what it cost. Thanos tells her, "Everything," and Gamora turns away from him, saddened.

Since we don't know much about the Soul Stone's abilities, we can only speculate about what that scene means. Is Gamora's soul residing in the stone, and that's why Thanos was able to speak with her in the end? Could her soul be retrieved from the stone? Would that mean another sacrifice has to be made? If time were reversed, would her soul go back to her body?! While we don't know the answer to any of these questions, we do know that Gamora will be making an appearance in Avengers 4. So, we'll just have to wait until 2019 to see where her story truly ends.