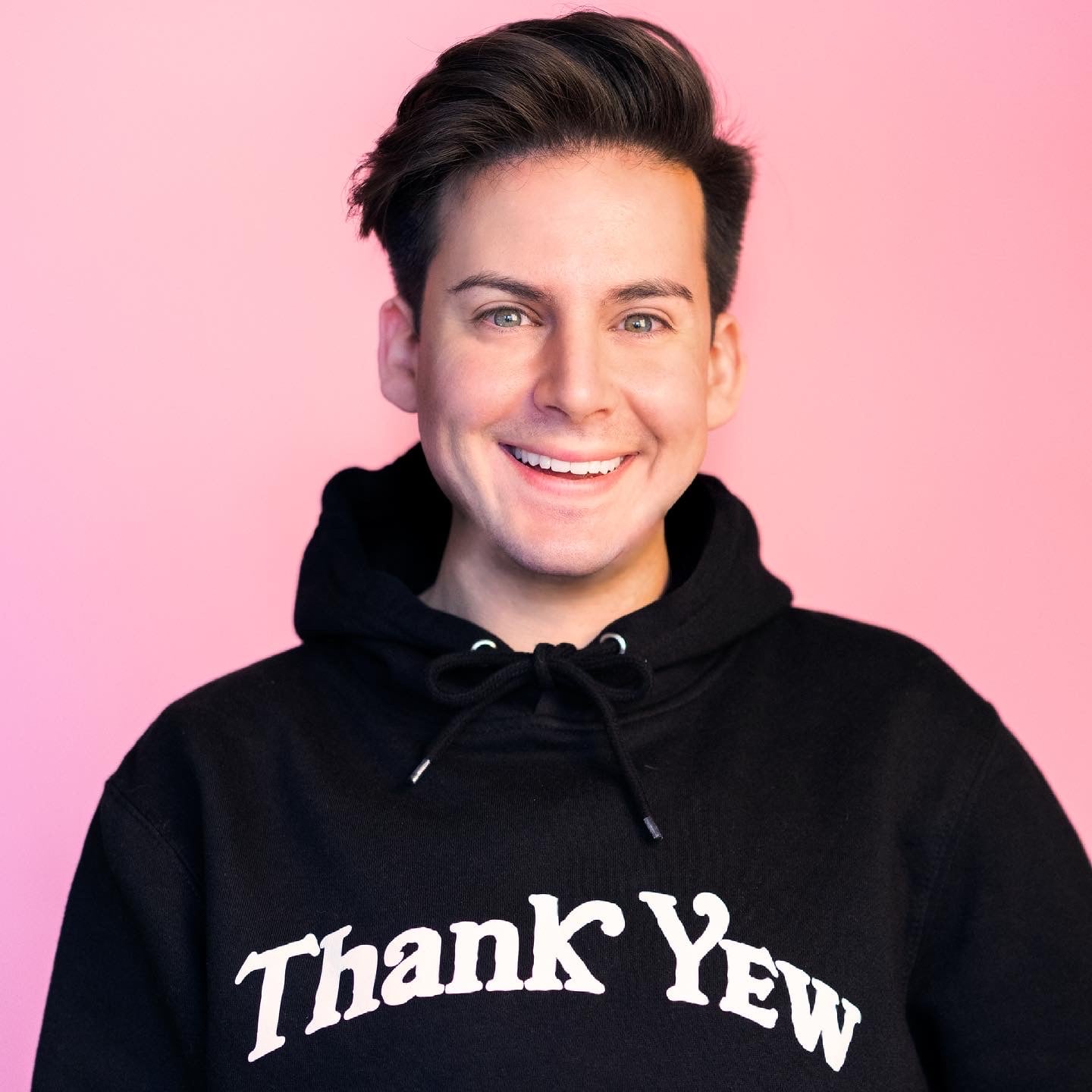 There are no o's or u's in Josh Zilberberg's version of "thank you" — he pronounces the everyday pleasantry in his own, unique way that unexpectedly earned him nearly two million devoted followers on TikTok. A 27-year-old Toronto resident and the reigning CEO of "thank yew," Josh became one of many comedic relief sources amid the pandemic when his relatable videos became FYP staples. In celebration of Pride Month, I chatted with Josh about his experience as an LGBTQ+ creator, finding love, living his most authentic life, his merch collection, and so much more.

Josh's journey to joining TikTok is not entirely unlike that of many 20-somethings, myself included. He was initially "really hesitant" because the platform is filled with throngs of younger users hitting dance moves he admittedly couldn't master, but merely 24 hours after finally downloading it in 2019, it became his most-used app. "It just really sucked me in," Josh recalled. His content has certainly evolved since then — after posting dozens of hilarious lip-syncing, green screen, and "POV" videos, his signature "thank yew" made its debut to the tune of nearly 8 million views in September 2020, and the followers came pouring in.

Any advice is appreciated

"It's literally so me that it's kind of crazy."

The distinctive flair with which he says "thank you" isn't an act, though; Josh assured me that his "vocal fry" is au naturel. "The way I enunciate words has always been a little bit dramatic. I didn't contrive that for TikTok," he explained. His overall presence on the app is also far from a feigned persona. "It's literally so me that it's kind of crazy. I'm really not putting on this extravagant character. I have always had the reputation for being that friend that will say what everyone is thinking when everyone else is sort of just biting their tongue. I'm the one with no filter that just, word vomits, always."

Josh brings his catchy tagline and applaudable candor to videos that address topics like singledom, lacking in dance rhythm, and working-from-home woes, the latter of which he's become intimately acquainted, seeing as Toronto residents have been under what seems like a perpetual lockdown for the past year. His commentary on dating is particularly relatable, as he playfully discusses being ghosted (been there), falling for the wrong person (also been there), and pretend-dating someone who, in actuality, has no clue you exist (yep, also been there). Although these occurrences can be disheartening to experience, Josh prefers taking the humourous approach. "If you can't laugh at it, then you can't take it seriously," he said. "I'm clearly not the only one going through all of those things, and at some point, you just have to laugh."

"I was just like, 'What about the rest of us who still care about all these major problems but also can't get a date on a Saturday?'"

After realising that his videos were resonating with thousands of other single TikTokers, Josh found comfort and reassurance in opening up about his dating life. "I had no idea that so many people felt the same way that I have felt for so long," he told me. "People forget that with COVID, there's still the people who have the day-to-day struggles of just being in their 20s. I feel like I sort of spoke to that gap in the content that I was seeing on TikTok. I was just like, 'What about the rest of us who still care about all these major problems but also can't get a date on a Saturday?'"

And that’s on being ✨crazy✨

This message has a deeper meaning that, for Josh, is especially relevant during Pride Month. "My fans are such a split between people from the LGBTQ community, as well as straight people," he said. "Instead of all of this divisive rhetoric and language that I feel has been going around for so many years, it's important to note that love is love, and we all feel the same emotions. We're all human . . . Even though we like to label ourselves or put ourselves in these different boxes, at the end of the day, we're all people."

Somewhat ironically, whilst churning out quick selfie-style snippets about having a tough go at relationships, Josh wound up entering into a new one a few months ago. (Yep, you heard it hear first, folks!) "It's so funny that, after all of the things that I was posting on TikTok about being single, I met someone who didn't even know existed. It's going really well, so fingers crossed. I'm still waiting for the other shoe to drop," he joked. Josh teased that his boyfriend will be "making an appearance very soon" on TikTok to celebrate Pride. "We think it's super important as members of the LGBTQ community to show that love comes in all different ways, shapes, sizes, and forms." Fans can rest assured that even though Josh is no longer on the market, he'll still be joking about his dating life, but it'll likely be in the past tense to keep things as truthful as possible.

Related:
Celebrate Pride Month on Loop With These 47 Bangin' Songs

As an LGBTQ creator on TikTok, Josh expressed that he's dealt with a few isolated instances of homophobia since gaining popularity on the app. "I feel like 99.9 percent of the time, the algorithm is so spot-on and it reaches its intended audience. However, sometimes a different account might repost [my videos] on Instagram, and maybe that account caters to a different audience, and I will see more homophobic comments." However, he opts for the brush-it-off method when keyboard warriors attempt to dull his shine. "Either I dismiss it as stupid or don't read [hate comments], because all they're going to do is damage me," he said.

I have merch now thank yew

Josh also mentioned another slight downside to gaining TikTok fame: the pressure to constantly entertain his audience with new content. Between his full-time job at a luxury furniture company, side projects related to TikTok, and his personal life, it can often be tricky to find time to brainstorm fresh, on-brand ideas, but he makes sure to prioritise his mental health. "Sometimes you have to take breaks, not because you don't want to deliver content, but because I would rather not post than post something sub-par," he said. "I'll get anxiety about it, and I sometimes do lose sleep over it, but I consciously have to remind myself that I'm a human and even people who are working crazy, really important jobs are entitled to holiday time."

"The reason people will want to buy into you is that you're you."

One of Josh's aforementioned TikTok-adjacent side projects is his merch collection, which he launched after noticing some followers begging for "thank yew"-themed hats and hoodies. He advises that anyone looking to monetize their TikTok presence should not only check in and engage with their fans' comments to see what they want, but also stay true to themselves with whatever partnerships or projects they pursue. "Don't sell out, because the reason people will want to buy into you is that you're you," he said.

When I asked Josh if he has any general advice for TikTok stars, regardless of monetization goals, he hearkened back to the notion of genuineness, a quality that radiated from him for the entirety of our video chat. "Put out original content, because the second that you start chasing a trend is the second that you're competing with you and every third person on the app, all doing the same dance or lip-syncing the same sound or doing the same challenge, or whatever it is," he said.

So, what's next for the CEO of "thank yew"? Although he's still processing his meteoric rise to TikTok stardom, he hopes to eventually segue into the entertainment industry in some capacity, possibly writing for comedy, doing standup, or even hosting his own talkshow. "I guess we'll see when the world starts to really open up," he told me. "Who knows where it will go?" I may not have the crystal ball to predict that, but I can sure as hell confirm I'll be along for the ride — even for the occasional stop at his favourite destination, rock bottom.