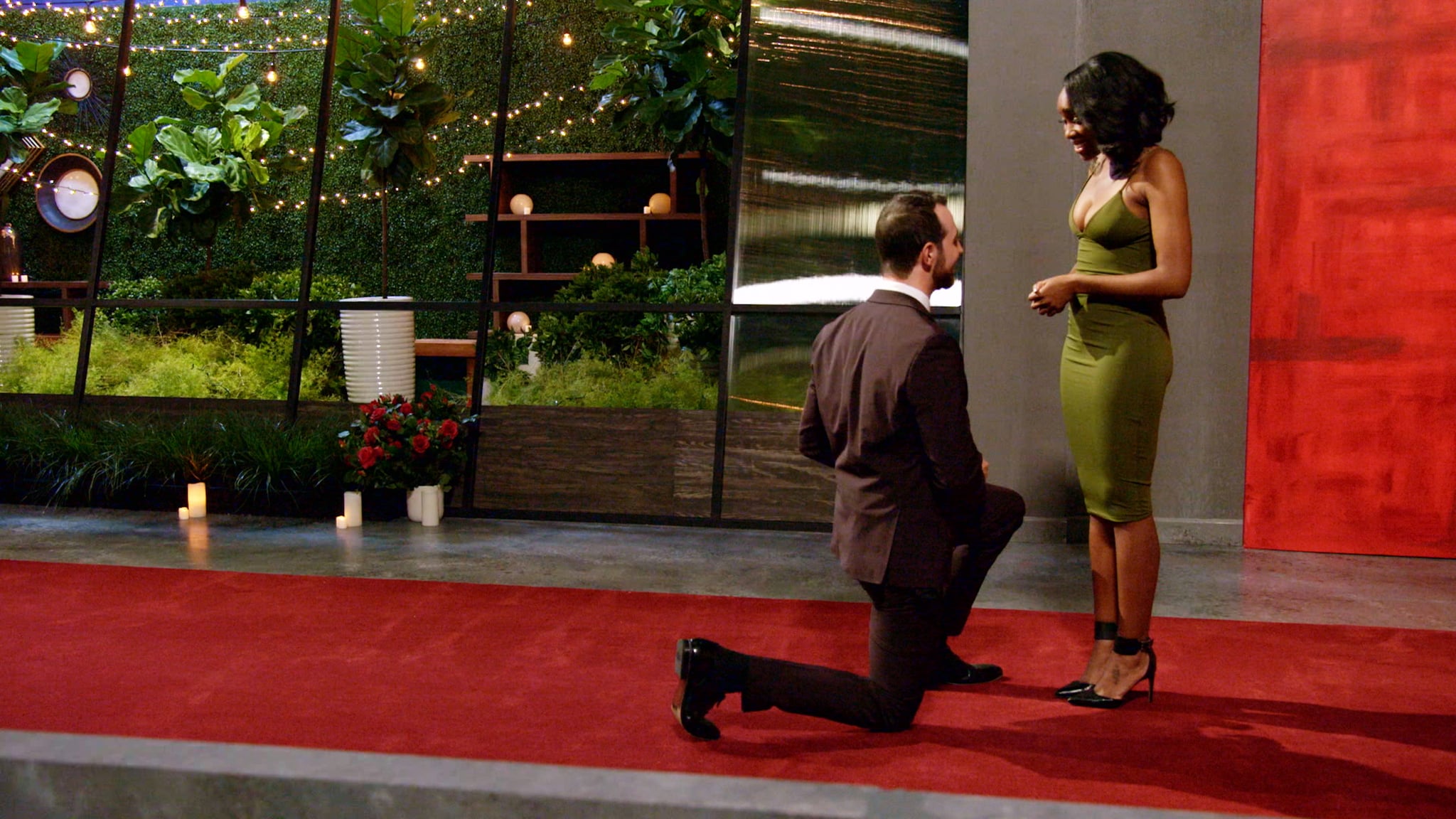 Netflix's Love Is Blind is changing up the dating show game with its new approach to finding love, but I just have one suggestion for producers: can we eliminate the proposals? Look, I totally understand that the engagements are one of the show's biggest draws, but they're actually putting pressure on the contestants and forcing them to make one of the most important decisions of their lives without being totally ready.

The intention of Love Is Blind is for people to make a "meaningful connection" with someone without actually laying eyes on them, but the contestants aren't really given the platform to fully explore that connection because they're so caught up with the engagement and the wedding. When they're in the pods, they're focusing on whether someone will propose to them, and when they do get engaged, they're busy stressing about whether they actually want to spend the rest of their lives with that person. Where is the part where they just get to enjoy their relationship?

They literally go from dating multiple people for a few days to getting engaged. How does that even make sense?

Take for instance, Jessica, who got engaged to Mark even though she was having doubts and was ready to get engaged to Barnett just the day before. An engagement really doesn't seem like the best idea, does it? Instead, Jessica should have been given the option to just date Mark exclusively and still go through all the steps without having to make such a big commitment so early on. I mean, what's wrong with good, old-fashioned dating? After all, the couples on the show haven't even had a chance to date each other as boyfriend and girlfriend. They literally go from dating multiple people for a few days to getting engaged. How does that even make sense?

Not to mention, an engagement usually happens when two people are in love and they want to make a formal commitment to each other that will eventually result in marriage. However, in this case, the importance of it is removed because the couples are still given the option of breaking up, so it's not taken too seriously. Like Jessica, for example, kept sliding her ring on and off because she didn't even know if she wanted to be with Mark half the time. Now, I understand that not everyone who gets engaged makes it to the altar, but most people are pretty confident with their decision when they say "yes" to a proposal in real life.

Related:
Love Is Blind Has Inspired These 25 Truly Iconic Memes

Also, on the show, a proposal doesn't actually guarantee that the couple is going to get married in the end, so what's the point? Just look at Mark and Jessica (I'm sorry I keep bringing them up, but they really are the best example)! I'm sure if Jessica and Mark hadn't gotten engaged, Mark probably wouldn't have been as heartbroken and she wouldn't have left him at the altar (which was honestly so brutal to watch).

We've seen this exact situation come up for years on dating shows like The Bachelor, so isn't it time we switched things up? Colton and Cassie didn't get engaged on the ABC series and they're still together, and more recently, Peter ended up calling off his engagement to Hannah Ann. The pressure of a proposal doesn't really work anymore because people don't see it as a real binding agreement since we've seen it countless times before. Times are changing, and people really aren't in a hurry to get married anymore. According to The New York Times, young adults are taking more time to get to know each other before settling down. A 2018 study conducted by eHarmony also found that "American couples aged 25 to 34 knew each other for an average of six and a half years before marrying, compared with an average of five years for all other age groups."

Look, I'm not saying we should change the entire premise of the show. Contestants can still meet through the pods, go on holiday, and live together, but I'm just saying that removing the proposals might make the process work better. I mean, it may even result in couples actually staying together.