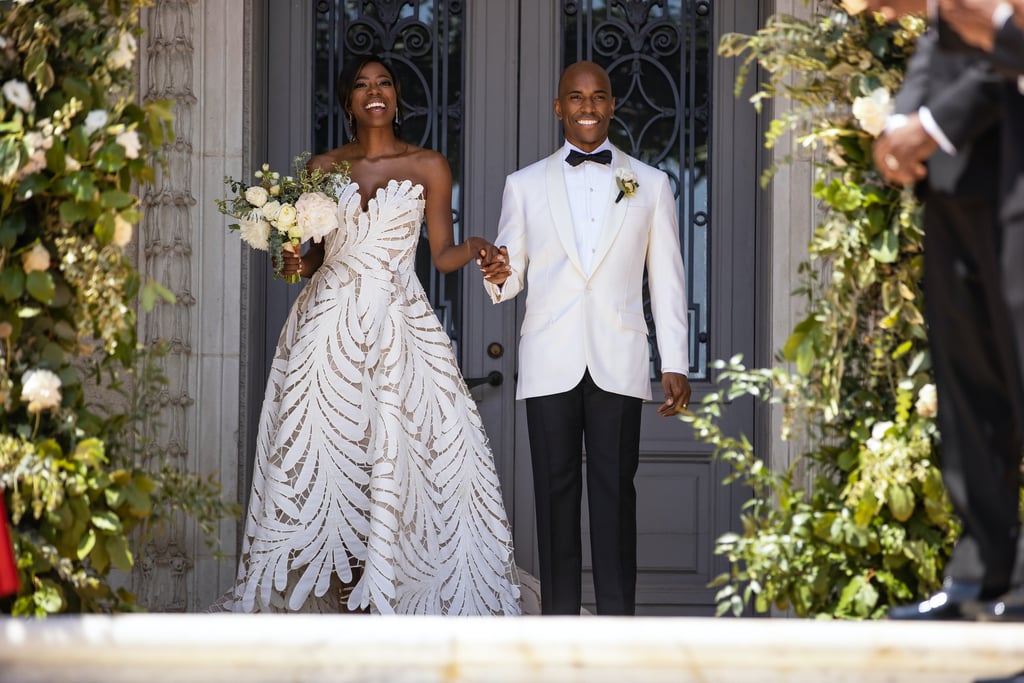 The epitome of growth. On Dec. 26, Insecure wrapped up its fifth and final season, giving fans closure and characters happy endings in a string of flash-forwards. While the show has been centreed around Issa Dee (Issa Rae), it's her group of girls and their professional and personal plot lines that have kept us locked in since 2015, which is why it was so important for the finale to touch on each of them. But we're here to talk about Molly (Yvonne Orji) and Taurean (Leonard Robinson) and their beautiful love story that was complete with a stunning Oscar de la Renta wedding dress.

Fans were ecstatic to see Molly and Taurean tie the knot in a gorgeous European ceremony accompanied by bridesmaids in red dresses, a tear-jerking father-daughter dance, and a beautiful tribute to Molly's late mother. Molly was breathtaking in an Oscar de la Renta fern gown. The strapless embroidered dress featured a sweetheart neckline and a full corset back. And the symbolism of the fern dress did not go unnoticed, as ferns typically embody feelings of new beginnings and hope for the future.

In an Instagram post following the finale, Yvonne gave a shout-out to Molly and Taurean's love story, but also acknowledged that the real full-circle story was between Molly and Issa. "For FIVE seasons, @the_a_prentice told me, 'when Molly finds happiness, the show is over,'" she wrote about a conversation with Insecure show runner Prentice Penny. "Well, he kept his word. @issarae, Molly might have married Taurean, but you will always be her one true love." When Issa helped Molly take off the intricate corset holding up her dress, fans teared up knowing they had been through it all together and have never been stronger. Ahead, check out photos of Molly's radiant Oscar de la Renta fern wedding gown, and get excited for the future of the characters. Now go explore Greece, Molly!

Euphoria
Did You Catch That Game of Thrones Easter Egg on Euphoria?
by Monica Sisavat 5 days ago