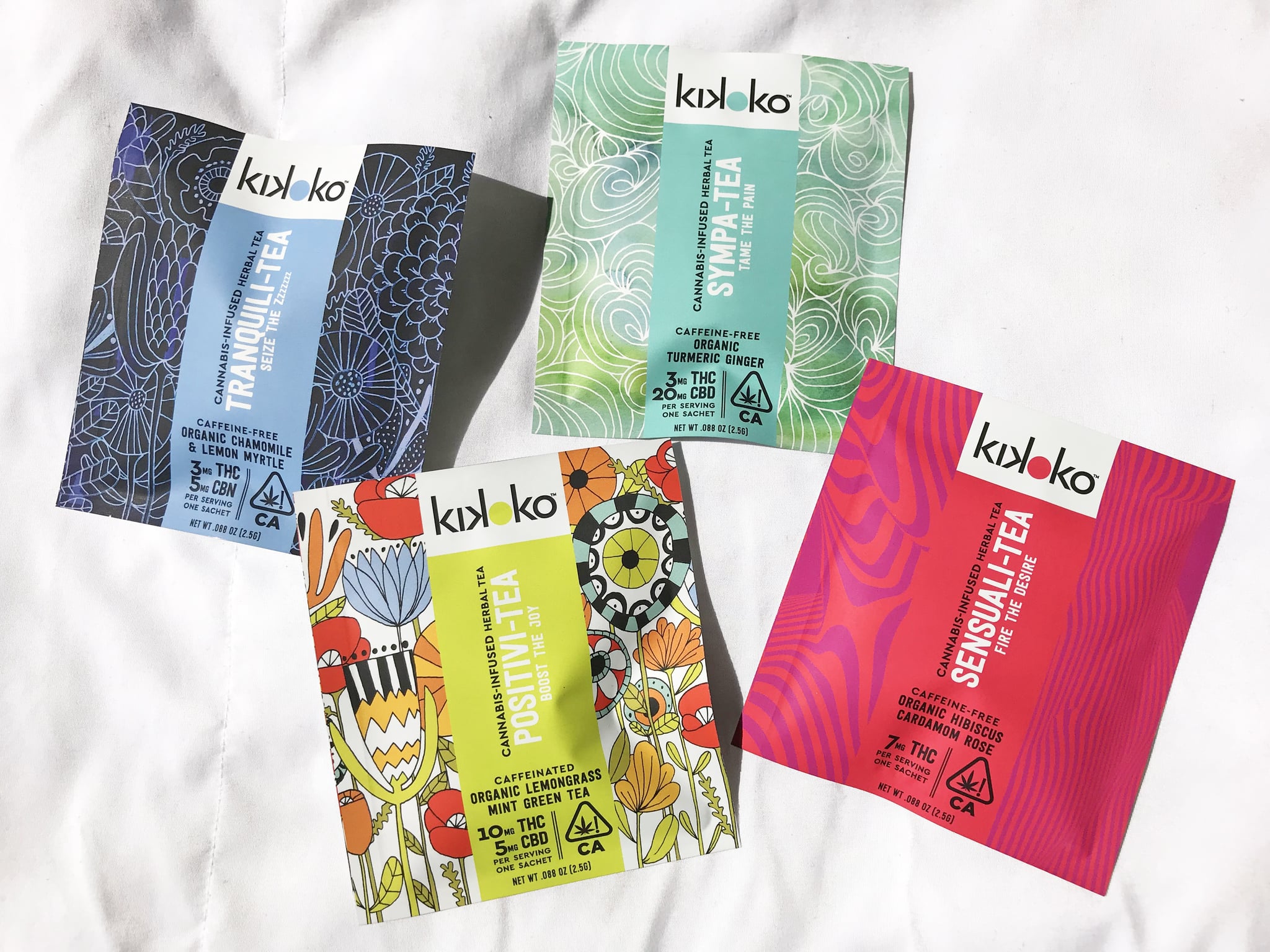 Even if you are open-minded about the benefits of cannabis, popular methods like eating edibles, smoking, or vaping can seem intimidating. But how about sipping on a cup of tea? Founded by two women who wanted to create a wellness product that was female-friendly, Kikoko cannabis-infused herbal teas are low-dosed, great-tasting, and completely unassuming.

"We consider ourselves to be part of the destigmatization movement, bringing it out of the drug realm and into the wellness realm," Kikoko co-founder Amanda Jones told POPSUGAR. "We wanted to create something that was already a health ritual."

Each tea contains a blend of organic, herbal ingredients as well as a cannabis active (amounts vary by tea). Kikoko's founders Jones and Jennifer Chapin worked with a team of scientists and an artisanal tea expert to create delicious blends with precise doses. Kikoko's formula starts with cannabis oil, but its proprietary drying methods ensure that there is no cloudy film or weed-like aftertaste. After much research on herbal medicine, the Kikoko team selected the best ingredients to specifically address each blend's purpose. Each tea has a different ratio of cannabinoids (some with more CBD to offset the amount of THC and so forth). Consumers have the option of the following four teas:

This organic, lemongrass mint green tea is the only caffeinated one in the group and it's also the strongest. We don't recommend newbies starting out with this one. Each sachet of Positivi-Tea contains 10 milligrams of THC and 5 milligrams of CBD, as well as peppermint, green tea, spearmint, licorice root, lemon myrtle, lemongrass, and safflower petals.

Positivi-Tea was one of the two I tried out firsthand, and I was pleasantly surprised at its potency and great flavour. It took a little under one hour for me to begin feeling the effects, and while I was enjoying a noticeable high, I didn't feel too stoned. I'm regular cannabis user, I was still able to fully feel the tea's effects.

Related:
I Tried These Sex-Enhancing Weed Chocolates, and WHOA

Sympa-Tea (For Pain and Anxiety)

This organic, ginger orange tea has the highest amount of CBD (20 milligrams of CBD and three milligrams of THC). You won't feel much of a psychoactive high; instead, you'll notice the muscles in your body relieved of tension and pain. CBD is also known to combat symptoms of anxiety, making Sympa-tea ideal for relaxation. This blend contains ginger, tumeric, ginger peel, black pepper, star anise, cinnamon, and licorice root.

About 50 minutes after drinking a cup of Sympa-tea, I felt a very subtle high that could've easily gone unnoticed if I wasn't looking for it. I did, however, note full-body relaxation and felt as though a weight was lifted from my chest and shoulders. Although I definitely preferred the flavours of Positivi-Tea to this one, there was still zero taste of cannabis.

Wind down with a cup of caffeine-free, chamomile and lemon myrtle tea before bed. If you're a regular cannabis user, you'll barely feel the three milligrams of THC (if at all) in Tranquili-Tea. But the blend also contains five milligrams of CBN, which is cannabinoid known to induce sleepiness. Jones herself has completely replaced her night cap with a cup of Tranquili-Tea, especially since it doesn't cause grogginess or any hangovers the following morning. Each sachet has peppermint, chamomile, valerian root, lemon myrtle, licorice root, rosemary, lemongrass, lavender, and cornflower petals.

Kikoko teas was inspired by a dear friend of Jones and Chapin. When Jan got terminal ovarian cancer, she was using cannabis to alleviate her nausea and pain, help with her appetite, and to better her mood. As someone who didn't want to smoke cannabis, Jan looked to edibles instead. But this was also three to four years ago when edibles were not regulated and were often high dosed.

"They were really made for the male market and the stoner market, or the habituation market, and they were just knocking her on her ass," Jones told us. "It was her idea really; she was a very sophisticated women, and she said there needs to be a product that is cannabis but it's reliably dosed for women, and it's a wellness product, and it's beautifully packaged or at least tasteworthy."

And then, Kikoko was born. When Jones began her research into the benefits of cannabis, she was both amazed and angry at the information she came across.

"I was frankly really pissed off that this plant had been made illegal in the 1930s because of big industry lobbyists who made cannabis illegal and succeeded in vilifying what is a natural plant medicine that has been used by every major civilization in recorded history."

Jones and Chapin agreed that their product needed to bring the THC levels down, to make it as user friendly as possible.

"We consider ourselves more of a wellness product than a get-high product," she said. "Now, you will get high but you'll never ride the crazy train."

Steeping the tea bag longer also doesn't increase its potency. Although Kikoko recommends steeping for three to five minutes for flavour, you won't have to worry about accidentally leaving it in for too long. Since everyone's metabolisms differ, onset time can range anywhere from 30 minutes to 90 minutes. But make sure you give yourself some time before adding a second bag to your cup! With some of the more CBD-heavy formulas, you may not even feel a "high."

Image Source: POPSUGAR Photography / Nicole Yi
Any cannabis products referenced above are not intended to diagnose, treat, cure, or prevent any disease. The writer is not a medical doctor, and their experience is based on personal use, the results of which may not be typical or intended. The legality of cannabis products varies by state, and readers are encouraged to check their local laws before purchasing and using cannabis products. Nothing in this article should be construed as advice regarding the legal status of cannabis products. Any views expressed in this article by a third-party sponsor are those of such sponsor, and do not necessarily represent the views of POPSUGAR.
WellnessHealthy LivingMarijuanaTea