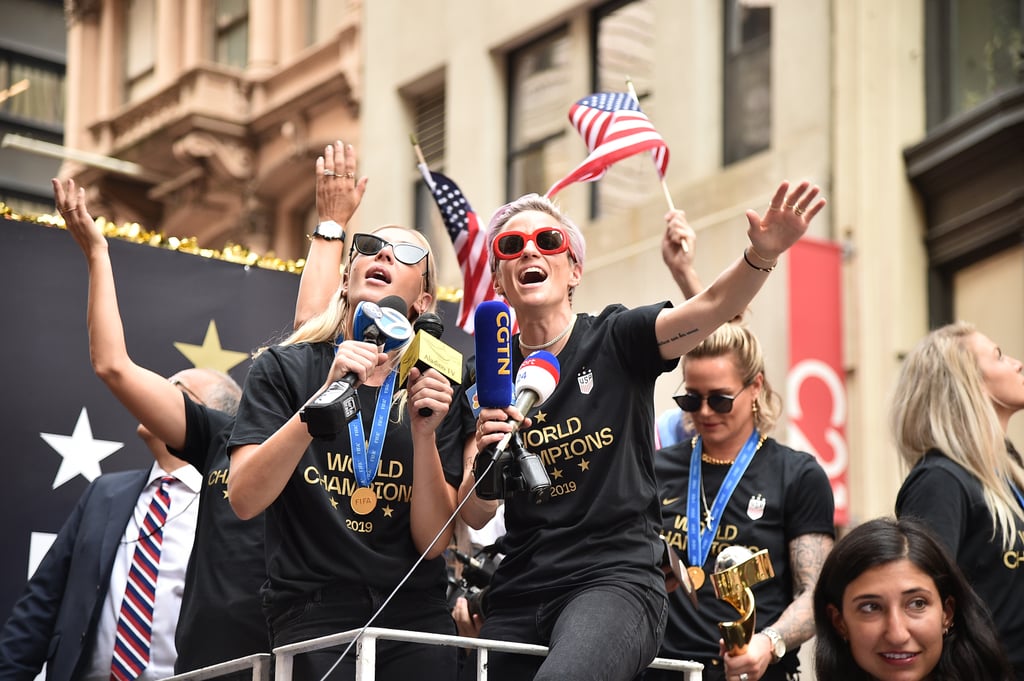 Champagne and confetti are in store for the US Women's National Football Team. The 23 kickass players came home after their record-breaking World Cup win — here's a list of records the team broke if you need a refresher. They've been celebrating ever since, and June 10 marked a crowded and well-deserved ticker-tape parade in Lower Manhattan. On the US float, clad in sunglasses, medals, and "World Champion" t-shirts, stood Megan Rapinoe, who won the coveted Golden Boot for most goals and Golden Ball for the best player in the tournament, along with teammates Alex Morgan (Silver Boot winner) and Rose Lavelle (Bronze Ball winner). Greats like Carli Lloyd and Julie Ertz joined them.

If you missed the parade, there was lots of confetti (duh) and power poses from the team. Also, team members, including Crystal Dunn, started an "equal pay" chant. We'd expect nothing less from the team whose platform at the World Cup brought attention to the US Football Federation gender pay gap. At one point, Alex sprayed the crowd with Champagne — which, if we could guess, felt like being showered with fearlessness. Ahead, check out pictures from the parade that will warm your heart and make you even more proud of these great women.

Related:
Calling the USWNT "Arrogant" Is Infuriating to Any Girl Who Played Sports, and Here's Why
Previous Next Start Slideshow
Women's World Cup 2019AthletesWorkoutsSoccer

20-Minute Workouts
Want to Burn Calories With No Impact? This 20-Minute Sliders Workout Is the HIIT You Need
by Maggie Ryan 13 hours ago

cardio strength workouts
Get Sweaty, Strong, and Shredded With This 30-Minute Cardio and Abs Ladder Workout
by Jenny Sugar 20 hours ago